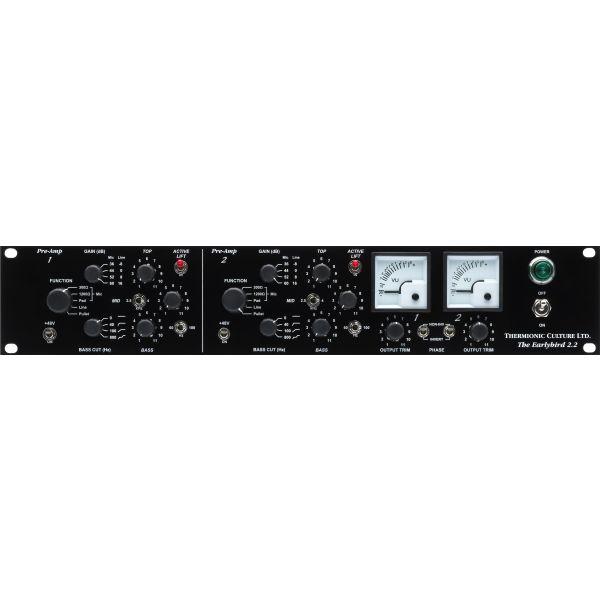 The microphone amplifier is arguably the most important part of the audio chain, yet it is here that solid state technology is weakest in most mixing desks.

The Thermionic Culture Earlybird 2.2 has been developed to be simply the best mic amp you can buy. Because of the special balanced push pull double triode circuit, it is virtually silent and distortion free, and has a very open, clean yet warm sound. The extended frequency response and lack of phase shift make it ideal for classical or rock recording.

The Earlybird 2 has a simple yet very effective eq for top, mid and bass in the feedback circuit (switchable). The high pass filter has been designed so that it works conventionally at lower settings, but on the 2 highest settings is gentler, and provides a mid cut when used in conjunction with the active bass lift.

The Earlybird 2.2 does not have to sit idly by on a mix! A separate line in socket is provided so that it becomes a valve eq and can produce a wonderfully warm distortion if required. The Output Trim control is placed after the electronics (as on The Phoenix ) and if turned back to a low setting, The Earlybird 2 can be overdriven by increasing the Gain setting.

Some Cultured users...
Because of their unique blend of flexibility, musicality, and usability, brought about as a result of being hand-built by some of the worlds leading pro audio valve equipment designers and engineeers, Thermionic Culture products attract their fair share of high profile, industry leading producers and engineers from the world of recording technology. Here is just a handful - why not add your name to the list?

Please fill out the form below and a Vintage King Audio Consultant will contact you with a ship date for the Thermionic Culture Earlybird 2.2 Two-Channel Tube Preamp/EQ.

Have a better price in mind for the Thermionic Culture Earlybird 2.2 Two-Channel Tube Preamp/EQ that you've been checking out? We're willing to work on it!Please fill out the form below with your contact information.Once the form is submitted, a Vintage King Audio Consultant will contact you as soon as possible with our best price on this product.