$ 17,990 .00
Your Savings: $ 2,698 .50 Msrp: $ 20,688 .50
or $403/month for 60 months Based on 60 monthly payments of $403 on approved credit (OAC). Learn more about leasing
Ships directly from Telefunken Elektroakustik
Note: This item may not be returnable or could require a restocking fee. Contact one of our Audio Consultants for more details. This item ships directly to you from the manufacturer. To ensure that the manufacturer currently has stock, please chat, call or email for the latest availability status. 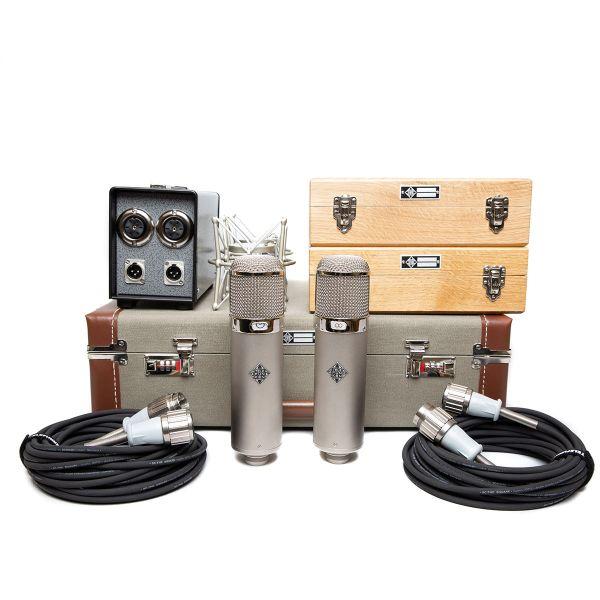 The TELEFUNKEN Elektroakustik U47/U48 Stereo Set is a matched pairing of one of each of the famous U47 and U48 tube condenser microphones. The largest difference between the modern versions and what was available in 1958 is that the sets from 1958 were not "matched." Now they are! Each component is matched for sonic characteristics. The M7 capsules are hand selected and tested for consistent behavior in TELEFUNKEN's Connecticut laboratory, along with matched custom BV8 output transformers, VF14K tubes as well as the more mundane resistors and capacitors. Additionally, a special serial number group has been created for the modern version of the "Studio Set" making these a very rare set of birds which are not only unbelievably useful, but also rare and collectible.

Upon first glance of the new U47 from TELEFUNKEN Elektroakustik, it's easy to see the "family resemblance." The large, chrome head grille houses a newly manufactured M7 capsule. Its matte nickel finished body houses a new BV8 output transformer and a newly developed VF14k vacuum tube; a "plug and play" replacement for the rare VF14M tubes found in the original. The classic "TELEFUNKEN" diamond logo proudly adorns the front of the body tube. All of these accoutrements show that this microphone means business.

Since its original development in 1946, the TELEFUNKEN U47 has been the microphone of choice for generations of recording professionals. The first condenser microphone to offer selectable polar patterns (cardioid and omnidirectional), the original U47 also featured the famous M7 capsule which had been developed in 1928 by Georg Neumann. To this capsule was added an amplifier built from military surplus VF14 tubes (they had been used in field and aircraft radios), and BV8 output transformers. The combination of these components created a sonic quality that was absolutely unheard of in the English speaking world of the mid-1940s when darker sounding, less detailed ribbon microphones were the standard. The introduction of the U47 brought a new level of fidelity to the audio world, and is still considered to be one of the finest microphones ever produced.

Whether you're recording a symphony, a "crooner," or any facet of modern music, you'll find a great tool in the U47. Its authoritative mid-range and extended low-end response dance from your ears... much as a vintage wine dances from the palate. Everything, from vocals to the loudest of guitar sounds, full on orchestral recording, beautiful backing vocal arrangements, or a chamber ensemble will benefit wildly from the rich and vibrant tone of this stunning microphone.

10 years after the development of the ubiquitous U47, the U48 was released with one variation to the U47; it had "bidirectional" (figure 8) capability. The bidirectional capability can be very useful in more "ambient" recording environments where the engineer recording the sound does not want to hear as much of the room ambience as might be recorded with an omnidirectional or cardioid pick-up pattern.

According to the book Recording The Beatles, the U48 was one of George Martin's favorite microphones when actually "recording The Beatles." Utilizing the same M7 capsule, BV8 output transformer and VF14K vacuum tube as TELEFUNKEN's historic reissue of the U47, the U48s authoritative mid-range and extended low-end response make the microphone an excellent tool for recording vocals and acoustic instruments, both near and far.

A microphone's capsule is often made of two sides. The front diaphragm will produce a cardioid response, as will the rear. When the two diaphragms are polarized in the same polarity, an "omnidirectional" effect is achieved. When they are polarized in opposite polarity a bidirectional or figure 8 pattern is created. This is not an acoustic pattern creation; it is an electronic pattern creation. All microphone capsules are omnidirectional in the low frequency regions of their response. As you climb the frequency spectrum the capsule will have a more directional response. When you have two identical diaphragms with identical voltage to those diaphragms you will have a smooth "omnidirectional" response. When those voltages are reversed, an electronic cancellation of common information is achieved; the result is two "lobes," one on the front of the microphone and one on the rear of the microphone, with full frequency cancellation through the frequency range achieved through electronic cancellation. While the capsule head assembly from a U47 can be fitted to a U48 amplifier, the same does not work in reverse.

Please fill out the form below and a Vintage King Audio Consultant will contact you with a ship date for the Telefunken Elektroakustik U47/U48 Tube Condenser Mic Stereo Set.

Have a better price in mind for the Telefunken Elektroakustik U47/U48 Tube Condenser Mic Stereo Set that you've been checking out? We're willing to work on it!Please fill out the form below with your contact information.Once the form is submitted, a Vintage King Audio Consultant will contact you as soon as possible with our best price on this product.