$ 8,995 .00
Your Savings: $ 1,349 .25 Msrp: $ 10,344 .25
or $375/month for 24 months 0% interest for 24 months. 24 equal monthly payments required. Learn more
Ships directly from Telefunken Elektroakustik
Note: This item may not be returnable or could require a restocking fee. Contact one of our Audio Consultants for more details. This item ships directly to you from the manufacturer. To ensure that the manufacturer currently has stock, please chat, call or email for the latest availability status. 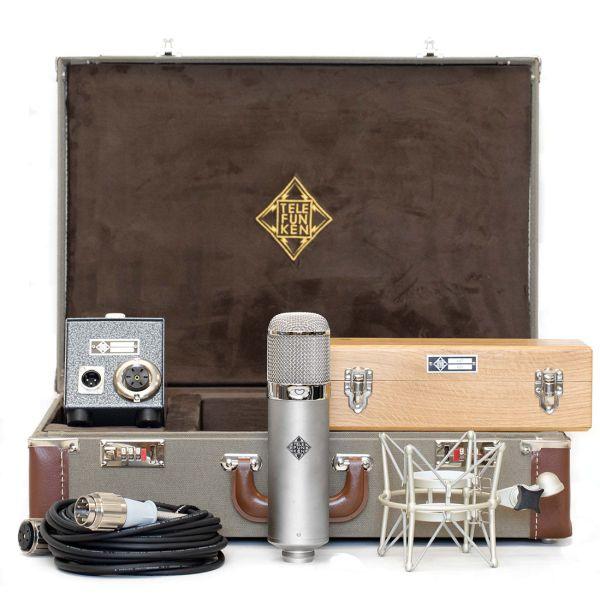 TELEFUNKEN gave an already versatile microphone even more flexibility when the company launched the U48 large diaphragm tube microphone in the late 1950s, a decade after the manufacturer introduced its groundbreaking U47. Featuring the exact same vacuum tube, output transformer and capsule as the U47, the TELEFUNKEN Elektroakustik U48 added a third polar pattern option, “bidirectional” figure-8, that gave recording engineers even more control over room ambience and instrument bleed than the omnidirectional and cardioid pickup responses.

TELEFUNKEN Elektroakustik has had to go the extra mile to recreate the classic U47, the first condenser microphone to offer a choice of pickup patterns, and the U48. The military surplus VF14M vacuum tubes used in the original U47 amplifier are now hard to find and, as a result, are very expensive, so TELEFUNKEN Elektroakustik has specially developed a plug-and-play replacement, the VF14K. The BV8 output transformer used in those original microphones has also been reengineered, using modern materials and manufacturing methods. Like the U47, the U48 featured Georg Neumann’s famous M7 capsule, developed in the late 1920s and used in various early microphone models, and that too has been reengineered for the company’s modern recreation of another timeless classic.

The sweetness and high-end detail delivered by the combination of components in the TELEFUNKEN U47 were a revelation to many audiences in the late 1940s who were more accustomed to the darker, less transparent sound of that era’s standard ribbon mics. The U48 took the well-defined mid-range and extended low-end response of the U47 a step farther, adding the ability to focus on the source and null out unwanted ambience using the figure-8 polar pattern.

The sonic character and versatility of the U48 earned it high regard from engineers and producers, who considered it an ideal tool for tracking vocals and acoustic instruments. Indeed, according to historical accounts, the TELEFUNKEN U48 was George Martin’s favorite microphone to use on numerous recording sessions with the Beatles at Abbey Road Studios.

ACCURATE IN EVERY DETAIL

The U48’s newly manufactured M7 capsule is contained in a large, chrome head grille while the matte nickel finished body houses a new BV8 output transformer and the newly developed VF14K vacuum tube. Completing TELEFUNKEN Elektroakustik’s accurate recreation of the U48 is the classic diamond logo on the front of the body tube.

Please fill out the form below and a Vintage King Audio Consultant will contact you with a ship date for the Telefunken Elektroakustik U48 Tube Condenser Microphone.

Have a better price in mind for the Telefunken Elektroakustik U48 Tube Condenser Microphone that you've been checking out? We're willing to work on it!Please fill out the form below with your contact information.Once the form is submitted, a Vintage King Audio Consultant will contact you as soon as possible with our best price on this product.