$ 4,295 .00
Your Savings: $ 644 .25 Msrp: $ 4,939 .25
or $179/month for 24 months 0% interest for 24 months. 24 equal monthly payments required. Learn more
Ships directly from Telefunken Elektroakustik
Note: This item may not be returnable or could require a restocking fee. Contact one of our Audio Consultants for more details. This item ships directly to you from the manufacturer. To ensure that the manufacturer currently has stock, please chat, call or email for the latest availability status. 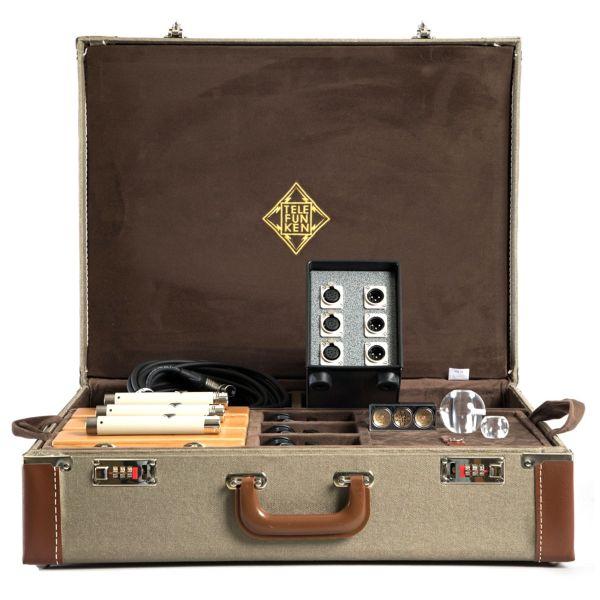 Engineers who recorded classical music for Decca Records pioneered the Decca Tree microphone placement technique in the early 1950s when they wanted a strong sense of stereo image and balanced coverage of an orchestra, as the conductor might have heard while he led the orchestra.

In addition to orchestral recording applications, the Decca Tree configuration can be an invaluable component to more contemporary recordings for drum applications and to gain an overall "band in a room" kind of atmosphere to your recording process.

The most common Decca Tree setup employs three 1-meter bars from which the microphones hang in a triangle configuration; though larger and smaller bar sets can be used.

One of the problems often associated with the Decca Tree technique is a loss of high frequency content due to the physics of how sound travels. The capsule assembly of the Neumann M-50 featured a 40mm acrylic sphere which was actually a "diffuse field sphere" built into the M-50's capsule assembly. In order to obtain a best of both worlds scenario, TELEFUNKEN Elektroakustik has created diffuse field spheres as an accessory for the ELA M 260 Tri-Mono Recording Set.

Please fill out the form below and a Vintage King Audio Consultant will contact you with a ship date for the Telefunken ELA M 260 Tube Condenser Microphone Tri-Mono Set.

Have a better price in mind for the Telefunken ELA M 260 Tube Condenser Microphone Tri-Mono Set that you've been checking out? We're willing to work on it!Please fill out the form below with your contact information.Once the form is submitted, a Vintage King Audio Consultant will contact you as soon as possible with our best price on this product.