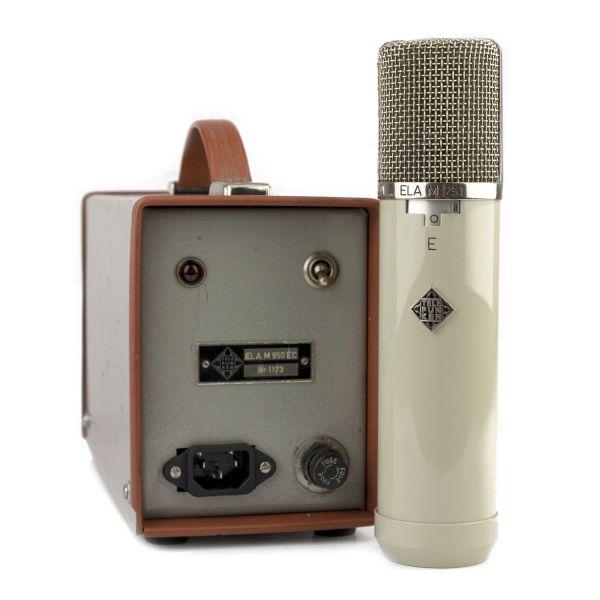 The Telefunken ELA M 251 microphone came about when Neumann ended its contract with Telefunken to distribute its microphones. Looking for a replacement for the large-diaphragm U47 in this market, Telefunken contracted with AKG in 1958 to develop the ELA M 251 and ELA M 250 microphones, using the same elements that made the C12 microphone so desirable: a Haufe T-14/1 transformer, a 6072 tube, and a CK12 capsule. The 251 model has three polar patterns, while the 250 model has Omni and Cardioid only.

The letter 'E' was added to models marketed for 'Export', which included a socketed 6072 tube (since it was easier to obtain outside Europe). The non-'E' version of the mics used an AC701K tube, which was designed to work with the electrical standards set for the Austrian and German broadcast systems of the era.

In most respects, (other than wiring for the different tubes), the 'E' and 'non-E' models are identical. But neither is identical to the C12, which had a remote pattern selector box, whereas the ELA-M 250/251 has the selector switch right on the body of the mic, just like the Neumann U47. Also, the CK12 capsule in the C12 mic was wired differently than the ELA-M mic. On the 251 mics, the two halves of the backplate of the CK12 dual-diaphragm were isolated from each other, allowing the electrical switching between three polar patterns, instead of the two found on the C12 microphone. The additional polar pattern, combined with a different, thicker mesh grill, contributed to the different sonic characteristics of the Telefunken version compared to the original C12.

The ELA-M has become a Holy Grail microphone due to its incredible tone and has been used on countless great recordings of the last 50+ years. Imitation is the sincerest form of flattery, and the ELA M 251 is one of the two or three most-copied microphones in history.

Click here to learn more about the history of the Telefunken ELA M 250 and 251 Tube Microphones.

Please fill out the form below and a Vintage King Audio Consultant will contact you with a ship date for the Telefunken ELA-M 251 E Tube Microphone #1112 (Vintage).

Have a better price in mind for the Telefunken ELA-M 251 E Tube Microphone #1112 (Vintage) that you've been checking out? We're willing to work on it!Please fill out the form below with your contact information.Once the form is submitted, a Vintage King Audio Consultant will contact you as soon as possible with our best price on this product.