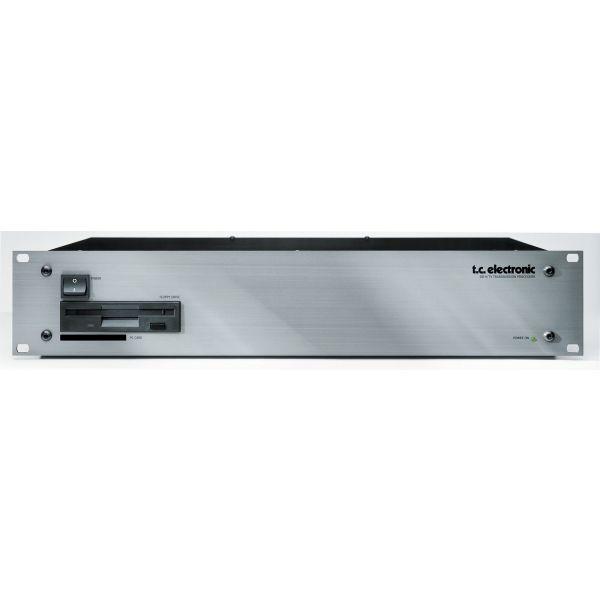 Consistency in loudness is the single most important audio issue to get right in broadcast. That is the reason why DB-8, around the world, is the most widely used digital transmission processor today. It has set a new standard for real-time loudness control and format conversion, and pioneered support of both analog and digital feeds from one and the same machine.

Both the TC Electronic DB-4 and DB-8 employ cutting edge technology to enable stations get rid of listener complaints about jumping levels, and to transmit in analog and digital with optimum processing for both feeds. DB-4 includes the same processing and I/O capabilities as DB-8, except for holding two separate processors, instead of the four inside DB-8. For example, one DB-4 can apply different processing to four mono, two stereo or two 5.1signals, or to a combination such as one stereo and one 5.1 signal.

DB-4 and Your Broadcast Environment
On the audio side, DB-4 gets the most out of any data reduction system your station or country has chosen, be it MPEG4, Dolby AC3, MP3, AAC, DTS etc. At the station, it can route and delay Dolby E encoded signals, so the same signal-path can be used partly for linear stereo, partly for data-reduced audio.

On the control side, DB-4 interfaces directly with standard master control applications. Changes are applied using serial control, GPI or ethernet, and multiple units can be monitored via SNMP trapping. Local or remotely located DB-4 and DB-8 units can also be controlled from the Icon program included with the machine. (Icon runs under Windows 2k, XP and NT, Mac OS9 and OSX).

Identify Your Opportunities
If your station is an early mover in digital, and seeking to identify advantages, DB-8 and DB-4 will provide you with all the possibilities you need to transmit in 5.1 now, as well as to experiment and find the right competitive angle for the future. These processors can easily adapt to your audience's changing needs.

Technical Integrity
Synchronous 48kHz sampling and 48 bit processing throughout, in combination with massive jitter rejection, ensures high audio resolution and perfect timing, even when long, digital transmission lines are used to feed a processor. The DB-8/DB-4 platform is without compromises. In fact, hundreds of machines can be cascaded without degrading the transmitted sound. If optional analog interfacing cards are added, they too represent state of the art technology with 96kHz sampling and mastering quality dynamic range, far exceeding any US, Japanese or EU broadcast standard.

Foundation
TC's involvement with high quality digital audio dates back to the mid eighties with pre-DSD technology being employed in the still ubiquitous delay, 2290. TC's commitment to digital excellence continued over the years with equipment for the music, film and mastering industries. The multichannel processing in DB-8 and DB-4, for instance, was originally developed for film. Those tools have been adjusted for broadcast use and are now part of your arsenal. Or dynamics control, where some of the latest end-listener distortion canceling methods originally invented for mastering have been build in. Ten years experience with analog and digital broadcast combined with the know-how of skilled engineers is the strong base of the DB-8/DB-4 platform. From the purist and quality conscious hardware engineers to software writers of whom some were involved with designing the MPEG codecs, the team forms a competent, non-dogmatic design group ready to take broadcast audio to the next level.

Please fill out the form below and a Vintage King Audio Consultant will contact you with a ship date for the TC Electronic DB-4 SDI.

Have a better price in mind for the TC Electronic DB-4 SDI that you've been checking out? We're willing to work on it!Please fill out the form below with your contact information.Once the form is submitted, a Vintage King Audio Consultant will contact you as soon as possible with our best price on this product.