$ 925 .00
No interest if paid in full within 12 months Learn more
Ships directly from Studio Technologies
Note: This item may not be returnable or could require a restocking fee. Contact one of our Audio Consultants for more details. This item ships directly to you from the manufacturer. To ensure that the manufacturer currently has stock, please chat, call or email for the latest availability status. 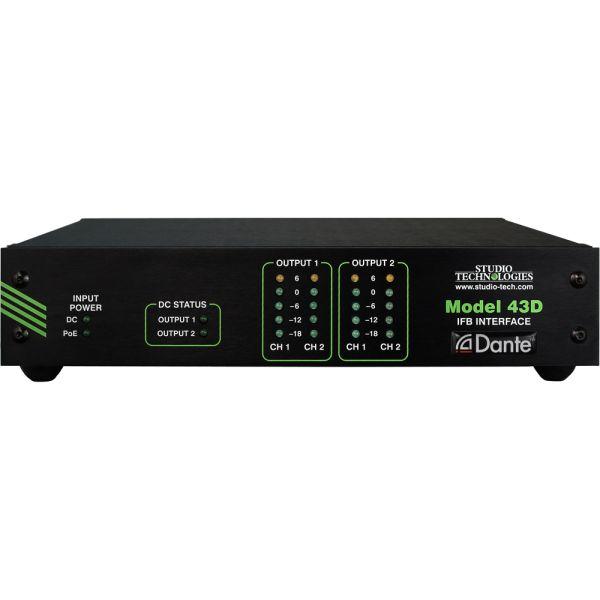 The Studio Technologies Model 43D IFB Interface provides broadcast-standard powered and non-powered analog audio IFB outputs from audio signals that are being transported using the Dante audio-over-Ethernet media networking technology. IFB, also known as "interruptible foldback" or talent cueing, is a method commonly used for on-air talent and related personnel to receive one-way (listen-only) audio signals associated with live-event broadcasts. Especially important in sports and entertainment events, IFB plays a crucial role in virtually all broadcast applications that require people to stay "in the know." Dante has found wide acceptance as an audio "backbone" due to its ease of use, high performance, strong interoperability, and wide adoption by a large number of equipment manufacturers. The Model 43D is a specialized "tool" that helps to extend Dante's capabilities into the important but specialized world of broadcast and production IFB.

Dante audio-over-Ethernet technology is used to transport the four audio channels that are associated with two, 2-channel IFB outputs from their source to the Model 43D. Each of the Model 43D's two powered IFB outputs supply operating power and two audio channels to groups of listen-only user devices. Two line-level analog outputs are also provided for general-purpose use. The Model 43D is compatible with the latest broadcast and audio equipment that uses Dante technology. An Ethernet connection is all that's required to make the Model 43D part of a sophisticated, networked audio system.

A Model 43D utilizes four digital audio input channels typically provided by Dante-enabled devices such as matrix intercom systems, DSP processors, broadcast routers, and audio consoles. The powered IFB outputs allow direct connection with listen-only user beltpacks such as the popular Model 32A from Studio Technologies. The line-level IFB outputs are provided for connection with a variety of devices that use analog interfacing. Careful attention to circuit design and component selection ensures that excellent audio quality is maintained. Audio level meters provide confirmation of system performance during setup and operation. The Model 43D can be powered by Power-over-Ethernet (PoE) or an external source of 12 volts DC.

Standard connectors are used for the powered IFB outputs, line-level IFB outputs, Ethernet, and DC power interconnections. The Model 43D's enclosure has a "1/2-rack" 1U form factor and weighs less than two pounds, making it well suited for use in portable applications. Alternately, using one of the optional rack-mount front panels, one or two Model 43D units can be mounted in a single space (1U) of a standard 19-inch rack enclosure.

Please fill out the form below and a Vintage King Audio Consultant will contact you with a ship date for the Studio Technologies Model 43D IFB Interface.

Have a better price in mind for the Studio Technologies Model 43D IFB Interface that you've been checking out? We're willing to work on it!Please fill out the form below with your contact information.Once the form is submitted, a Vintage King Audio Consultant will contact you as soon as possible with our best price on this product.

VIEW
139789
I would like to thank VK for the wonderful sales assistance, service and prices. This was my first purchase with you and it won't be my last. I only wish I'd discovered you years ago!
Matthew R.
I had two Grammy wins this year - Ray LaMontagne & Carolina Chocolate Drops. Both made with help from Vintage King!
Ryan F.
In almost 20 years in Pro audio buying, never did I receive a unit so well packed and exactly as described. Works flawlessly. The whole process has been so smooth. I will never hesitate to do business with you guys in the future and will recommend you to everyone I know.
Martin C.
This was my first experience buying something from Vintage King (although I surf the "used" categories on the website frequently!), and, despite being on the other side of the world, I had absolutely no trouble and everything went very smoothly.
Phil T.
The speed of delivery exceeded my expectations! I was VERY pleased that my shipment arrived in time for a scheduled vocal tracking session. The packing insured that my order arrived safely. And the sales staff responded quickly to questions regarding the product.
James P.
Thank you so much! Vintage King has been so fair and easy to work with. I can't thank you enough. It feels good to trust such a hefty purchase to folks who are so helpful and knowledgeable. Vintage King is a sound designers dream store.
Noa L.
You guys have excellent customer service and I am excited about the next upgrade I complete on my fifth recording facility. I've been in the studio business for forty plus years. The salesman I worked with at Vintage King was the best of the best. You all rock!
Robby T.
I would recommend Vintage King to any one looking for top-class gear, unbeatable customer service and the best prices on the map!
Jake D.
My experience with Vintage King was excellent. The order was here fast considering it was out of stock. The sales person had SKB send it to me directly and I couldn't have been more pleased.
Michael D.
From the minute I placed my order I was kept well-informed through each step in your process. Even though I was buying a comparatively modest piece of gear, your attention to detail made me feel like I was purchasing a six-figure mixing desk.
Thomas W.
I am a new customer of yours. You guys provided me the absolute best deals in ordering all the equipment to power my brand new recording studio. Your customer service is amazing and i will always deal with you from here on out.
Rob M.
Thanks for your great service and getting this out today. You guys really are the Kings!
Alan B.
Better than expected! Truly impeccable service. Your team was professional, knowledgeable, provided speedy delivery above and beyond standard. Vintage King Audio is definitely my go to for all of my audio and information needs.
James O.