$ 472 .00
Your Savings: $ 227 .99 Msrp: $ 699 .99
No interest if paid in full within 12 months Learn more
In Stock - Fastest eDelivery 24/7!
This product is delivered by download. Once your order is complete, you will receive a license code via email within minutes. Note: Software is not returnable, so please call if you need advice about compatibility or version.

High-end mastering plug-in and editing for digital distribution, CD, Vinyl and more
MFR# 1176-188
Shop All Steinberg
Skip to the end of the images gallery 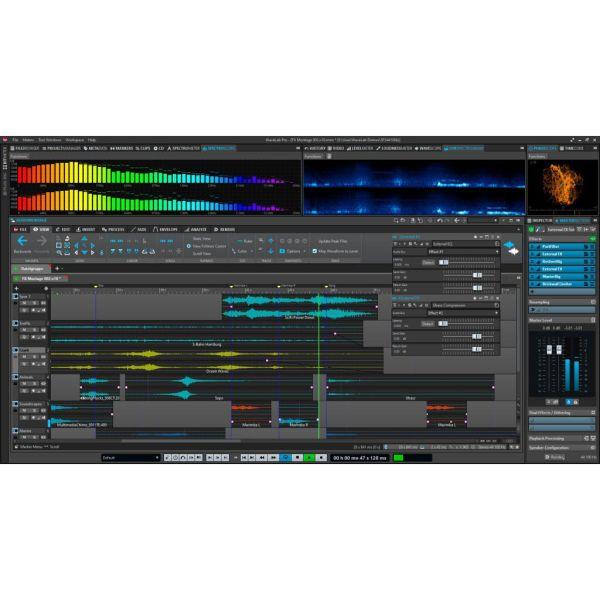 WaveLab is much more than the master of mastering. Its modular approach allows you to use different parts of its comprehensive feature set in every area of professional audio production. Whether it’s sample-accurate editing, precise spectral changes, audio restoration, forensic analysis of sound files and many other uses, WaveLab has the tools to do the job incredibly accurately and intuitively. Used by many musicians, radio journalists and podcasters, Steinberg WaveLab 10 Pro offers a comprehensive feature set that meets all demands of mixing and mastering studios, post-production facilities, sound designers, musicians, journalists, broadcasters and other audio creatives.

WaveLab 10 offers several tools and enhancements that are exclusive to the Pro edition, such as allowing users to integrate external effect devices into the signal flow by providing more flexible ways to integrate external hardware effects. New to WaveLab Pro is also Reference Track for adding a reference audio file and then toggling between the reference audio file and other tracks. WaveLab Pro now also opens up to other audio editors, providing users the option to access and modify audio with other editors like SpectraLayers from within WaveLab. Highlights of Audio Montage include the support of multitrack recording and non-destructive inline editing. WaveLab Pro 10 also records and renders live input streams through the Master Section and the inserted plug-in chain.

Both Pro and Elements versions now offer video playback support, letting users arrange, edit and process the audio of video within Audio Montage. The Audio Editor now includes undo/redo edit history in order for users to move from one edit to the next and recover previous versions of edited part without losing the changes made to the rest of the audio. The former Effect Tool Windows has been redesigned and renamed the Montage Inspector, making it easier to use. The track list in the Audio Montage has also witnessed an overhaul, with several improvements to the user interface. Due to the enhanced audio I/O routing provided in WaveLab 10, the audio connections settings dialog has also been renewed.

Please fill out the form below and a Vintage King Audio Consultant will contact you with a ship date for the Steinberg WaveLab Pro 10 - Electronic Delivery.

Have a better price in mind for the Steinberg WaveLab Pro 10 - Electronic Delivery that you've been checking out? We're willing to work on it!Please fill out the form below with your contact information.Once the form is submitted, a Vintage King Audio Consultant will contact you as soon as possible with our best price on this product.

VIEW
129082
I would like to thank VK for the wonderful sales assistance, service and prices. This was my first purchase with you and it won't be my last. I only wish I'd discovered you years ago!
Matthew R.
I had two Grammy wins this year - Ray LaMontagne & Carolina Chocolate Drops. Both made with help from Vintage King!
Ryan F.
In almost 20 years in Pro audio buying, never did I receive a unit so well packed and exactly as described. Works flawlessly. The whole process has been so smooth. I will never hesitate to do business with you guys in the future and will recommend you to everyone I know.
Martin C.
This was my first experience buying something from Vintage King (although I surf the "used" categories on the website frequently!), and, despite being on the other side of the world, I had absolutely no trouble and everything went very smoothly.
Phil T.
The speed of delivery exceeded my expectations! I was VERY pleased that my shipment arrived in time for a scheduled vocal tracking session. The packing insured that my order arrived safely. And the sales staff responded quickly to questions regarding the product.
James P.
Thank you so much! Vintage King has been so fair and easy to work with. I can't thank you enough. It feels good to trust such a hefty purchase to folks who are so helpful and knowledgeable. Vintage King is a sound designers dream store.
Noa L.
You guys have excellent customer service and I am excited about the next upgrade I complete on my fifth recording facility. I've been in the studio business for forty plus years. The salesman I worked with at Vintage King was the best of the best. You all rock!
Robby T.
I would recommend Vintage King to any one looking for top-class gear, unbeatable customer service and the best prices on the map!
Jake D.
My experience with Vintage King was excellent. The order was here fast considering it was out of stock. The sales person had SKB send it to me directly and I couldn't have been more pleased.
Michael D.
From the minute I placed my order I was kept well-informed through each step in your process. Even though I was buying a comparatively modest piece of gear, your attention to detail made me feel like I was purchasing a six-figure mixing desk.
Thomas W.
I am a new customer of yours. You guys provided me the absolute best deals in ordering all the equipment to power my brand new recording studio. Your customer service is amazing and i will always deal with you from here on out.
Rob M.
Thanks for your great service and getting this out today. You guys really are the Kings!
Alan B.
Better than expected! Truly impeccable service. Your team was professional, knowledgeable, provided speedy delivery above and beyond standard. Vintage King Audio is definitely my go to for all of my audio and information needs.
James O.