$ 79 .99
Your Savings: $ 20 .00 Msrp: $ 99 .99
No interest if paid in full within 12 months Learn more
In Stock - Fastest eDelivery 24/7!
This product is delivered by download. Once your order is complete, you will receive a license code via email within minutes. Note: Software is not returnable, so please call if you need advice about compatibility or version.

Premium VST drum library capturing Simon Phillips’ concept of drum sound that is based on 40 years of experience - includes 14 original Simon Phillips styles for rock, fusion, pop and blues
MFR# 1176-42
Shop All Steinberg
Skip to the end of the images gallery 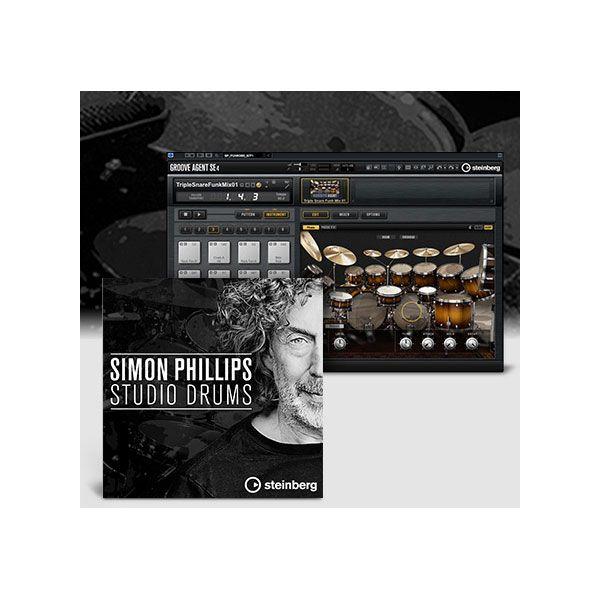 Hall-of-fame drummer Simon Phillips recorded and mixed his signature studio drum set exclusively for Groove Agent at his Phantom Recordings Studio in Los Angeles, California. Steinberg Simon Phillips Studio Drums is a premium VST drum library captures Phillips’ concept of drum sound that is based on 40 years of experience in playing, recording and mixing music with some of the most talented artists in music history such as Frank Zappa, Mick Jagger and Jeff Beck.

Simon Phillips’ established recording techniques and his one-of-a-kind playing style emerge in the studio drum kit that comes with over 27 kit pieces, including two kick drums, six snares, eight toms and four octobans, over 6 GB of samples and 14 groove Styles — played and recorded one-by-one by the legend himself.

Expand your Groove Agent library with Simon Phillips Studio Drums and get the sound and feel of one of the most esteemed and accomplished drummers, artists and studio engineers worldwide.

Simon Phillips has developed his very own concept of playing, recording and mixing drums in over 40 years as a professional. This not only provided him with the expected experience as a drummer but also turned him into an expert studio engineer while learning and adapting many of his recording techniques from the hundreds of industry legend engineers and musicians with whom he shared the studio. Combining the technical savvy that he gained over the years with his passion and incomparable understanding of drums has earned Simon Phillips and his studio both recognition and an international reputation.

For the studio drums in Groove Agent 4 Simon recorded his customized drum set in his very own Phantom Recordings Studios in Los Angeles with the same setup, microphones and techniques (such as the signature paint can in the kick drum) that he would use for regular recording sessions. His drum set includes double kick drums, a set of three snare drums, eight toms including a massive gong drum and a 14" x 18" floor tom, a set of four octabans, six cymbals and hihat. The main snare drum can be played with or without wire, and an alternate metal snare is available for exchange.

To get the typical Simon Phillips sound, two additional options have been added to the feature set of the Acoustic Agent in Groove Agent. The pitch of the room and the overhead microphone channels can be adjusted for each instrument group, like kick, snare, toms and octobans, in order to achieve powerful deep kick drums and shattering snares. Secondly, 32 additional trigger samples for the kick and snare each can be mixed to the acoustic signal to create extraordinary drum sounds for fusion, electronic and funk projects. Simon’s long-time friend and business partner, Chris Marr, produced, recorded, mixed and edited the Simon Phillips Studio Drums in collaboration with Steinberg.

When it comes to drum playing, Simon Phillips is known for his uncompromising precision, expressive intensity and unmistakable groove that earned him a place in the Modern Drummer Hall Of Fame. Technically on the highest level his grooves never lack emotion and feeling and prove his reputation as a creative drummer in every way.

Simon Phillips Studio Drums comes with 14 Styles exclusively recorded for this VST Sound Instrument Set. With the composer perspective in mind Simon chose his grooves in order to provide a set of songwriter Styles to be used as a source of inspiration, playalongs or a starting point for new projects. The grooves range from classic rock styles, funk and fusion to slow ballads, reggae and 6/8 blues rock.

All Styles can be varied in complexity and intensity in the Style Player of Groove Agent and include several intros, fills and endings for each Style to create complete drum tracks in next to no time. Giving you the bonus treatment Simon recorded an unheard-of drum solo that can be loaded full length as MIDI file into your project.

Simon Phillips is by far one of the world’s most renowned and respected drummers, whose style not only reflects his technical gift but also his distinct musical sensibility. Whether it is rock, fusion or jazz, Simon applies the same precision and intensity to his drumming, which is never lacking in emotion and feel.

Mostly known for being a member of Toto and his solo project Protocol, he has toured and recorded to date with many bands and artists, including Mick Jagger, The Who, Jeff Beck, Jack Bruce, Peter Gabriel, Joe Satriani, Tears for Fears, Judas Priest, Roxy Music, Michael Schenker, Nik Kershaw, Phd., Al DiMeola, 801, Pete Townshend, Russ Ballard, Robert Palmer, Stanley Clarke, The Pretenders, Jon Anderson, Whitesnake and Dave Gilmour... to name but a few.

Yet another expansion to Simon’s musical career is producing and engineering for artists like Mike Oldfield, Derek Sherinian, formally of Dream Theater, and Planet X.

Simon’s sympathy to the various styles of music and his interest in sound and arrangements will always drive him to expand his career.

Please fill out the form below and a Vintage King Audio Consultant will contact you with a ship date for the Steinberg Simon Phillips Studio Drums - Electronic Delivery.

Have a better price in mind for the Steinberg Simon Phillips Studio Drums - Electronic Delivery that you've been checking out? We're willing to work on it!Please fill out the form below with your contact information.Once the form is submitted, a Vintage King Audio Consultant will contact you as soon as possible with our best price on this product.