Professional solution for audio, live and post production in the film, television and media industry
MFR# 45794
Shop All Steinberg
Skip to the end of the images gallery 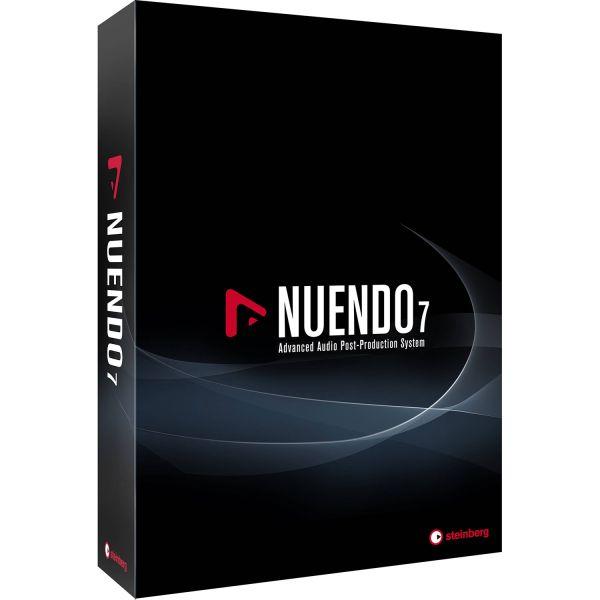 The Steinberg Nuendo 7 leads innovation in every aspect of audio-to-picture work. Providing unique features for game audio production, TV and film post-production workflows, Nuendo 7 provides more dedicated capabilities for these industries than any other audio software, ranging from integration with game middleware over re-conforming through to automatic dialog recording (ADR).

Instead of saving audio assets piece-by-piece on the hard-drive and importing them laboriously into Wwise later, Nuendo 7 saves you hours of work: Simply drag-and-drop audio files including customized naming conventions such as project name, folder path and track name via Game Audio Connect towards Wwise, avoiding time-consuming minutiae of manually configuring the import and export dialogs.

Recall a Nuendo project from within Wwise

Save valuable production time even when going back from an audio asset in Wwise to the respective Nuendo project by simply recalling the original Nuendo project from that audio file.

Last but not least, Game Audio Connect also provides a seamless integration with Perforce: any change in the Nuendo 7 project is automatically monitored in the background, making manual interactions unnecessary.

ReConforming for film and TV post-production

Film and TV editors will be all too familiar with this scenario: A project and all its audio files perfectly matches the picture, but suddenly a re-cut version arrives from the video editor. The re-conforming algorithm detects picture changes on the basis of EDL comparisons (previous and new EDL lists). This generates a change list used to perform the re-conform process. Before the process starts, Nuendo 7 provides a preview of the expected result. Several options are available for the re-conforming process, including handling of gaps, a choice of different matching algorithms as well as several processing and marker placement options.

The new render-in-place feature allows you to quickly bounce a user-defined selection of multiple MIDI and/or audio parts for re-integration into your Nuendo project.

The Render Export feature exports a freely selectable section of audio and MIDI files to a hard drive, either as separate events, as block events or as one file. You can define exactly what the rendering process should take into account and what is ignored; this could, say, be just the file without any effects, it could include all channel settings or even the entire signal path. In addition, the powerful naming scheme option lets you determine how the rendered audio files are named.

The new “Import audio tracks from project” function (often also referred to as „Import Session Data“) makes it easy to transfer audio tracks including all audio events and related track data from one Nuendo project to another, without needing to even open the source project. And of course, all relevant data including plug-ins, routing and automation data are transferred, too.

Nuendo 7 comes with a new windows handling system including a new workspace organizer for a more efficient workflow. Windows can be freely placed on any display and maximized, restored, minimized, tiled and cycled through by using standard Windows OS commands.

MediaBay and the VST Instrument Rack can now be displayed to the right side of the Project window. The result is the new Rack Zone with improved efficiency, giving you more time to focus on your creative flow and reducing the number of open windows you need to manage. Track List and Inspector

The channel strip EQ module provides additional mouse-over value readouts for gain, frequency and the equivalent in note pitch. Enter pitch notes or cent values instead of Hz frequencies for each band. The Pre section now offers selectable slopes of 6, 12 (default), 24, 36 and 48 for high-cut and low-cut.

The Multiband Envelope Shaper assists you in bringing out the best in drum mixes, foley and creative sound (re-) shaping tasks. This new plug-in splits the incoming audio material into a maximum of four frequency bands and allows you to freely alter the attack and release characteristic of each band to rework the transient structure.

A legend returns! Quadrafuzz v2 allows you to distort up to four bands individually, while maintaining full control over harmonic distortion and some fairly nifty band-based delay effects. Letting you dial in anything from a dark, fat fuzz with huge amounts of bit-crushing distortion and delay, to a bright, almost acoustic-sounding warm crunch, Quadrafuzz v2 is your go-to distortion unit for just about any instrument or sound.

Previously only available with the Nuendo Expansion Kit (NEK), Padshop is now part of the Nuendo plug-in set. Padshop boasts granular synthesis at its finest to create fantastic-sounding spheres and beautifully evolving textures. This spectacular synth is designed to add the flavor of the future to your tracks.

DeEsser is now available as a channel strip module and adds full side-chain support, allowing you to constrain the high and low frequencies. It also offers a very useful preview function that plays only the signal that gets removed.

Multiband Compressor now supports dedicated side-chaining with the ability to adjust and monitor trigger frequencies individually for each of its four bands.

The updated Tuner plug-in now features strobe tuning mode, a customizable base frequency and a bigger display for better readability.

Nuendo 7 introduces 50fps timecode support as well as a new timecode entry scheme within the transport bar. Furthermore, metadata of audio events is now not only displayed in the info line, but also shown in the event itself. In addition, the option “Automation follows events” now applies for trimming head/tail of events, making editing a lot easier, as automation curves will be written even if the audio event is shortened or extended.

ASIO-Guard 2 uses low latencies only on the tracks where latency matters while using a larger latency that saves performance for playback tracks. It now supports instrument tracks including multi-timbral and sample instruments that feature disk streaming as well as all live-input independent channels.

The new MIDI tempo detection allows you to jam along onto a MIDI track without rigidly following the metronome. Even though your recording is entirely out of sync with the grid and tempo track, the new tempo detect function will reconstruct any tempo change in your performance and align it to the grid for further editing.

The new Nuendo plug-in manager lets you arrange, sort and group your effects and instruments either at the top level or in custom submenus, making finding your plug-ins easier and letting you focus on what’s really important.

VST Connect SE allows you to record audio and MIDI data over the internet. To make VST Connect SE even better, it now sports a redesigned graphic user interface and is fully integrated into Nuendo’s control room cue send system.

Please fill out the form below and a Vintage King Audio Consultant will contact you with a ship date for the Steinberg Nuendo 7.

Have a better price in mind for the Steinberg Nuendo 7 that you've been checking out? We're willing to work on it!Please fill out the form below with your contact information.Once the form is submitted, a Vintage King Audio Consultant will contact you as soon as possible with our best price on this product.

VIEW
48507
I would like to thank VK for the wonderful sales assistance, service and prices. This was my first purchase with you and it won't be my last. I only wish I'd discovered you years ago!
Matthew R.
I had two Grammy wins this year - Ray LaMontagne & Carolina Chocolate Drops. Both made with help from Vintage King!
Ryan F.
In almost 20 years in Pro audio buying, never did I receive a unit so well packed and exactly as described. Works flawlessly. The whole process has been so smooth. I will never hesitate to do business with you guys in the future and will recommend you to everyone I know.
Martin C.
This was my first experience buying something from Vintage King (although I surf the "used" categories on the website frequently!), and, despite being on the other side of the world, I had absolutely no trouble and everything went very smoothly.
Phil T.
The speed of delivery exceeded my expectations! I was VERY pleased that my shipment arrived in time for a scheduled vocal tracking session. The packing insured that my order arrived safely. And the sales staff responded quickly to questions regarding the product.
James P.
Thank you so much! Vintage King has been so fair and easy to work with. I can't thank you enough. It feels good to trust such a hefty purchase to folks who are so helpful and knowledgeable. Vintage King is a sound designers dream store.
Noa L.
You guys have excellent customer service and I am excited about the next upgrade I complete on my fifth recording facility. I've been in the studio business for forty plus years. The salesman I worked with at Vintage King was the best of the best. You all rock!
Robby T.
I would recommend Vintage King to any one looking for top-class gear, unbeatable customer service and the best prices on the map!
Jake D.
My experience with Vintage King was excellent. The order was here fast considering it was out of stock. The sales person had SKB send it to me directly and I couldn't have been more pleased.
Michael D.
From the minute I placed my order I was kept well-informed through each step in your process. Even though I was buying a comparatively modest piece of gear, your attention to detail made me feel like I was purchasing a six-figure mixing desk.
Thomas W.
I am a new customer of yours. You guys provided me the absolute best deals in ordering all the equipment to power my brand new recording studio. Your customer service is amazing and i will always deal with you from here on out.
Rob M.
Thanks for your great service and getting this out today. You guys really are the Kings!
Alan B.
Better than expected! Truly impeccable service. Your team was professional, knowledgeable, provided speedy delivery above and beyond standard. Vintage King Audio is definitely my go to for all of my audio and information needs.
James O.