$ 59 .99
Your Savings: $ 20 .00 Msrp: $ 79 .99
No interest if paid in full within 12 months Learn more
In Stock - Fastest eDelivery 24/7!
This product is delivered by download. Once your order is complete, you will receive a license code via email within minutes. Note: Software is not returnable, so please call if you need advice about compatibility or version. 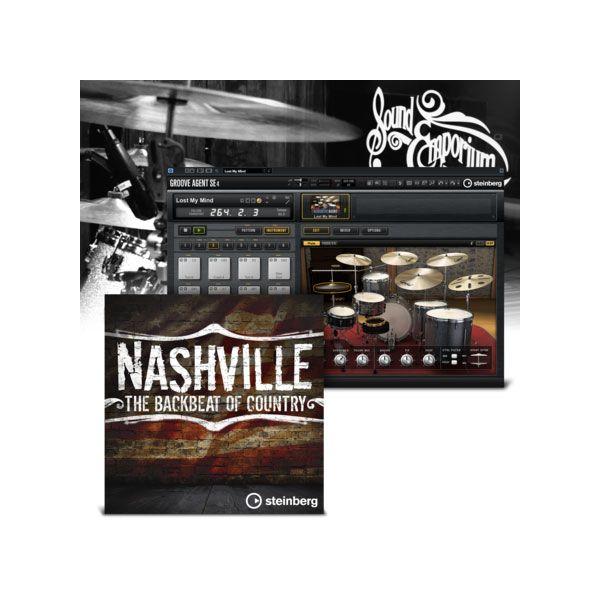 The Steinberg Nashville Drums VST Sound Instrument Set for Groove Agent brings you the sound and spirit of world-famous Music City, USA, and puts it right into your productions.

Recorded by Grammy-award-winning sound engineer Chad Carlson at the legendary Sound Emporium Studios in Nashville, Tennessee, the drum kit comes with over 8,000 samples and hundreds of grooves that will instantly enhance your productions.

The top-notch recordings with 24 different microphone channels make it universal for all genres: from true organic country that purists long for to pop-flavored country rock. The remarkable room of the studio together with the striking microphone setup and outboard equipment make the sound of the drums stand out in every way.

The 21 Styles that were exclusively recorded for this set are blending rock and country and range from chugging ballads and soulful blue-eyed R&B with country flavor mixed into energetic country rock and radio-friendly contemporary country productions.

Get the authentic sound and groove of contemporary country music as it is produced today with Nashville drums — the backbeat of country.

In order to capture the sound of contemporary country, all drums were recorded in the Sound Emporium Studios in Nashville, Tennessee.

The Yamaha drum kit used for the recordings includes 13 kit pieces including two snares that can simultaneously be played and separately be mixed in the dedicated mixer of the Nashville kit. With up to 16 velocities and five round robins per instrument the drum kit sounds amazingly fresh and natural and feels so authentic as if you were actually sitting behind the mixing desk in Nashville.

Distinctive features are the multiple ambient microphones that have been used to cherish the fantastic sound of the room. With close room, far room and roof microphones, several options can be used to vary the sound of the drums extremely from direct and dry to airy and light and everything in between. The additional trash microphone lets you blend this special character to the mix that can make the big difference in the production. The single overly compressed ribbon microphone, just above the kick and below the toms, pointed at the drummer, can be individually blended into the channels of the kick, snares, hi-hat, and all the toms.

The following drum set was recorded for the drum library:

The Styles of Nashville include classic country rhythms, as well as ’90s and contemporary country grooves. All 20 Styles come with several intros and endings, main parts and fills and are produced for composers and songwriters in particular.

Complete drum tracks for traditional country songs with rock influences, pop country or just cool vibes with a classic-country twist can easily be put together with just a few clicks in your DAW of choice. All Styles feature the Style Player of Groove Agent that lets you instantly change the complexity and intensity of each groove.

Please fill out the form below and a Vintage King Audio Consultant will contact you with a ship date for the Steinberg Nashville Drums - Electronic Delivery.

Have a better price in mind for the Steinberg Nashville Drums - Electronic Delivery that you've been checking out? We're willing to work on it!Please fill out the form below with your contact information.Once the form is submitted, a Vintage King Audio Consultant will contact you as soon as possible with our best price on this product.

VIEW
104896
I would like to thank VK for the wonderful sales assistance, service and prices. This was my first purchase with you and it won't be my last. I only wish I'd discovered you years ago!
Matthew R.
I had two Grammy wins this year - Ray LaMontagne & Carolina Chocolate Drops. Both made with help from Vintage King!
Ryan F.
In almost 20 years in Pro audio buying, never did I receive a unit so well packed and exactly as described. Works flawlessly. The whole process has been so smooth. I will never hesitate to do business with you guys in the future and will recommend you to everyone I know.
Martin C.
This was my first experience buying something from Vintage King (although I surf the "used" categories on the website frequently!), and, despite being on the other side of the world, I had absolutely no trouble and everything went very smoothly.
Phil T.
The speed of delivery exceeded my expectations! I was VERY pleased that my shipment arrived in time for a scheduled vocal tracking session. The packing insured that my order arrived safely. And the sales staff responded quickly to questions regarding the product.
James P.
Thank you so much! Vintage King has been so fair and easy to work with. I can't thank you enough. It feels good to trust such a hefty purchase to folks who are so helpful and knowledgeable. Vintage King is a sound designers dream store.
Noa L.
You guys have excellent customer service and I am excited about the next upgrade I complete on my fifth recording facility. I've been in the studio business for forty plus years. The salesman I worked with at Vintage King was the best of the best. You all rock!
Robby T.
I would recommend Vintage King to any one looking for top-class gear, unbeatable customer service and the best prices on the map!
Jake D.
My experience with Vintage King was excellent. The order was here fast considering it was out of stock. The sales person had SKB send it to me directly and I couldn't have been more pleased.
Michael D.
From the minute I placed my order I was kept well-informed through each step in your process. Even though I was buying a comparatively modest piece of gear, your attention to detail made me feel like I was purchasing a six-figure mixing desk.
Thomas W.
I am a new customer of yours. You guys provided me the absolute best deals in ordering all the equipment to power my brand new recording studio. Your customer service is amazing and i will always deal with you from here on out.
Rob M.
Thanks for your great service and getting this out today. You guys really are the Kings!
Alan B.
Better than expected! Truly impeccable service. Your team was professional, knowledgeable, provided speedy delivery above and beyond standard. Vintage King Audio is definitely my go to for all of my audio and information needs.
James O.