Highlights From This Year's Show

$ 86,000 .00
or $1924/month for 60 months Based on 60 monthly payments of $1924 on approved credit (OAC). Learn more about leasing
Ships directly from SSL
Note: This item may not be returnable or could require a restocking fee. Contact one of our Audio Consultants for more details. This item ships directly to you from the manufacturer. To ensure that the manufacturer currently has stock, please chat, call or email for the latest availability status. 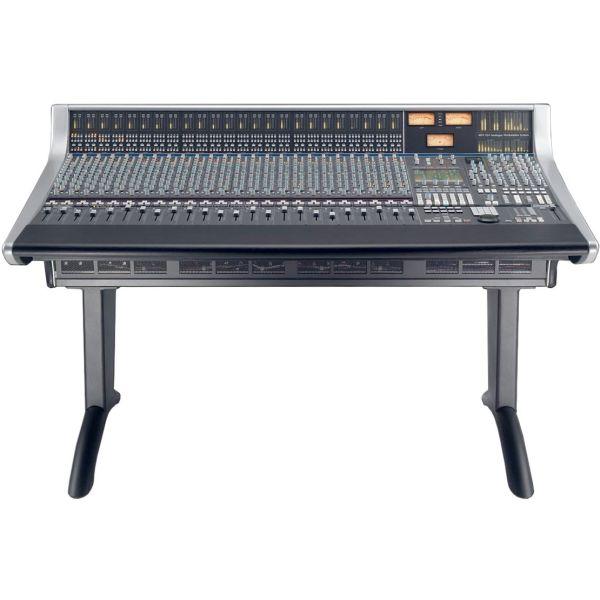 The Solid State Logic SSL AWS Recording Console reinvented the professional production console by combining classic SSL SuperAnalogue™ console technology with comprehensive DAW control hardware in a single work surface. The AWS is now used by leading international recording artists, producers and engineers and has shaped expectations for session workflow within today's and indeed tomorrows' production environments. The new console marks the introduction of delta-Control (d-Ctrl), a completely new analog console automation platform for SSL studio technology that unites the very best of automation in the analog console domain with DAW based workflow. All new AWS consoles will be delta models and console upgrades are available for all preceding models

The AWS is an SSL SuperAnalogue™ console, featuring the audio performance specifications that have established the benchmarks by which other manufacturers are measured. Exceptionally low THD, noise floor & crosstalk levels keep your audio absolutely pristine, while our legendary headroom carries every nuance of your audio and allows engineers to mix 'hotter' without distortion.

The Delta-Control is a unique new SSL console automation system unites the very best of automation in the analog console domain with DAW based workflow.

d-Ctrl is a native AAX/RTAS/VST/VST3 plug-in that allows automation of AWS as if it were a DAW Plug-in. The automation system in the DAW is used to record and playback control data from the faders and switches on the console as an alternative to using the SSL legacy automation system in the console. The d-Ctrl plug-in is inserted into a DAW mixer audio channel. The plug-in then receives and sends control data from an assigned AWS channel, VCA or Master fader via a high speed Ethernet Network connection. Audio on the DAW track passes through the plug-in slot unprocessed so the plug-in can be combined with other DAW plug-ins. The console Fader, mutes and relevant switches are represented as plug-in parameters in a d-Ctrl plug-in GUI and their automation data is recorded to the automation lane of the selected DAW channel. In playback the plug-in converts the stored automation data from the DAW into d-Ctrl messages and routes these back to the console via the SSL Logictivity Network connection.

Automation data can be viewed and edited as normal plug-in data in the DAW tracks. The console Fader Absolute and Trim values are saved using the same dB law as your selected DAW automation so that the ‘Paste Special’ command can be used to copy existing DAW fader data into the plug-in. d-Ctrl retains all the key operational elements of SSL’s Signature Mix System with much loved features such as JOIN, REVISE, MOTORS OFF and SNAP Override all actions from dedicated front panel switches. The MOTORS OFF mode offers the full non-moving fader SSL VCA mix experience as preferred by key industry re-mixers. A new MOTORS OFF, Touch Write mode emulates the SSL G Series Mix system Immediate Pickup (IP) option. d-Ctrl also works with SSLDuality delta consoles.

Currently there isn't an AU d-Ctrl plug for use in Logic. During beta testing of the d-Ctrl automation system SSL uncovered a significant limitation in the way Logic handles automation data from the delta-control plug-in. For this reason, we put on hold our plans to release an AU version for use with Logic. SSL is researching ways to overcome this limitation and we will make an announcement of an AU delta-ctrl plug-in in due course.

Please fill out the form below and a Vintage King Audio Consultant will contact you with a ship date for the SSL AWS 924 Delta 24-Channel/8-Bus Analog Console .

Have a better price in mind for the SSL AWS 924 Delta 24-Channel/8-Bus Analog Console that you've been checking out? We're willing to work on it!Please fill out the form below with your contact information.Once the form is submitted, a Vintage King Audio Consultant will contact you as soon as possible with our best price on this product.

VIEW
48313
I would like to thank VK for the wonderful sales assistance, service and prices. This was my first purchase with you and it won't be my last. I only wish I'd discovered you years ago!
Matthew R.
I had two Grammy wins this year - Ray LaMontagne & Carolina Chocolate Drops. Both made with help from Vintage King!
Ryan F.
In almost 20 years in Pro audio buying, never did I receive a unit so well packed and exactly as described. Works flawlessly. The whole process has been so smooth. I will never hesitate to do business with you guys in the future and will recommend you to everyone I know.
Martin C.
This was my first experience buying something from Vintage King (although I surf the "used" categories on the website frequently!), and, despite being on the other side of the world, I had absolutely no trouble and everything went very smoothly.
Phil T.
The speed of delivery exceeded my expectations! I was VERY pleased that my shipment arrived in time for a scheduled vocal tracking session. The packing insured that my order arrived safely. And the sales staff responded quickly to questions regarding the product.
James P.
Thank you so much! Vintage King has been so fair and easy to work with. I can't thank you enough. It feels good to trust such a hefty purchase to folks who are so helpful and knowledgeable. Vintage King is a sound designers dream store.
Noa L.
You guys have excellent customer service and I am excited about the next upgrade I complete on my fifth recording facility. I've been in the studio business for forty plus years. The salesman I worked with at Vintage King was the best of the best. You all rock!
Robby T.
I would recommend Vintage King to any one looking for top-class gear, unbeatable customer service and the best prices on the map!
Jake D.
My experience with Vintage King was excellent. The order was here fast considering it was out of stock. The sales person had SKB send it to me directly and I couldn't have been more pleased.
Michael D.
From the minute I placed my order I was kept well-informed through each step in your process. Even though I was buying a comparatively modest piece of gear, your attention to detail made me feel like I was purchasing a six-figure mixing desk.
Thomas W.
I am a new customer of yours. You guys provided me the absolute best deals in ordering all the equipment to power my brand new recording studio. Your customer service is amazing and i will always deal with you from here on out.
Rob M.
Thanks for your great service and getting this out today. You guys really are the Kings!
Alan B.
Better than expected! Truly impeccable service. Your team was professional, knowledgeable, provided speedy delivery above and beyond standard. Vintage King Audio is definitely my go to for all of my audio and information needs.
James O.