$ 3,399 .00
or $71/month for 48 months 0% interest for 48 months. 48 equal monthly payments required. Learn more
Ships directly from SPL Audio
Note: This item may not be returnable or could require a restocking fee. Contact one of our Audio Consultants for more details. This item ships directly to you from the manufacturer. To ensure that the manufacturer currently has stock, please chat, call or email for the latest availability status. 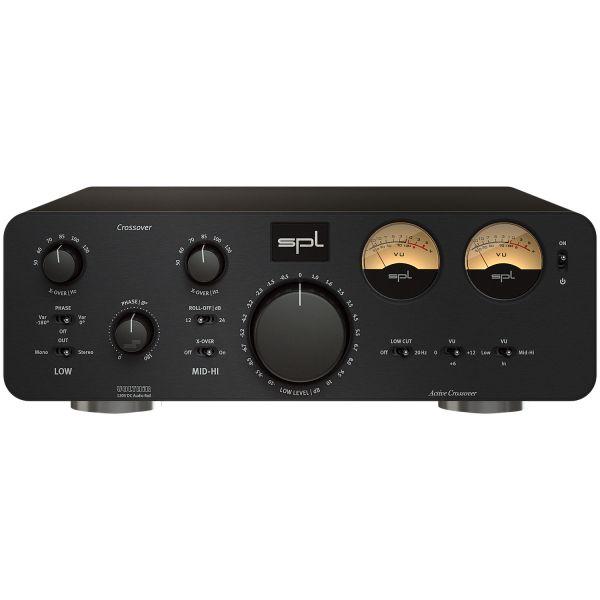 The SPL Crossover is a one-of-a-kind active analog 2-way crossover - it is all analog - no DSPs, no AD/DA conversion. It is active and fits all kinds of speakers. You can tune crossover frequencies and phase response all in the analog domain in real time with real switches and controls, and, of course, with SPL's unique VOLTAiR technology. That means headroom, dynamic range and real sound in abundance.

When you add a subwoofers to your top/main speakers the crossover is most often digital. That is been sold as a plus – but it isn't. Because digital signal processing involves AD-conversion, DSP processing and DA-conversion, the audio signal undergoes significant treatments not ideal for audiophile quality playback. But now, here is the solution: the SPL Crossover. Fully analog, 120 V VOLTAiR technology, user friendly and amazing sounding.

The Crossover features a fully variable phase control to perfectly align the phase of the subwoofer(s) to the top/main speakers. The Phase control can be switched off and taken out of the signal path if not needed to maintain the shortest possible signal flow. If needed, the toggle switch engages the Phase control at 0° phase or at -180° phase. From these two starting points the phase can be varied from 0° to +180° resulting in a full 360° phase circle with the Phase control pot.

The MID-HI filter can be switched on and off. This is useful in case the top/main speakers shall operate full range and only the LOW filter shall roll off the subwoofer at a defined frequency.

An additional Low Cut filter is provided to cut all frequencies below 20 Hz. This is especially useful to relieve the power amplifiers from amplifying inaudible very low frequent signals that only cause the chassis to move excessively.

The output level of the subwoofer can be varied from -10 dB to +10 dB. After setting the crossover frequency and aligning the phase the level is the third control parameter. SPL have opted for a big knob because this control is not only to adjust the speaker system but it can also be fun to use when recordings lack bass content or the medium, such as vinyl does not delivery much bass.

The two VU meters show the volume units. It's mechanical design "slows" the measurement, averaging out peaks and troughs of short duration, and reflects thereby more the perceived loudness or 'energy'. As the Crossover is operating after the preamplifier the audio level is rather low and the needle would remain left most of the time. For a better visibility the sensitivity of the VU meters can be increased with the VU toggle switch. Another toggle switch allows selecting the levels to be displayed. The standard position would be "In" showing the input levels. The VUs can alternatively show the levels of each section LOW and MID-Hi.

Please fill out the form below and a Vintage King Audio Consultant will contact you with a ship date for the SPL Crossover - Black.

Have a better price in mind for the SPL Crossover - Black that you've been checking out? We're willing to work on it!Please fill out the form below with your contact information.Once the form is submitted, a Vintage King Audio Consultant will contact you as soon as possible with our best price on this product.

VIEW
108823
I would like to thank VK for the wonderful sales assistance, service and prices. This was my first purchase with you and it won't be my last. I only wish I'd discovered you years ago!
Matthew R.
I had two Grammy wins this year - Ray LaMontagne & Carolina Chocolate Drops. Both made with help from Vintage King!
Ryan F.
In almost 20 years in Pro audio buying, never did I receive a unit so well packed and exactly as described. Works flawlessly. The whole process has been so smooth. I will never hesitate to do business with you guys in the future and will recommend you to everyone I know.
Martin C.
This was my first experience buying something from Vintage King (although I surf the "used" categories on the website frequently!), and, despite being on the other side of the world, I had absolutely no trouble and everything went very smoothly.
Phil T.
The speed of delivery exceeded my expectations! I was VERY pleased that my shipment arrived in time for a scheduled vocal tracking session. The packing insured that my order arrived safely. And the sales staff responded quickly to questions regarding the product.
James P.
Thank you so much! Vintage King has been so fair and easy to work with. I can't thank you enough. It feels good to trust such a hefty purchase to folks who are so helpful and knowledgeable. Vintage King is a sound designers dream store.
Noa L.
You guys have excellent customer service and I am excited about the next upgrade I complete on my fifth recording facility. I've been in the studio business for forty plus years. The salesman I worked with at Vintage King was the best of the best. You all rock!
Robby T.
I would recommend Vintage King to any one looking for top-class gear, unbeatable customer service and the best prices on the map!
Jake D.
My experience with Vintage King was excellent. The order was here fast considering it was out of stock. The sales person had SKB send it to me directly and I couldn't have been more pleased.
Michael D.
From the minute I placed my order I was kept well-informed through each step in your process. Even though I was buying a comparatively modest piece of gear, your attention to detail made me feel like I was purchasing a six-figure mixing desk.
Thomas W.
I am a new customer of yours. You guys provided me the absolute best deals in ordering all the equipment to power my brand new recording studio. Your customer service is amazing and i will always deal with you from here on out.
Rob M.
Thanks for your great service and getting this out today. You guys really are the Kings!
Alan B.
Better than expected! Truly impeccable service. Your team was professional, knowledgeable, provided speedy delivery above and beyond standard. Vintage King Audio is definitely my go to for all of my audio and information needs.
James O.