$ 499 .99
No interest if paid in full within 12 months Learn more
Ships directly from Sonnet Technologies
Note: This item may not be returnable or could require a restocking fee. Contact one of our Audio Consultants for more details. This item ships directly to you from the manufacturer. To ensure that the manufacturer currently has stock, please chat, call or email for the latest availability status. 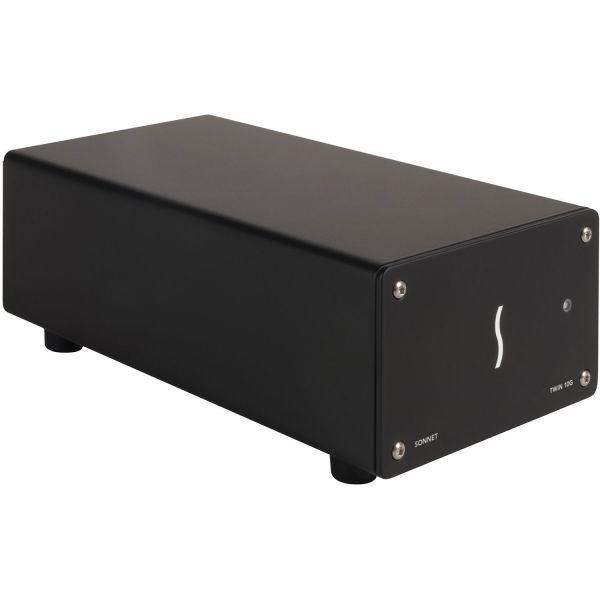 Increased demand for greater data transfer speeds and more bandwidth over shared networks, plus the need for HD video editing support on high-performance shared storage systems has driven the explosion in demand for 10 Gigabit Ethernet (10GbE) networking—offering ten times the performance of Gigabit Ethernet, the most common wired network connection today. It’s no wonder. And yet, most computers aren’t equipped to get you connected. If your computer has a Thunderbolt 3 port, you are in luck - the Sonnet Twin 10G Thunderbolt 3 dual-port 10 Gigabit Ethernet adapter is the powerfully simple and cost effective solution for adding blazing-fast 10GBASE-T 10GbE network connectivity to any Mac or Windows computer with Thunderbolt 3 ports. The Twin 10G Thunderbolt 3 Edition adapter is equipped with two RJ45 ports, enabling it to connect to 10GbE infrastructure via inexpensive CAT-6 or CAT-6A copper cabling at distances up to 55 or 100 meters, respectively.

How simple? Just connect the Twin 10G Thunderbolt 3 Edition adapter to your computer via the included Thunderbolt 3 (40Gbps) cable, download and install a driver, connect the adapter to the network switch or directly to 10GbE-enabled storage via CAT-6 or CAT-6A cables, and configure the adapter’s settings through the macOS Network control panel or Windows Device Manager.

The Twin 10G Thunderbolt 3 Edition adapter attains its high throughput performance and low host-CPU utilization through functions such as flow control, 64-bit address support for systems using more than 4GB of physical memory; and stateless offloads such as TCP, UDP and IPv4 checksum offloading. These processes enable your computer to perform better while large files transfers or high I/O operations take place. This Sonnet adapter’s dual 10GbE connections support transparent failover to keep your computer connected in case a single cable is disconnected or one of the ports fails, and also support link aggregation (teaming) for increased throughput!

The Twin 10G Thunderbolt 3 Edition adapter is compact enough to easily fit in most workspaces, yet large enough to support proper airflow inside the case—its design enables the adapter’s temperature-controlled, variable-speed fan to keep the adapter running cool and whisper-quiet at all times, making it suitable for use in noise-sensitive environments. Constructed of rugged and lightweight aluminum, the adapter’s outer shell securely protects the inner circuitry.

Thunderbolt 3 — The USB-C That Does It All

The Twin 10G Thunderbolt 3 Edition adapter includes two Thunderbolt 3 ports; the first connects the adapter to your computer, while the second supports daisy-chaining of up to five additional Thunderbolt peripheral devices to a single port on your computer. The Sonnet adapter includes 10Gbps USB 3.1 Gen 2 support, meaning you can connect a USB device to the second port using the proper cable or adapter. The Twin 10G also provides full support for connecting two 4K displays @ 60 Hz or one 5K display @ 60 Hz. For connected devices requiring extra power, 15 watts is provided to connected bus-powered devices.

Please fill out the form below and a Vintage King Audio Consultant will contact you with a ship date for the Sonnet Twin 10G Thunderbolt 3.

Have a better price in mind for the Sonnet Twin 10G Thunderbolt 3 that you've been checking out? We're willing to work on it!Please fill out the form below with your contact information.Once the form is submitted, a Vintage King Audio Consultant will contact you as soon as possible with our best price on this product.

VIEW
81698
I would like to thank VK for the wonderful sales assistance, service and prices. This was my first purchase with you and it won't be my last. I only wish I'd discovered you years ago!
Matthew R.
I had two Grammy wins this year - Ray LaMontagne & Carolina Chocolate Drops. Both made with help from Vintage King!
Ryan F.
In almost 20 years in Pro audio buying, never did I receive a unit so well packed and exactly as described. Works flawlessly. The whole process has been so smooth. I will never hesitate to do business with you guys in the future and will recommend you to everyone I know.
Martin C.
This was my first experience buying something from Vintage King (although I surf the "used" categories on the website frequently!), and, despite being on the other side of the world, I had absolutely no trouble and everything went very smoothly.
Phil T.
The speed of delivery exceeded my expectations! I was VERY pleased that my shipment arrived in time for a scheduled vocal tracking session. The packing insured that my order arrived safely. And the sales staff responded quickly to questions regarding the product.
James P.
Thank you so much! Vintage King has been so fair and easy to work with. I can't thank you enough. It feels good to trust such a hefty purchase to folks who are so helpful and knowledgeable. Vintage King is a sound designers dream store.
Noa L.
You guys have excellent customer service and I am excited about the next upgrade I complete on my fifth recording facility. I've been in the studio business for forty plus years. The salesman I worked with at Vintage King was the best of the best. You all rock!
Robby T.
I would recommend Vintage King to any one looking for top-class gear, unbeatable customer service and the best prices on the map!
Jake D.
My experience with Vintage King was excellent. The order was here fast considering it was out of stock. The sales person had SKB send it to me directly and I couldn't have been more pleased.
Michael D.
From the minute I placed my order I was kept well-informed through each step in your process. Even though I was buying a comparatively modest piece of gear, your attention to detail made me feel like I was purchasing a six-figure mixing desk.
Thomas W.
I am a new customer of yours. You guys provided me the absolute best deals in ordering all the equipment to power my brand new recording studio. Your customer service is amazing and i will always deal with you from here on out.
Rob M.
Thanks for your great service and getting this out today. You guys really are the Kings!
Alan B.
Better than expected! Truly impeccable service. Your team was professional, knowledgeable, provided speedy delivery above and beyond standard. Vintage King Audio is definitely my go to for all of my audio and information needs.
James O.