Vintage King Marketplace Special Access
Your Resource for Exclusive
Pricing on the Best in Pro Audio You are logged in and shopping with special discount pricing
Shop the Hottest Prices of the Summer New Deals Drop Daily
On Sale!

The complete Console 1 mixing ecosystem including the Console 1 MKII, Console 1 Fader with a beautiful wooden desktop stand from ProSoCoustic featuring Vintage King Exclusive Black Stain!
Shop All Softube
Skip to the end of the images gallery 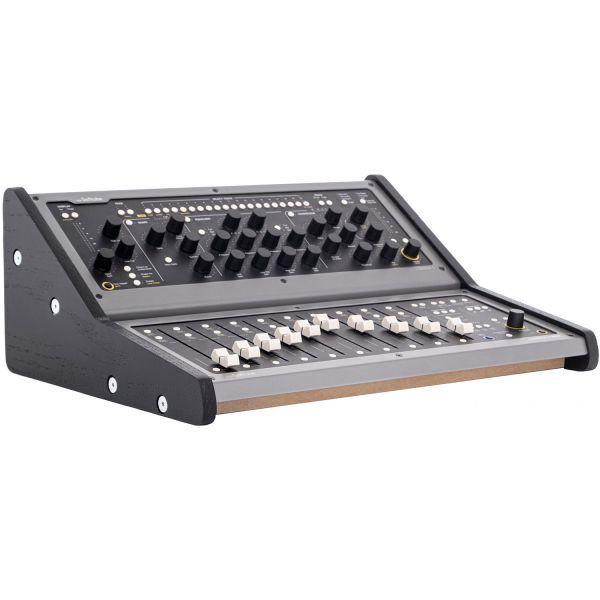 The Softube Console 1 mixing ecosystem is so much more than a simple DAW/plug-in controller. It’s an efficient, elegant, and amazing-sounding modern mixing solution, combining hardware and software to give users the best of both worlds: the versatility, affordability, and usability of in-the-box mixing, alongside the workflow, feel, and focus dedicated hardware can bring. Available exclusively from VK, get the Console 1 MKII, Console 1 Fader with a beautiful wooden desktop stand from ProSoCoustic featuring Vintage King Exclusive Black Stain!

The Softube Console 1, the next generation mixer, is a unique centerpiece for the DAW based studio. The hardware lets you quickly switch between your tracks and control gate, EQ, compressor and more. The Console 1 software gives you the sound of a classic Solid State Logic console.

Console 1 is not a DAW controller, or even a plug-in controller. It's a separate hardware/software mixer that works in tandem with your DAW. Use one of the track selector buttons on the hardware to select the track you want to work on. Then use the physical knobs and buttons to adjust the included gate, EQ, compressor, high/low cut filters, transient shaper and emulated analog console distortion. Select a track, tweak the knobs. Select another track, tweak the knobs—that is essentially the workflow of Console 1.

Each parameter has a corresponding knob or button on the hardware. The track count is unlimited, parameter changes can be automated and all your settings are saved with the DAW project for total recall.

Included in the Console 1 package is Softube's model of Solid State Logic SL 4000 E—one of the most classic and widely used analog consoles in the world. Softube's model has been scrutinized by Solid State Logic's own experts, who have officially endorsed it. The channel strip includes the coveted black knob E 242 equalizer, the classic channel compressor, the musical expander/gate and the sweet high and low cut filters from the SL 4000 E channel.

Softube have also included a model of the harmonics, distortion and non-linearities obtained from overdriving the SL 4000 E console, so you can drive it hard for that slighly gritty and coherent sound that the SL 4000 E is famous for. Adding to that is Softube's own Transient Shaper, which is not a part of the SL 4000 E console or any other analog unit for that matter.

The On-Screen Display—Console 1's mixer window—gives you perfect and detailed visual feedback of the selected channel's settings. At the bottom of the window, the meter bridge displays the levels of the currently selected channel bank (unlimited number of banks, each holds 20 channels). But you also get plenty of visual feedback from the hardware. LED rings show the knobs' positions, and meters display input and output levels, as well as gate and compressor gain reduction. So for an even more analog mix experience, just turn off the On-Screen Display and use your ears! You won't get lost.

Apart from basic features such as Solo, Mute and Phase Invert, the system offers several additional functions to make your mix work easier, all controlled from the Console 1 hardware. This includes the ability of grouping any or all channels to tweak the settings simultaneously across the group, and changing the order of the effect sections. You can copy settings from one channel strip to the other, or just the sections you want to. You can also use parallel compression and and route an external sidechain signal into the gate or compressor. You can save and call up presets for the entire channel strip or the separate channel sections. The On-Screen Display is toggled on and off with a dedicated button on the hardware.

The History function is simply an undo feature that allows you to go back in time and undo all parameter adjustments you have performed. Very few DAWs offer an undo function for plug-in settings, but you get that with Console 1.

There are many ways to mix a masterpiece, but riding faders is a matter of muscle memory for a lot of us. And for good reason – reaching out and grabbing five or ten different sounds or groups at once, and quickly adjusting, listening, adjusting, listening, balancing... it’s a full-body discipline, and software alone can’t come close.

Tapping into the same purpose-designed software environment as the original Console 1 channel strip controller, Fader brings new levels of control over the wider world of mixing. Ride up to ten channels at once, working volume, high-and-low-cut filter values, drive and drive character (modeled desk saturation), and more. Then page up for ten more channels. And ten more, giving easy access to the whole mix, even when tracks number into the hundreds.

The single knob on Console 1 Fader offers control of pan per track, but also unlocks a powerful stereo spatialization tool, to widen or consolidate individual tracks, situating each sound perfectly in the mix.

Better still, with Softube's innovative new Layer Mode the user can create layers of tracks, putting many levels of mixing at their fingertips. Fader can easily low cut all the guitars at once, or saturate groups early on for a top-down effect in seconds.

Console 1 Fader can be used alone, or in combination with the original Console 1 channel strip controller for a tight ‘complete desk’ experience. Multiple Fader units can even be used together to build the ideal workflow for a specific studio.

Improving feel and workflow, and making the best of hardware and software available in one place, Fader allows users to raise the sound quality bar to new heights. Mixing a masterpiece isn’t easy, but with Console 1 Fader it’s a new kind of joy.

Please fill out the form below and a Vintage King Audio Consultant will contact you with a ship date for the Softube Console 1 System with Wood Desktop Stand - VK Exclusive Black.

Have a better price in mind for the Softube Console 1 System with Wood Desktop Stand - VK Exclusive Black that you've been checking out? We're willing to work on it!Please fill out the form below with your contact information.Once the form is submitted, a Vintage King Audio Consultant will contact you as soon as possible with our best price on this product.

VIEW
141801
I would like to thank VK for the wonderful sales assistance, service and prices. This was my first purchase with you and it won't be my last. I only wish I'd discovered you years ago!
Matthew R.
I had two Grammy wins this year - Ray LaMontagne & Carolina Chocolate Drops. Both made with help from Vintage King!
Ryan F.
In almost 20 years in Pro audio buying, never did I receive a unit so well packed and exactly as described. Works flawlessly. The whole process has been so smooth. I will never hesitate to do business with you guys in the future and will recommend you to everyone I know.
Martin C.
This was my first experience buying something from Vintage King (although I surf the "used" categories on the website frequently!), and, despite being on the other side of the world, I had absolutely no trouble and everything went very smoothly.
Phil T.
The speed of delivery exceeded my expectations! I was VERY pleased that my shipment arrived in time for a scheduled vocal tracking session. The packing insured that my order arrived safely. And the sales staff responded quickly to questions regarding the product.
James P.
Thank you so much! Vintage King has been so fair and easy to work with. I can't thank you enough. It feels good to trust such a hefty purchase to folks who are so helpful and knowledgeable. Vintage King is a sound designers dream store.
Noa L.
You guys have excellent customer service and I am excited about the next upgrade I complete on my fifth recording facility. I've been in the studio business for forty plus years. The salesman I worked with at Vintage King was the best of the best. You all rock!
Robby T.
I would recommend Vintage King to any one looking for top-class gear, unbeatable customer service and the best prices on the map!
Jake D.
My experience with Vintage King was excellent. The order was here fast considering it was out of stock. The sales person had SKB send it to me directly and I couldn't have been more pleased.
Michael D.
From the minute I placed my order I was kept well-informed through each step in your process. Even though I was buying a comparatively modest piece of gear, your attention to detail made me feel like I was purchasing a six-figure mixing desk.
Thomas W.
I am a new customer of yours. You guys provided me the absolute best deals in ordering all the equipment to power my brand new recording studio. Your customer service is amazing and i will always deal with you from here on out.
Rob M.
Thanks for your great service and getting this out today. You guys really are the Kings!
Alan B.
Better than expected! Truly impeccable service. Your team was professional, knowledgeable, provided speedy delivery above and beyond standard. Vintage King Audio is definitely my go to for all of my audio and information needs.
James O.