$ 999 .00
or $21/month for 48 months 0% interest for 48 months. 48 equal monthly payments required. Learn more
In Stock
Item is in stock and will ship the next business day. Place your order before 4:00pm ET Mon-Fri and we will ship your items the same day. 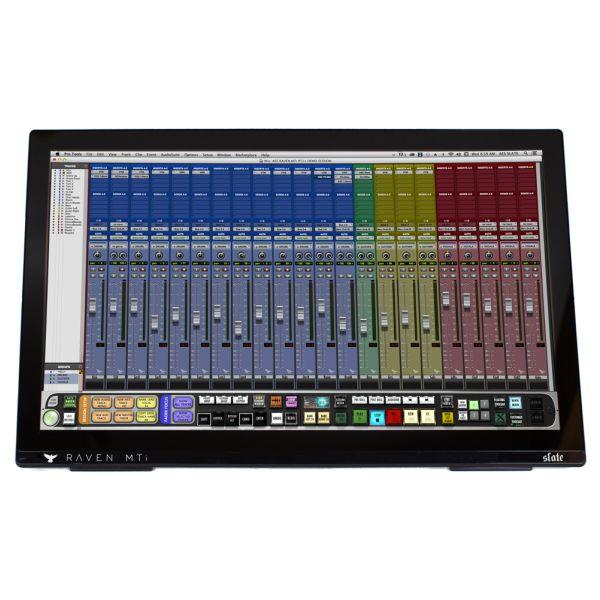 Slate Media Technology’s RAVEN MTX multi-touch production console, launched in 2012, revolutionized Pro Tools control and workflows for professional production environments, virtualizing the entire studio and putting it at the engineer’s fingertips. With the introduction of the Slate Media Technology Raven MTi2 with RAVEN 3.3 DAW Control Software, Slate has brought the power and efficiency of multi-touch workstation operation to even the most budget-conscious studio while also significantly expanding the choice of DAWs that can be controlled from the system’s 27-inch multi-touch display.

The Slate RAVEN MTi2, with it's 27-inch HD resolution (1920 x 1080) LED backlit 10-touch display, provides access to faders, pans and sends and enables users to tweak plug-ins with their fingers as if they were physical hardware. The new Faders 3.0 algorithm integrates the precise control of multi-touch 100 mm virtual faders directly into the DAW, offering seamless control of mix levels and automation with an intuitive tactile action that is not only comfortable but also fun to use. A Fine Fader mode quadruples the resolution of the faders, enabling users to make the most minute adjustments.

In Toolbar mode, DAW functions such as transport controls, the edit/mix window selector and tracking tools including record looping, click, create group and undo are exactly where you need them. And you can use intuitive, multi-touch gestures on the RAVEN NAVPAD to perform functions such as scrub/shuttle, waveform zoom, track zoom and track banking, as well as RAVEN Batch Commands.

Slate’s RAVEN Batch Command System offers a series of preset and customizable buttons that can execute up to 1,000 key commands and mouse clicks automatically. With the push of just one button you can instantly create headphone sends, name tracks, put entire drum tracks on the grid, export stems and much, much more. The Batch Command System is pre-programmed with 100 preset batch commands for all supported DAWs, with layouts for music, mastering, post production and other applications.

The next evolution of the RAVEN Control software is called Gestures, and allows classic multi-touch gestures to control important elements of the DAW such as opening and closing plug-ins, muting and unmuting tracks, zooming in and out, and more. RAVEN 3.3 additionally adds touch driver updates across all products, enhanced triple-screen support for the RAVEN Z3 and new “Mixer Lock" feature for Pro Tools.

Slate Remote, a free iOS app for RAVEN MTi2 users, automatically synchronizes with your RAVEN session via a Wi-Fi network to provide access to your custom Batch Commands, enabling you to remotely perform time-saving tasks from the palm of your hand.

I don’t know how I went without this tool.

works really well with protools and digital performer. huge time saver and find myself less tired to looking up at a ‘normal’ screen.

Okay, So I was in need of a new monitor and this looked like a safe bet, I thought, It's a good size and offers some bonus features. Well after having it for about 3 months now, I have found that it is way more than just a nice monitor. I spent a day setting up the Batch Commander and it has saved me so much time when setting up for tracking or mixing sessions. One touch and i can name, arm and add all my usual plug-ins to each track. All my UA plugs respond to the touch as if they were designed for it. It crushed my expectations and has proven itself a integral part of my studio and work flow.

Please fill out the form below and a Vintage King Audio Consultant will contact you with a ship date for the Steven Slate Audio Raven MTi2.

Have a better price in mind for the Steven Slate Audio Raven MTi2 that you've been checking out? We're willing to work on it!Please fill out the form below with your contact information.Once the form is submitted, a Vintage King Audio Consultant will contact you as soon as possible with our best price on this product.