Vintage King Marketplace Special Access
Your Resource for Exclusive
Pricing on the Best in Pro Audio You are logged in and shopping with special discount pricing
September Savings | New Ways To Save For Fall 2021
$ 1,395 .00
You Save: $604.00
Regular: $ 1,999 .00
No interest if paid in full within 6 months Learn more
In Stock
Orders placed by 4:00pm ET Monday - Friday will ship the same day. Place your order before 4:00pm ET Mon-Fri and we will ship your items the same day. 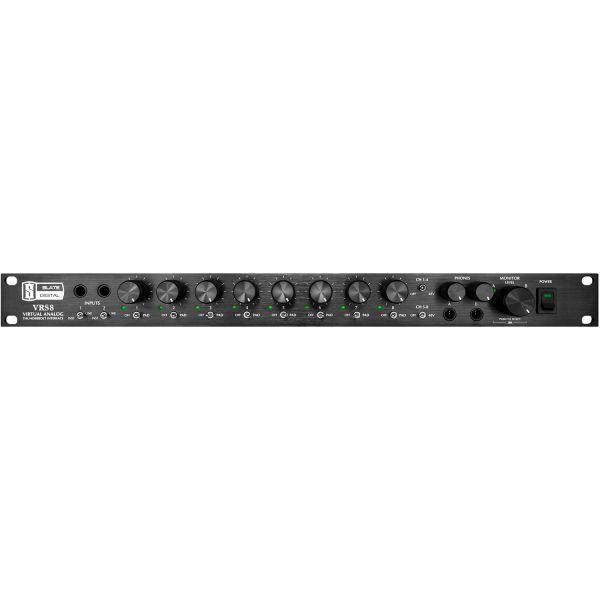 Steven Slate and his team spent three years developing the new Slate Digital VRS8, the final piece in a suite of software and hardware tools that puts a Virtual Recording Studio in a single rack space, and it shows.

The Slate Digital VRS8 is packed with boutique components and boasts specs that reflects Slate’s “no compromise” design. This 8-channel audio interface combines the company’s familiar Ultra Linear microphone preamps with custom converter and CPU chips to deliver an industry-leading 124 dB of dynamic range across all eight inputs and an astonishingly low latency, whether using Thunderbolt (Mac) or PCIe (Mac/PC) connectivity.

These are the same transparent VMS-One preamps from Slate’s award-winning Virtual Microphone System, which means you can run any of the company’s microphone and preamp modeling software in real time. Slate’s new LLN (Low Latency Native) technology uses a hardwired custom chipset to enable a round-trip latency at 96 kHz of just 0.7 milliseconds, the same as Pro Tools | HDX and the lowest of any native solution. This enables you to monitor through Slate’s mic and preamp emulations while tracking or to change your mind and choose different models during your mix process. Unlike other interfaces, you control your preamp gains on the front of the Slate Digital VRS8, not through a software menu.

Additionally, there are two separate monitor mixes with discrete custom headphone amplifier circuitry, speaker switching capabilities, native — not USB — MIDI IO and satellite-grade clocking technology and this virtual recording studio in a 1RU box gives you the same experience as you would have with a rack full of pro audio tools.

Slate Digital has removed the CPU overhead and latency issues of USB connectivity, integrating PCIe and Thunderbolt options, which offer identical performance. You can link up to six Slate Digital VRS8s over Thunderbolt to achieve 48 inputs and outputs.

As Slate Digital says, it’s the studio of your dreams at a price you can afford.

Please fill out the form below and a Vintage King Audio Consultant will contact you with a ship date for the Slate Digital VRS8 (Demo Deal).

Have a better price in mind for the Slate Digital VRS8 (Demo Deal) that you've been checking out? We're willing to work on it!Please fill out the form below with your contact information.Once the form is submitted, a Vintage King Audio Consultant will contact you as soon as possible with our best price on this product.

VIEW
117580
I would like to thank VK for the wonderful sales assistance, service and prices. This was my first purchase with you and it won't be my last. I only wish I'd discovered you years ago!
Matthew R.
I had two Grammy wins this year - Ray LaMontagne & Carolina Chocolate Drops. Both made with help from Vintage King!
Ryan F.
In almost 20 years in Pro audio buying, never did I receive a unit so well packed and exactly as described. Works flawlessly. The whole process has been so smooth. I will never hesitate to do business with you guys in the future and will recommend you to everyone I know.
Martin C.
This was my first experience buying something from Vintage King (although I surf the "used" categories on the website frequently!), and, despite being on the other side of the world, I had absolutely no trouble and everything went very smoothly.
Phil T.
The speed of delivery exceeded my expectations! I was VERY pleased that my shipment arrived in time for a scheduled vocal tracking session. The packing insured that my order arrived safely. And the sales staff responded quickly to questions regarding the product.
James P.
Thank you so much! Vintage King has been so fair and easy to work with. I can't thank you enough. It feels good to trust such a hefty purchase to folks who are so helpful and knowledgeable. Vintage King is a sound designers dream store.
Noa L.
You guys have excellent customer service and I am excited about the next upgrade I complete on my fifth recording facility. I've been in the studio business for forty plus years. The salesman I worked with at Vintage King was the best of the best. You all rock!
Robby T.
I would recommend Vintage King to any one looking for top-class gear, unbeatable customer service and the best prices on the map!
Jake D.
My experience with Vintage King was excellent. The order was here fast considering it was out of stock. The sales person had SKB send it to me directly and I couldn't have been more pleased.
Michael D.
From the minute I placed my order I was kept well-informed through each step in your process. Even though I was buying a comparatively modest piece of gear, your attention to detail made me feel like I was purchasing a six-figure mixing desk.
Thomas W.
I am a new customer of yours. You guys provided me the absolute best deals in ordering all the equipment to power my brand new recording studio. Your customer service is amazing and i will always deal with you from here on out.
Rob M.
Thanks for your great service and getting this out today. You guys really are the Kings!
Alan B.
Better than expected! Truly impeccable service. Your team was professional, knowledgeable, provided speedy delivery above and beyond standard. Vintage King Audio is definitely my go to for all of my audio and information needs.
James O.