$ 5,899 .00
No interest if paid in full within 18 months Learn more
Ships directly from Schoeps Mikrofone
Note: This item may not be returnable or could require a restocking fee. Contact one of our Audio Consultants for more details. This item ships directly to you from the manufacturer. To ensure that the manufacturer currently has stock, please chat, call or email for the latest availability status. 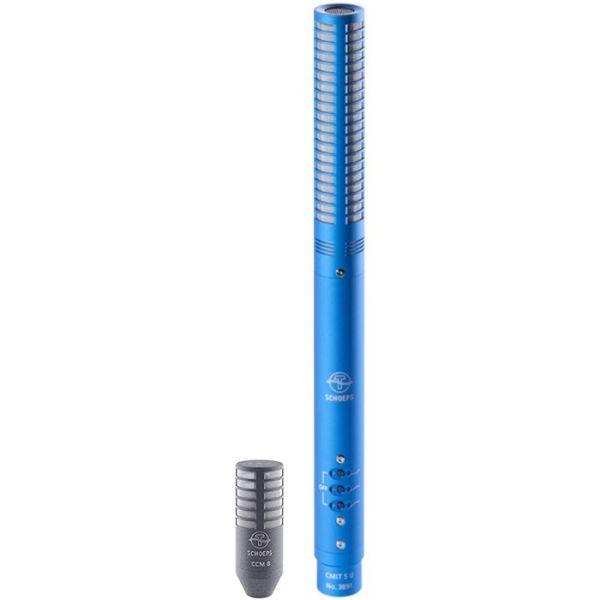 This capsule type is a true dipole (bidirectional) transducer, operating with a single diaphragm. Its main axis is at a right angle to the capsule, and is marked at 0° and 180° with a red and a black dot respectively.

The inherent qualities of a pure pressure-gradient transducer are readily observed in this capsule type:

The directivity index of a figure-8 pattern is the same as that of a cardioid; if microphones with these two patterns are placed at the same distance from a sound source, a quantitatively similar balance of direct and reverberant sound would be picked up. In practice such a comparison would be deceptive, however, since a figure-8 does not respond to sound coming from the sides, from above or from beneath its main axis as does a cardioid. The figure-8 has a rear lobe equal in sensitivity to its front lobe, and this exactly makes up the quantitative difference – but in normally reverberant settings, the sound reaching a figure-8's rear lobe will be delayed and dispersed to a considerably greater extent than the reverberant sound energy which a cardioid picks up from its front and sides; the reflected sound will typically be subject to far more high frequency absorption as well. Thus the reverberant sound energy picked up by a figure-8, though theoretically equal in amount, is quite different in character from that which would be picked up by a cardioid in the same position.

The sound quality of the MK 8 is clear and neutral. The frequency response rolls off above 16 kHz.

Rycote is proud to offer the iconic, professional-standard Windshield and Shock Mount system specifically engineered for stereo microphone configurations. With variable levels of wind protection and maximum shock isolation, these systems are designed for precision microphone placement. In addition to single-point stereo microphones, we have models specifically designed for use with pencil, shotgun, and compact microphones in MS, XY or ORTF configurations.

The Stereo Windshield is a lightweight, durable basket made from flexible grey plastic netting with a screening material attached. Designed for use with the various suspensions, this system provides excellent wind-noise reduction of up to 30 dB with minimal High-Frequency loss.

Please fill out the form below and a Vintage King Audio Consultant will contact you with a ship date for the Schoeps CMIT M/S Shotgun and Figure-8 Microphone Set.

Have a better price in mind for the Schoeps CMIT M/S Shotgun and Figure-8 Microphone Set that you've been checking out? We're willing to work on it!Please fill out the form below with your contact information.Once the form is submitted, a Vintage King Audio Consultant will contact you as soon as possible with our best price on this product.