$ 749 .00
or $16/month for 48 months 0% interest for 48 months. 48 equal monthly payments required. Learn more
Special Order
Note: This item may not be returnable or could require a restocking fee. Contact one of our Audio Consultants for more details. Due to the special nature of this item, we order each unit fresh from the factory, exclusively for you! Lead times may vary so please chat, call or email for up-to-date inventory status. 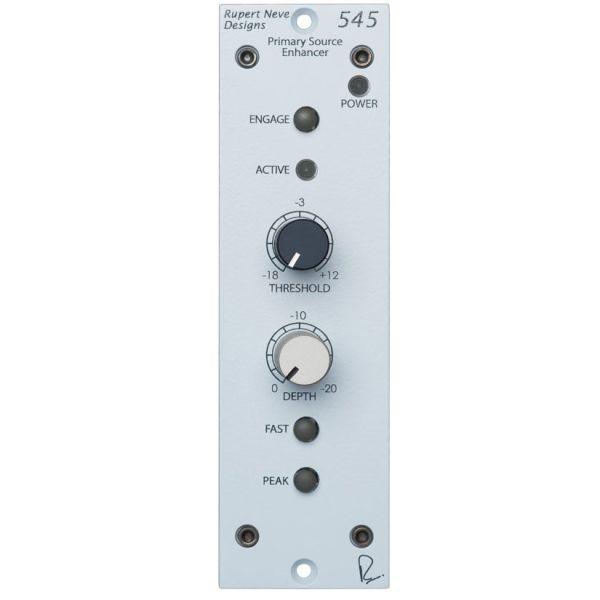 Based around the circuitry in the acclaimed Portico 5045 – which has benefited countless tours, arenas, houses of worship and broadcast stages worldwide – the Rupert Neve Designs 545 is a mono device for vocal or instrumental applications, and is compatible with any 500-Series rack. Exceptionally useful at reducing feedback without negatively impacting the sonic integrity of the source, the 545 effectively increases the level of a live microphone signal before feedback occurs by up to 20 dB. With simply laid out, easily adjustable controls, the 545 is an invaluable addition to any setup where feedback or reverberation are problematic.

The 545 shares some traits with conventional "noise gates", but operates on a different principle. One common aspect is that both reduce the gain during the absence of signal – or more specifically, both begin to attenuate when the level of a signal falls below a certain user-defined threshold. The 545 senses when someone is speaking or singing into the mic and allows the signal to pass through, and senses when the person has stopped talking or singing and reduces the gain appropriately, reducing the system’s tendency to feed back.

Importantly, the 545 does not utilize filtering or digital processing to achieve its significant benefits. Built around Rupert Neve Designs’ custom input and output transformers, its all-analog circuitry provides superb control and sonic performance without compromising the integrity of the source material. This makes the 545 the most intuitive, natural-sounding and effective method of feedback reduction available on the market.

With a minimal control set, the 545’s ease of use makes it ideal even for circumstances where a full-time or experienced engineer is not readily available, and allows for rapid adjustments on-the-fly even during performances.

Please fill out the form below and a Vintage King Audio Consultant will contact you with a ship date for the Rupert Neve Designs 545 500 Series Primary Source Enhancer.

Have a better price in mind for the Rupert Neve Designs 545 500 Series Primary Source Enhancer that you've been checking out? We're willing to work on it!Please fill out the form below with your contact information.Once the form is submitted, a Vintage King Audio Consultant will contact you as soon as possible with our best price on this product.