16 stunning kits made up of 11 instrument types, including custom dream kits that use both TR-808 and TR-909 sounds
MFR# TR-8
Shop All Roland
Skip to the end of the images gallery 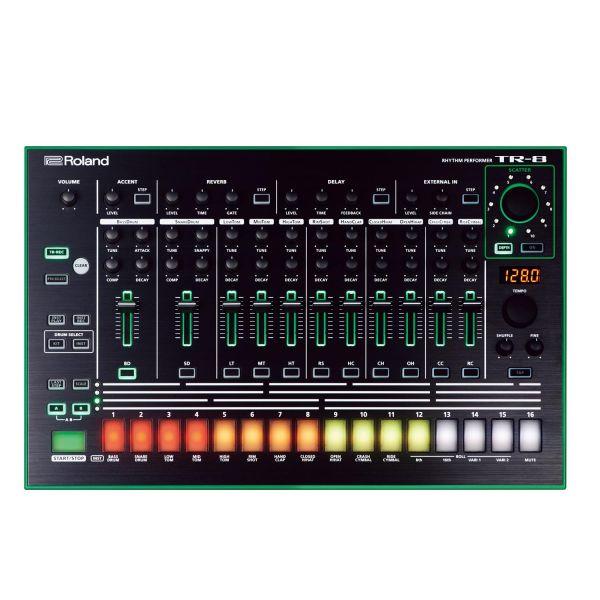 The Roland TR-8 Rhythm Performer is a performance rhythm machine that melds the legendary sound and vibe of the TR-808 and TR-909 with features and functions for the modern age. Genre-defining sounds, classic effects, unprecedented live pattern manipulation, and solid, intuitive performance controls. It’s the TR…evolved.

Unleashed upon an unsuspecting world in the 1980s, the TR-808 and TR-909 produce arguably the most influential drum sounds in modern music. Not only have they appeared on thousands of dance tracks over the course of three decades, they’ve helped define the sound of entire musical genres. From rap and house to techno and trance, the TR-808 and TR-909 have left an indelible mark on the art and culture of music. Roll the drums…

In developing the TR-8, we’ve obsessively analyzed and faithfully recreated every detail and nuance of the analog circuitry of these legendary rhythm machines—the boom and snap of the 808; the thud of the 909; the robotic click of an 808 rim shot or a classic 909 snare roll. It’s all here. But not content with mere recreations, we’ve enhanced these classic instruments with capabilities that go far beyond the original units. Tune and Decay knobs are now present on every instrument, and the Bass Drum and Snare Drum have additional controls such as Attack, Snappy, and Comp. This allows for a wide variety of tones, from subtle ambient percussion to pounding dance grooves. Per-step effects and the massively addictive Scatter function take things into entirely new territory. With the authentic tone and character of the original units and new sound-tweaking capabilities inspired by legions of users, the TR-8 breathes new life into the sounds we all know and love.

Make no mistake—the TR-8 has been carefully designed from the ground up as an instrument to be played. Every control has a solid, predictable feel, with each drum instrument having robust, “playable” faders. Numerous lighted knobs and RGB buttons give both real-time performance feedback and a striking appearance on stage. Pattern creation is creative and intuitive using an evolved version of the TR-REC method, which originated in the TR-808 and eventually became the standard for electronic rhythm programming. Based on detailed analysis of the original TR-808, the TR-REC behavior has been faithfully modeled in the TR-8. But the TR-8 goes well beyond the original, allowing you to seamlessly switch between programming and performance modes, and to introduce lots of groovy rhythmic variations from subtle snare fills to total glitch meltdowns.

Scatter is a unique performance function that gives you detailed real-time control over variations in your patterns and any incoming external input signal.

The TR-8 looks great and is designed to work seamlessly with other products in the AIRA series. In addition, you can connect the TR-8 to your computer via USB to send and receive both audio and MIDI data, including MIDI clock information for syncing with external devices and other AIRA units.

Please fill out the form below and a Vintage King Audio Consultant will contact you with a ship date for the Roland TR-8 Rhythm Performer.

Have a better price in mind for the Roland TR-8 Rhythm Performer that you've been checking out? We're willing to work on it!Please fill out the form below with your contact information.Once the form is submitted, a Vintage King Audio Consultant will contact you as soon as possible with our best price on this product.