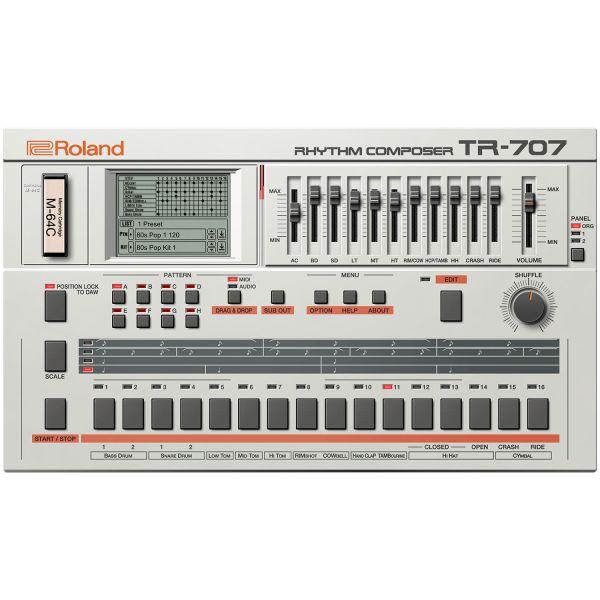 Before the Roland TR-707, Roland released the now-legendary TR-909, which was developed as an analog-digital hybrid rather than a fully digital device. Memory chips and digital-to-analog converters were costly at the time, so there was concern that an all-digital design would make the product unaffordable for many musicians and would have limited sound shaping options. However, after the TR-909’s release, Roland embraced the trend towards digital technology with a drum machine that combined crisp and punchy sampled sounds with the user-friendly TR interface—newly enhanced with the hands-on immediacy of individual faders.

The sound of vintage digital

Developed in the mid-1980s, the TR-707 had a 25 kHz, 8-bit (or 6-bit for some tones) sample playback engine that was primitive by today’s standards. These low bit rates caused quantization noise during the sound’s decay, so non-decaying PCM waveforms were used, with decay introduced later in the analog circuitry. Furthermore, deviations in the clock and the analog circuitry downstream of the D/A converter caused variances in the pitch and decay characteristics. And though the TR-707 lacked the ability to edit sounds, the combination of these factors ultimately led to it being highly sought after for its unique lo-fi punch.

Even though the TR-707 was primarily a digital device, it’s impossible to perfectly capture its unique sound using samples. To replicate its sound in software, Roland started with the original PCM wave data found on the classic machine, then used their advanced circuit modeling to completely recreate the PCM output stage, carefully including all of its quirks and instabilities. Modeling the analog envelope and amplifier stages that came after the D/A converter allowed us to implement tuning, decay, attack, snappy, PCM clock adjustment, and other parameters available in the plugin but not present on the original unit.

The full experience, And more

Great care has gone into making the TR-707 feel special to use, just like the original hardware. Realistic new and aged skins match your vibe, and all 15 original sounds and 64 patterns are included. But these recreations go way beyond vintage with 43 kits and patterns for modern genres, wicked sound-shaping options, powerful sequencing, drag and drop audio/MIDI to your DAW, multi-out, and more. The TR-707 even works together with the available TR-727, with matching kits and patterns that complement each other perfectly. Load a kit, load a pattern, and let the magic happen.

Sound that goes from vintage to radical

Taking inspiration from aftermarket modifications, the advanced circuit modeling offers parameters that let you dig under the hood and modify the sound in all manner of ways. You can adjust the Attack of the Bass Drum and the Snappy of the Snare, and every sound has ultra-smooth tuning and decay. You can even overdrive the internal circuitry, tweak how each PCM waveform behaves, and adjust the PCM clock from 6.25 kHz to 100 kHz for some serious sonic mischief.

While the sequencer on the original TR-707 was the most advanced Roland had ever made, the updated sequencer here goes much further, incorporating features that let you add detail and nuance to your grooves. Opening the sequencer’s expanded edit panel reveals individual sequencer lanes with mute, solo, and adjustable shuffle for each instrument. Per-step accent is included, and each step can trigger hard or weak hits, alternate sounds, three types of sub-steps, and nine types of flams.

From 1985 straight to your DAW

The TR-707 Software Rhythm Composer brings the totally authentic experience of using this classic machine direct to your studio. And while it captures the vintage vibe of the original, it’s thoroughly modern in its support for today’s workflow. The detailed user interface is fully resizable for any display setup, and you can drag and drop MIDI and audio patterns directly to tracks or cells. In addition, the TR-707 plugin is VST3, AAX, and AU compatible and has native support for Apple silicon.

Please fill out the form below and a Vintage King Audio Consultant will contact you with a ship date for the Roland TR-707 Software Rhythm Composer - Electronic Delivery.

Have a better price in mind for the Roland TR-707 Software Rhythm Composer - Electronic Delivery that you've been checking out? We're willing to work on it!Please fill out the form below with your contact information.Once the form is submitted, a Vintage King Audio Consultant will contact you as soon as possible with our best price on this product.