$ 99 .00
No interest if paid in full within 12 months Learn more
PayPal Credit, Express Checkout and Pay in 4 available.
In Stock - Fastest eDelivery 24/7!
This product is delivered by download. Once your order is complete, you will receive a license code via email within minutes. Note: Software is not returnable, so please call if you need advice about compatibility or version. 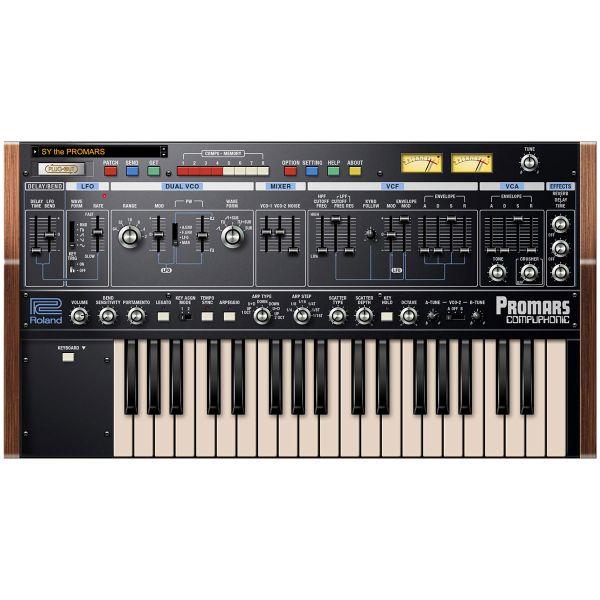 A sibling of the legendary JUPITER-4, this rare and wonderful synthesizer from 1979 features an evocative voice with a thick, rich sound, and is increasingly sought after on the used market. Sonically accurate down to the circuit level, the versatile Roland PROMARS plug-in cranks out big bass and lead tones with the unmistakable character of Roland synths from the era.

Initially designed as a "kid brother" to the JUPITER-4, the deceptively small PROMARS married the stability and flexibility of microprocessor control with the rich sound of analog, and was one of the first synths with onboard memory. This powerful monophonic instrument boasted fat buzzy leads and a powerful low end, proving big things often come in little packages.

While the JUPITER-4 featured one VCO and one sub-oscillator per voice, PROMARS had two of each. Users could detune them to produce a distinctive unison chorus effect, producing sounds like a four-VCO synthesizer. It sounded positively huge, making it a go-to synth for fat, growling basses and searing lead tones.

Plug In Your Own PROMARS

The software version of PROMARS perfectly recreates the sound of this rare, vintage instrument using original design specs and a detailed, part-by-part analysis of each analog circuit. But it also features some new capabilities only found in the plug-in:

PROMARS is also a PLUG-OUT synthesizer that can be hosted in Roland’s SYSTEM-8, SYSTEM-1, and SYSTEM-1m hardware synthesizers. This means you can work in your computer-based DAW or perform live without a computer using the exact same sounds. You can even send sounds back and forth between the hardware and software, and use the hardware as a hands-on controller.

Please fill out the form below and a Vintage King Audio Consultant will contact you with a ship date for the Roland PROMARS Software Synthesizer - Electronic Delivery.

Have a better price in mind for the Roland PROMARS Software Synthesizer - Electronic Delivery that you've been checking out? We're willing to work on it!Please fill out the form below with your contact information.Once the form is submitted, a Vintage King Audio Consultant will contact you as soon as possible with our best price on this product.