$ 3,999 .00
Your Savings: $ 500 .00 Msrp: $ 4,499 .00
or $112/month for 36 months 0% interest for 36 months. 36 equal monthly payments required. Learn more
PayPal Credit, Express Checkout and Pay in 4 available.
Ships directly from RME
Note: This item may not be returnable or could require a restocking fee. Contact one of our Audio Consultants for more details. This item ships directly to you from the manufacturer. To ensure that the manufacturer currently has stock, please chat, call or email for the latest availability status. 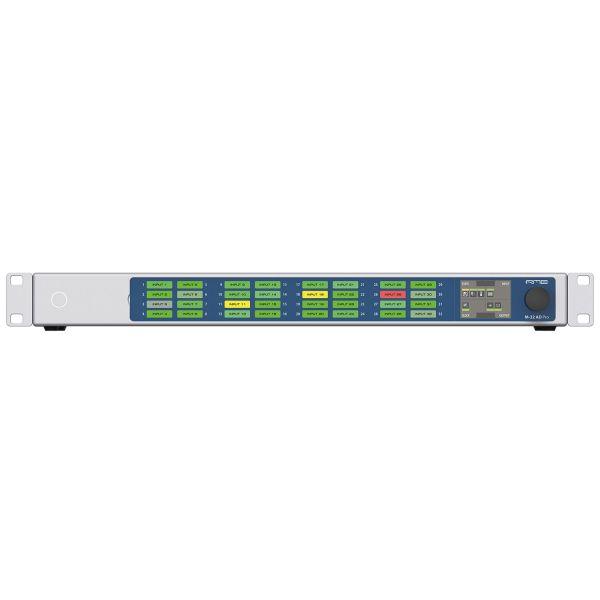 The RME M-32 Pro AD AVB Series Converter is a high-end 32-channel analog to digital converter based on the original M-32. Featuring two fully equipped MADI I/Os with separate signal routing and an AVB interface, the M-32 Pro AD is the ultimate converter for the modern studio.

When RME released the original M-32 series, it quickly became the industry standard due to its high quality, reliability and number of channels. Now the M-32 series is back and better than ever with new and improved features for modern professional studios, immersive sound stages, live sound systems and more.

Capable of converting 32 channels of audio with up to 192 kHz sampling frequency, M-32 Pro series converters deliver a completely linear frequency response all the way down to 0 Hz.

WELCOME TO THE FUTURE

M-32 Pro series converters are equipped with the state-of-the-art technology for seamless studio integration, including two fully equipped MADI I/Os with individual signal routing, as well as an AVB interface. With AVB support, you can transmit up to 32 analog channels at a maximum 192 kHz sampling rate over a single Ethernet cable.

M-32 Pro series converters use the open AVDECC 1722.1 control protocol for compatibility with external controllers, allowing you to control your converters from your computer via the network connection and the integrated USB port.

Please fill out the form below and a Vintage King Audio Consultant will contact you with a ship date for the RME M-32 Pro AD AVB Series Converter.

Have a better price in mind for the RME M-32 Pro AD AVB Series Converter that you've been checking out? We're willing to work on it!Please fill out the form below with your contact information.Once the form is submitted, a Vintage King Audio Consultant will contact you as soon as possible with our best price on this product.