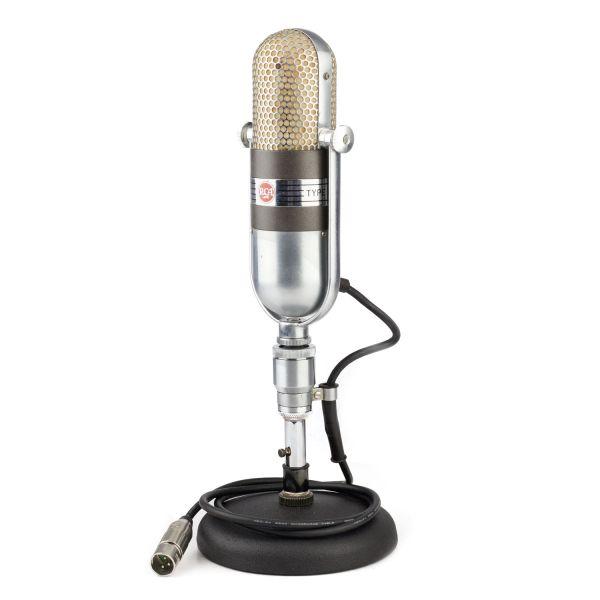 The RCA 77-DX is a classic ribbon microphone. Great on horns, guitars, vocals. Rich lows, silky smooth mids and highs. A must have for every mic locker - from RCA, the inventors of the ribbon mic.

A ribbon mic works by suspending a thin piece of corrugated aluminum, (the 'ribbon'), between two poles of an Alnico magnet. The compression and rarefaction of air vibrates this ribbon in the magnetic field, which creates voltage changes that are run through an output transformer to the external amplifier of your choice. Like a dynamic mic, a ribbon requires no tubes, batteries or power supply of any kind. In the case of the RCA 77-DX , the chassis is built to absorb mechanical shocks, the output transformer is shielded against magnetic fields, and the capsule is resistant to changes in humidity and temperature.

The 77-DX is a high-fidelity ribbon (or "velocity") type mic that was originally designed for both television and broadcast studio use. Two different finishes were offered: umber grey for TV (since it was non-reflective), and a satin chrome version for radio broadcast.

The 77-DX was released in 1955 and produced until 1967. It was advertised as a ‘polydirectional’ mic; what we would call today a multi-pattern microphone. The various polar patterns were created by using a tube connected to a chamber behind the ribbon. By rotating a shutter to close off portions of this chamber, patterns could be created from N for non-directional (chamber fully closed), U for unidirectional, to B for bi-directional aka figure-eight (chamber fully open). At a specific point on this continuum, a cardioid pattern is created.

The 77-DX has a frequency response from 30 Hz to 20 kHz. It is also possible to attenuate the low-frequencies with a screwdriver-operated switch on the bottom of the mic body, marked M (for music), V1, and V2 (for voice). The output impedance can be set to 30, 150 or 250 ohms, providing slightly higher output than the standard model 77-D

The RCA 77 series, which resembles a large pill of the capsule variety, has become THE iconic shape of a microphone, and remains so over 40 years after it was discontinued in 1967. The 77-DX was used in countless radio and TV studios in the 50s and 60s. Though rarely seen by the public, its excellent tone was certainly heard by millions, especially in the case of the most famous broadcaster of the period, Edward R. Murrow.

Please fill out the form below and a Vintage King Audio Consultant will contact you with a ship date for the RCA 77-DX Ribbon Microphone #8274 (Vintage).

Have a better price in mind for the RCA 77-DX Ribbon Microphone #8274 (Vintage) that you've been checking out? We're willing to work on it!Please fill out the form below with your contact information.Once the form is submitted, a Vintage King Audio Consultant will contact you as soon as possible with our best price on this product.