No interest if paid in full within 12 months Learn more
Special Order
Note: This item may not be returnable or could require a restocking fee. Contact one of our Audio Consultants for more details. Due to the special nature of this item, we order each unit fresh from the factory, exclusively for you! Lead times may vary so please chat, call or email for up-to-date inventory status.
+Add to List +Compare 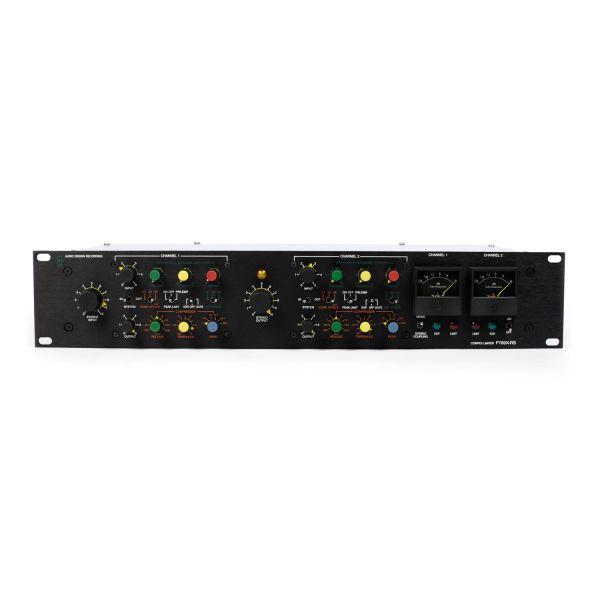 Renowned for decades by top engineers as the quintessential box for larger-than-life drum sounds! The ADR Compex F760X-RS may be the best compressor/limiter available for drum room mics and drum bus duties and is also highly sought-after for the character and punch it adds to guitars along with a myriad of other sources... And now it can be yours!

The ADR Compex F760-RS by Q2 Audio reintroduces, at long last, the venerable and highly sought-after dynamics processor of yesteryear. The unique character and spirit of the Compex can be heard on many classic recordings (think of that huge, commanding drum sound on When the Levee Breaks by Led Zeppelin, for instance). With painstaking attention to detail, Q2 Audio has masterfully reproduced the exact circuit design of the original Compex, with a handful of new features and updated components.

Functionally, the new Compex has all the same features and settings as the original unit, employing the same super-flexible FET-based compression, limiting and gating. Switchable threshold, compression ratio, and attack/release times are available with all the same settings and a stereo link switch is provided for linking the two channels together for operation in stereo. An all-new external side-chain insert has been added to the new Compex, letting you feed the detector circuit of the compressor with an independent sound source. The side-chain insert can be set to control the gate circuit, instead, by simply switching over an internal jumper. The limit section has a switchable 50us "pre-emphasis" setting in addition to the normal “on” position. Pre-emphasis was originally used for limiting high frequencies to prevent over-modulation during broadcast use. Pre-emphasis boosts the high frequencies entering the limiter side-chain, acting as a de-esser causing limiting action on sibilant high frequencies. The compressor side-chain insert is useful for adding an EQ to the side-chain audio signal to create "vocal stresser" type frequency-dependent compression effects or inserting another audio source for “ducking".

Improving upon some of the components and build-quality concerns of the original Compex, a high-quality meter has been employed (replacing the discontinued Sifam™ Director 14 meter) and the original “ABC” cards have been combined to a single PCB to allow for more efficient manufacturing. Also, some slight alterations have been made to the calibration functions to help the unit maintain calibration over a longer period of time. The original potentiometers were an open frame design which became noisy as time wore on, the re-issue has sealed conductive plastic potentiometers to improve the usable life-span.

With a wide range of features and functions, the new ADR Compex by Q2 Audio can meet the needs of any dynamic-processing task, adding a character and flavor all its own. Those familiar with the original Compex will be pleased to see how faithfully recreated this reincarnate really is, with a few enhancements and updates to make one of the best compressor/limiters just that much better.

Word on the Street:

"The F760X-RS is an advanced analog processor that will increase apparent loudness/record audio levels yet provide reliable overload protection. Compex processing is addictive: the more compression/limiting I heaped on revealed the unit's true personality as an aggressive and colorful-sounding FET-based limiter/compressor. After getting used to its quirks, I found its time-proven design along with modern updating made it irresistible. I highly recommend it."

Please fill out the form below and a Vintage King Audio Consultant will contact you with a ship date for the Q2 Audio F760X-RS Compressor with TX Modification.

Have a better price in mind for the Q2 Audio F760X-RS Compressor with TX Modification that you've been checking out? We're willing to work on it!Please fill out the form below with your contact information.Once the form is submitted, a Vintage King Audio Consultant will contact you as soon as possible with our best price on this product.