$ 2,999 .95
Your Savings: $ 640 .00 Msrp: $ 3,639 .95
or $84/month for 36 months 0% interest for 36 months. 36 equal monthly payments required. Learn more
Ships directly from PreSonus
Note: This item may not be returnable or could require a restocking fee. Contact one of our Audio Consultants for more details. This item ships directly to you from the manufacturer. To ensure that the manufacturer currently has stock, please chat, call or email for the latest availability status. 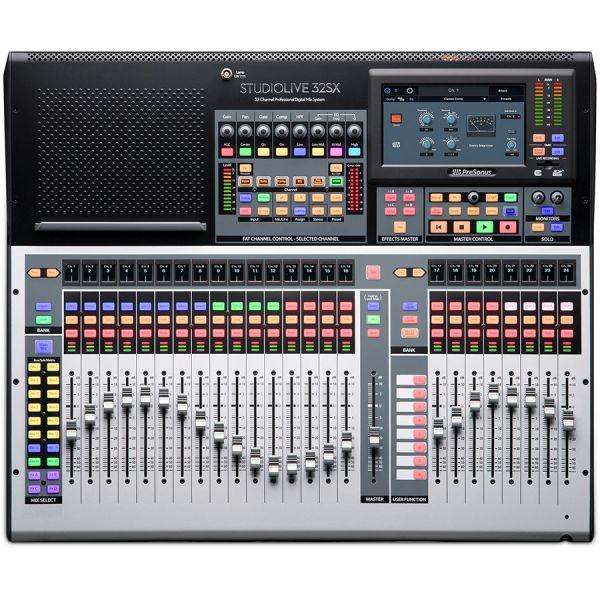 Loaded with the processing power, studio-grade audio quality, and flexible routing options that made StudioLive mixers famous, the PreSonus StudioLive 32SX Series III is the perfect compact 32-channel digital mixing solution. Powered by the dual-core PreSonus FLEX DSP Engine, the StudioLive 32SX digital mixer is equipped with 40 mixing channels, 26 mix buses, and 286 simultaneous processors—including 4 stereo reverberation systems, and Fat Channel plug-in models on every input and mix. The low profile of the StudioLive 32SX makes it an ideal solution for any mixing environment where desk real estate is at a premium. The split-fader workflow lets you manage 32 input channels in two fader layers, while still providing access to your mix outputs on eight additional faders. With 32 XMAX mic preamps and 16 balanced mix outputs, the StudioLive 32SX packs connectivity and power into an efficient use of space.

PreSonus built their reputation designing great-sounding analog circuits for critical studio recording environments, and they put all of that experience into designing the StudioLive 32SX digital mixer. In 1995, PreSonus patented digital control over analog circuits with their first studio product. Building on this legacy, they created a separate digital volume-control circuit ahead of their lauded analog XMAX mic preamp design, providing the convenience of digital recall without sacrificing fidelity. This allows the StudioLive 32SX mic preamps to be remote-controlled with UC Surface software or Studio One®, and when you load a StudioLive 32SX mixer scene, the mic preamp trim values can also be recalled along with the other settings.

Record music with or without a computer

PreSonus Capture® recording software is an intuitive multitrack recording application with a fully integrated Virtual Soundcheck mode that runs directly on your StudioLive 32SX digital mixer or on your Mac® or Windows® computer. Record all 32 channels plus a stereo mix of your choosing via USB, to an SD Card, or both for the ultimate redundant live recording rig. StudioLive mix scenes can be stored with your recordings to speed up virtual soundchecks. Best of all, Capture sessions open natively in Studio One with the entire StudioLive mix scene re-created in the Studio One console, complete with fader levels, Fat Channel settings, mutes, solos, and more. No other multitrack software makes recording as fast, simple and hassle-free so you can focus on mixing the show.

Studio One revolutionized music recording, making common mixing and production tasks as easy as drag-and-drop. Tight integration with StudioLive 32SX digital mixers allows you to control preamp levels and more right from the Studio One software console. Press the DAW button on your StudioLive 32SX, and your Studio One controls are right under your fingertips on your digital mixer. Studio One control can be toggled on and off, allowing you to quickly switch between your live mix and your production mix with the press of a button. Studio One Artist is included with the StudioLive 32SX, so you can start recording right out of the box.

Remote control your digital mixer from anywhere—on any device

PreSonus StudioLive Series III digital mixers are tightly integrated with an entire suite of state-of-the-art software. Mix wirelessly using UC Surface touch-control software for macOS®, Windows, iPad® and Android™. Control your monitor mixes with QMix®-UC for iPhone®, iPod® touch, and Android devices. Whether you’re adjusting monitor mixes on stage, moving around the room to dial in your mix, or using your mobile device as a second screen for your StudioLive 32SX digital mixer, remotely controlling your mix from anywhere just got easier.

Flexible mixing for studio and stage

The StudioLive 32SX was designed to fit well in any application. Its 16 FlexMixes can be individually configured to function as an aux bus, a subgroup, or a matrix mix. Four designated effects buses provide a total of 24 mix buses plus an independent solo bus and the main mix. PreSonus also provided 24 DCAs so you can more easily and flexibly control groups of channels. Inputs and buses can be freely routed internally, out to your AVB network, and over the USB bus, allowing you to customize your StudioLive 32SX for your unique mixing style.

With 128 (64x64) channels of recording over USB, you can record every input channel and bus on your StudioLive 32SX for the ultimate recording rig. Each channel can independently access its analog input or its dedicated digital return from your computer. Ten included vintage EQ and classic compressor Fat Channel plug-in models can be used onboard your mixer as well as within Studio One. And when you’re ready for more signal processing options, PreSonus offers four Fat Channel plug-in collections with 15 additional models. Fat Channel plug-ins can be inserted on every input channel and output bus, giving you extensive, studio-style processing while mixing and recording.

StudioLive Series III networked products form an ecosystem that is easily expanded and quickly configured. Designed to enhance each other, these products are at the forefront of AVB networking technology. Connect to StudioLive Series III rack mixers and add a dedicated monitor mixer. Route audio to EarMix 16M personal monitor mixers for customized mixes on stage. With powerful plug-in processing, advanced recording features, and a full complement of analog I/O in a compact chassis, the StudioLive 32SX is an ideal centerpiece for sound systems of any size.

Please fill out the form below and a Vintage King Audio Consultant will contact you with a ship date for the PreSonus StudioLive 32SX Series III.

Have a better price in mind for the PreSonus StudioLive 32SX Series III that you've been checking out? We're willing to work on it!Please fill out the form below with your contact information.Once the form is submitted, a Vintage King Audio Consultant will contact you as soon as possible with our best price on this product.