$ 49 .95
Your Savings: $ 50 .00 Msrp: $ 99 .95
No interest if paid in full within 36 months Learn more
In Stock - Fastest eDelivery 24/7!
This product is delivered by download. Once your order is complete, you will receive a license code via email within minutes. Note: Software is not returnable, so please call if you need advice about compatibility or version. 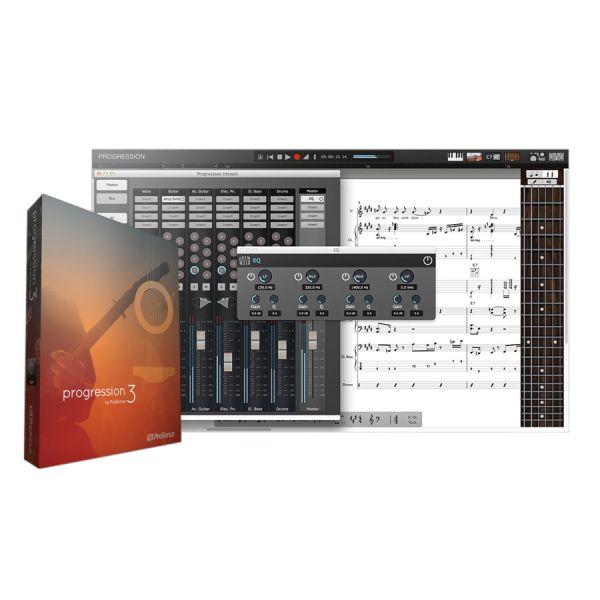 If you compose with guitar, bass, or drums, you need PreSonus Progression 3 for Mac® and Windows®. Enter parts and create guitar and bass tab, drum tab, lead sheets, and standard sheet music with ease. Add audio, apply effects, mix, and hear your composition played back with superb samples by famous artists. Compose on a computer and continue editing with Progression for iPad or vice versa. Progression’s ease of use and great sounds make composing more fun than ever!

The best sound around

For many musicians, Progression’s interactive keyboard, fretboard, and drum pad are the fastest and most convenient way to capture pitches, drum parts, and guitar fingerings. The fretboard can switch from guitar to bass, and you can even customize the number of guitar strings and the order of entry for each voice for the drum pad.

Progression works wherever you do

Progression allows you to compose in tablature or standard notation on your desktop and transfer your composition to your iPad®, where you can continue to edit and play back your music. With Progression and Progression for iPad (a separate purchase), you can create, send, and open scores between Mac®, Windows®, and iPad and can continue to work on your score anywhere, anytime! No matter which platform you use, you get the high-quality playback sounds for which Progression is famous.

Want even more advanced notation features and a larger sound library? PreSonus® Notion™ and Notion for iPad include everything in Progression and Progression for iPad and much more, and they can seamlessly open your Progression files.

Plays well with others

In addition to transferring to and from iPad, Progression offers compatibility with other applications in several ways. Email a Progression file or save and email a PDF of your composition—great for teachers and students. Connect with compatible applications via ReWire. Import and export Standard MIDI Files and MusicXML files, export WAV files, and open Arobas Guitar Pro tablature files (v. 3 to 5). And of course, you can import and export between Progression and Progression for iPad, Notion, and Notion for iPad.

Capture MIDI parts and edit them with your score

Better yet, use the Sequencer Overlay, which allows you to see notation and MIDI performance data on the same staff. Edit each individual note’s velocity, duration, start point, and end point using drag-and-drop. For precise values, double-click each note and enter in the numeric values as well. With this feature, Progression combines the power of the MIDI sequencer with the clarity of standard notation in a unique and powerful way.

Progression offers features you expect in a digital audio workstation, including a built-in mixer with buses, panning, inserts, subgroups, and more. Process your audio with the built-in reverb, guitar-amp simulator, and PreSonus Native Effects EQ, Compressor, and Limiter plug-ins from PreSonus’® Studio One® DAW. Then automatically export audio from individual parts or buses.

Progression 3 makes it easier than ever for you to write your ideas quickly and includes new effects from PreSonus Studio One, an enhanced chord library, and many notation and publishing improvements.

Notation improvements make Progression 3 even faster and easier to use than previous versions, including an enharmonic spelling tool, cross-staff notation, and new shortcut sets. You also get an enhanced chord library with more library chords, user-created chords, and recent-chord recall.

Below are the minimum computer-system requirements for Progression.

Please fill out the form below and a Vintage King Audio Consultant will contact you with a ship date for the PreSonus Progression 3 - Electronic Delivery.

Have a better price in mind for the PreSonus Progression 3 - Electronic Delivery that you've been checking out? We're willing to work on it!Please fill out the form below with your contact information.Once the form is submitted, a Vintage King Audio Consultant will contact you as soon as possible with our best price on this product.