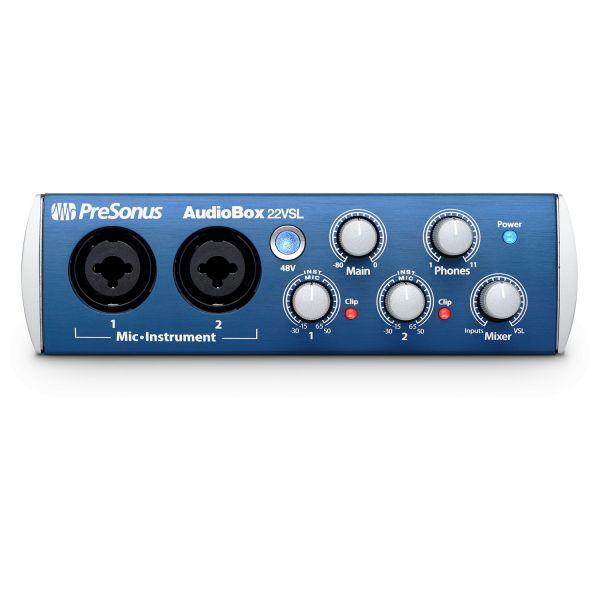 You don’t need to have a million-dollar studio to sell a lot of records. Bruce Springsteen’s Nebraska was recorded in a hotel room. Bon Iver’s For Emma, Forever Ago was tracked at a cabin in the woods. And can you guess where Bob Dylan’s The Basement Tapes was produced? The Presonus AudioBox 22VSL delivers professional-caliber 24-bit, 96 kHz audio quality in a rugged, compact enclosure, allowing you to create your next hit whether your studio is in your home or in your backpack.

The AudioBox 22VSL features the same award-winning Class A XMAX preamps featured in the StudioLive AI mixers, found in recording studios and venues the world over. Record and play back at sampling rates up to 96 kHz, with remarkably low noise. If that’s all geek to you, here’s the simple version: This thing sounds great.

The AudioBox 22VSL’s two front-panel combo mic/instrument inputs make it a great choice for a singer/songwriter or for a couple of guitarists who want to collaborate or jam. A mix control blends the input signal with the computer playback stream for zero-latency monitoring so you can overdub new tracks without hearing annoying delays. With its MIDI I/O, you can connect the AudioBox 22VSL to keyboards, sound modules, and control surfaces. These features make the AudioBox 22VSL a simple, affordable, mobile solution for podcasting, recording sermons, and teaching music, too!

Roadworthy and ready to travel.

Presonus gave the AudioBox 22VSL a heavy-duty steel chassis and metal knobs, so it can take a serious pounding and remain completely reliable. Its screaming-loud headphone output ensures you can hear your music loud and clear, even in noisy locations. And it’s USB bus powered, so you can record with it anywhere you can use a laptop. So drop it in your laptop bag, mount it in a rack, or slap it on a tabletop.

Seamlessly integrated with the included PreSonus Studio One® 3 Artist DAW, the AudioBox 22VSL interface works with virtually all Mac and Windows audio-recording software. Built by creative people for creative music production, Studio One 3 is easy to learn and enables you to compose, record, and produce your masterpiece without getting distracted by the tools. Studio One also enjoys a robust online community of enthusiastic and helpful users you can turn to for advice.

Designed for the studio. Built for the road.

Whether you're just getting into recording or are a veteran producer who wants to go mobile, the AudioBox 22VSL will give you great sound in a bus-powered, rugged chassis that's ready to hit the road when you are. The perfect companion for any recording software, the AudioBox 22VSL comes equipped with Studio One Artist to provide you with a complete recording solution right out of the box.

Please fill out the form below and a Vintage King Audio Consultant will contact you with a ship date for the Presonus AudioBox 22 VSL.

Have a better price in mind for the Presonus AudioBox 22 VSL that you've been checking out? We're willing to work on it!Please fill out the form below with your contact information.Once the form is submitted, a Vintage King Audio Consultant will contact you as soon as possible with our best price on this product.

VIEW
27430
I would like to thank VK for the wonderful sales assistance, service and prices. This was my first purchase with you and it won't be my last. I only wish I'd discovered you years ago!
Matthew R.
I had two Grammy wins this year - Ray LaMontagne & Carolina Chocolate Drops. Both made with help from Vintage King!
Ryan F.
In almost 20 years in Pro audio buying, never did I receive a unit so well packed and exactly as described. Works flawlessly. The whole process has been so smooth. I will never hesitate to do business with you guys in the future and will recommend you to everyone I know.
Martin C.
This was my first experience buying something from Vintage King (although I surf the "used" categories on the website frequently!), and, despite being on the other side of the world, I had absolutely no trouble and everything went very smoothly.
Phil T.
The speed of delivery exceeded my expectations! I was VERY pleased that my shipment arrived in time for a scheduled vocal tracking session. The packing insured that my order arrived safely. And the sales staff responded quickly to questions regarding the product.
James P.
Thank you so much! Vintage King has been so fair and easy to work with. I can't thank you enough. It feels good to trust such a hefty purchase to folks who are so helpful and knowledgeable. Vintage King is a sound designers dream store.
Noa L.
You guys have excellent customer service and I am excited about the next upgrade I complete on my fifth recording facility. I've been in the studio business for forty plus years. The salesman I worked with at Vintage King was the best of the best. You all rock!
Robby T.
I would recommend Vintage King to any one looking for top-class gear, unbeatable customer service and the best prices on the map!
Jake D.
My experience with Vintage King was excellent. The order was here fast considering it was out of stock. The sales person had SKB send it to me directly and I couldn't have been more pleased.
Michael D.
From the minute I placed my order I was kept well-informed through each step in your process. Even though I was buying a comparatively modest piece of gear, your attention to detail made me feel like I was purchasing a six-figure mixing desk.
Thomas W.
I am a new customer of yours. You guys provided me the absolute best deals in ordering all the equipment to power my brand new recording studio. Your customer service is amazing and i will always deal with you from here on out.
Rob M.
Thanks for your great service and getting this out today. You guys really are the Kings!
Alan B.
Better than expected! Truly impeccable service. Your team was professional, knowledgeable, provided speedy delivery above and beyond standard. Vintage King Audio is definitely my go to for all of my audio and information needs.
James O.