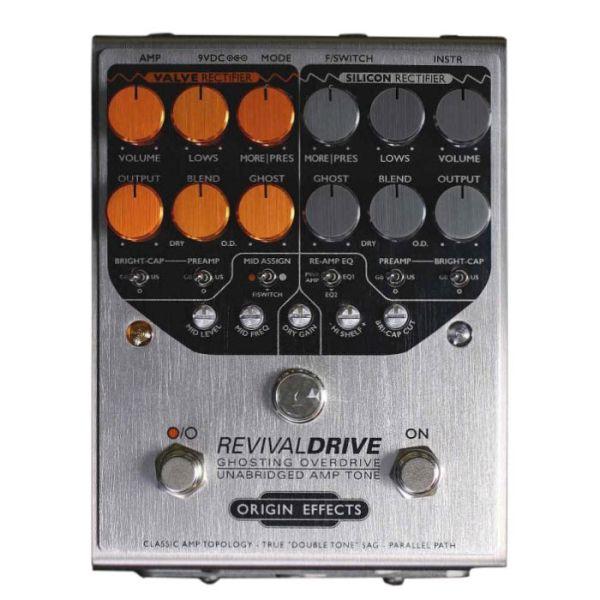 True, old-school overdrive sounds best when coming from non-master-knob tube amps. With this in mind, Origin Effects researched and analyzed the sounds of countless classic valve driven amps when creating the Origin Effects RevivalDRIVE Custom. The RevivalDRIVE features all-analog components, with discrete transistor-based circuitry replacing valves, to recreate each stage from a true valve amp-style signal path. From clean boost to cranked overdrive the RevivalDRIVE is able to replicate the sounds from a wide range of American and British amps. Mid-boost and EQ/filter controls allow you to customize your tone to get the exact overdrive you need.

With the Cali76 compressor, Origin took the sound and response of the legendary Urei 1176 studio compressor and reproduced it in a pedal, following the same analogue circuit topology but adapting the components to work in pedal format. The same approach was applied to the RevivalDRIVE.

Using all-analog components and replacing the valves with discrete transistor-based circuitry, Origin have recreated every stage of the signal path you’d find inside a vintage valve amp. This includes not only the preamp, phase inverter, power amp and rectifier stages, but also a synthesized mains power signal and a speaker-emulating reactive load.

Accurately emulating valve amp circuit behavior is just the start. The RevivalDRIVE’s intuitive controls let you play around with different elements of this circuit, effectively redesigning the amp as you go.

Change the preamp voicing and “bright capacitor” values to explore a range of British and American amp flavors. Rein in the low end for a lean and defined overdrive or push the bass into brutal distortion. Fine-tune the overdrive’s response to your picking dynamics. Goose up your tone with a mid boost, adjusted to just the right frequency, or blend your dry and overdriven signals together.

One pedal, many amps, your tone!

Thanks to its unique design, the RevivalDRIVE is able to recreate aspects of real valve amp behavior never previously captured in a pedal.

Origin have built a range of EQ compensation features into the RevivalDRIVE to make sure it will sound great with whatever amp you’re using – even a flat-response power amp.

With most overdrives, the designers have voiced the pedal to work with their own favorite amp. If you happen to use something different, then you’re out of luck. You’re left with a sound that’s either too harsh or too muddy. Worse still, you can end up sacrificing the clean amp settings you want to use in order to accommodate the overdrive pedal.

With the RevivalDRIVE, there are no compromises.

The RevivalDRIVE is packed with ingenious features and subtle touches designed to aid the player and increase flexibility.

A set of DIP switches at the rear allow you to turn the Valve Rectifier channel into a second Silicon Rectifier channel and toggle the simulated mains power supply between US and GB frequencies, altering the character of the ghost tones produced. When plugging into a flat-response power amp or PA, you can choose to make use of the RevivalDRIVE’s preamp-style tone-shaping even when the overdrive effect is bypassed.

Adding the optional footswitch (sold separately) lets you remotely trigger the fully variable mid boost to punch through the mix or override the Dry/O.D. blend control, instantly switching from a lower gain tone to full throttle.

The last overdrive you’ll need. If you buy it.

For those of you that fear this device is hard to dial in, IT IS!

First, setting the levels is not explained in the manual. Go to TheGearPage.net for a good set of instructions. Second, I found that matching the EQ to my amp was very difficult. I like a bright clean sound, and most ODs sound too fizzy. Even with all the EQ trimpots on the RevivalDrive, I could not entirely dial out brightness and fizz.
What I DO like about this unit: 1. The BLEND control is great for dialing in on-the-verge of breakup sounds. 2. The GHOST control is unique.
Is this worth the price? Maybe. I suspect you could do the same with a good conventional OD, a small foot pedal mixer, a parametric EQ, and a ring modulator for the ghost sounds. Using the mixer, mix the OD with output EQ'd and the bypass, and then mix in ring modulator sounds to taste. That's four pedals, easily bigger and just as expensive as the RevivalDrive I suspect.

It is an honor to own the Origin Effects RevivalDRIVE Custom. There is nothing you can’t do, nowhere you can’t go with this pedal. It made my other overdrive pedals obsolete. I sold them, no remorse. My amps sound better, my guitars sound better.

Please fill out the form below and a Vintage King Audio Consultant will contact you with a ship date for the Origin Effects RevivalDRIVE Custom Overdrive Pedal.

Have a better price in mind for the Origin Effects RevivalDRIVE Custom Overdrive Pedal that you've been checking out? We're willing to work on it!Please fill out the form below with your contact information.Once the form is submitted, a Vintage King Audio Consultant will contact you as soon as possible with our best price on this product.

VIEW
98530
I would like to thank VK for the wonderful sales assistance, service and prices. This was my first purchase with you and it won't be my last. I only wish I'd discovered you years ago!
Matthew R.
I had two Grammy wins this year - Ray LaMontagne & Carolina Chocolate Drops. Both made with help from Vintage King!
Ryan F.
In almost 20 years in Pro audio buying, never did I receive a unit so well packed and exactly as described. Works flawlessly. The whole process has been so smooth. I will never hesitate to do business with you guys in the future and will recommend you to everyone I know.
Martin C.
This was my first experience buying something from Vintage King (although I surf the "used" categories on the website frequently!), and, despite being on the other side of the world, I had absolutely no trouble and everything went very smoothly.
Phil T.
The speed of delivery exceeded my expectations! I was VERY pleased that my shipment arrived in time for a scheduled vocal tracking session. The packing insured that my order arrived safely. And the sales staff responded quickly to questions regarding the product.
James P.
Thank you so much! Vintage King has been so fair and easy to work with. I can't thank you enough. It feels good to trust such a hefty purchase to folks who are so helpful and knowledgeable. Vintage King is a sound designers dream store.
Noa L.
You guys have excellent customer service and I am excited about the next upgrade I complete on my fifth recording facility. I've been in the studio business for forty plus years. The salesman I worked with at Vintage King was the best of the best. You all rock!
Robby T.
I would recommend Vintage King to any one looking for top-class gear, unbeatable customer service and the best prices on the map!
Jake D.
My experience with Vintage King was excellent. The order was here fast considering it was out of stock. The sales person had SKB send it to me directly and I couldn't have been more pleased.
Michael D.
From the minute I placed my order I was kept well-informed through each step in your process. Even though I was buying a comparatively modest piece of gear, your attention to detail made me feel like I was purchasing a six-figure mixing desk.
Thomas W.
I am a new customer of yours. You guys provided me the absolute best deals in ordering all the equipment to power my brand new recording studio. Your customer service is amazing and i will always deal with you from here on out.
Rob M.
Thanks for your great service and getting this out today. You guys really are the Kings!
Alan B.
Better than expected! Truly impeccable service. Your team was professional, knowledgeable, provided speedy delivery above and beyond standard. Vintage King Audio is definitely my go to for all of my audio and information needs.
James O.