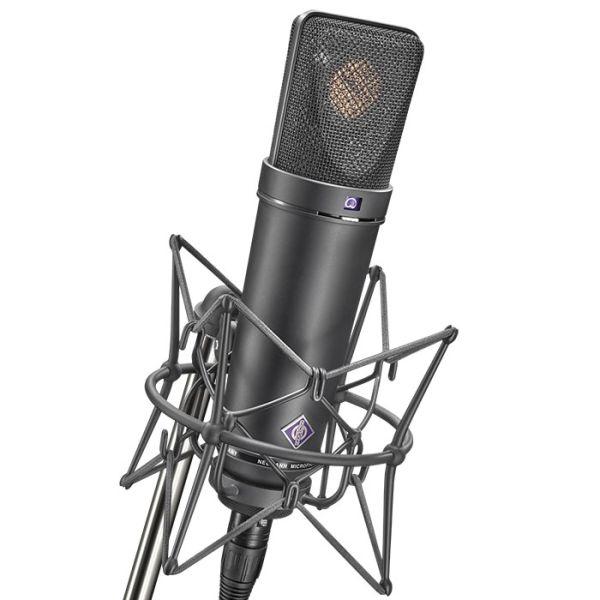 The Neumann U 87 Ai is the gold standard of microphones in modern audio recording. For over 50 years, the U 87 Ai has been used in recording studios all over the world to capture award-winning performances. Adored for its smooth, refined sound, this classic large diaphragm condenser mic will instantly bring any instrument to life. This set includes an EA 87 shock mount.

Introduced in 1967, Neumann’s U 87 has shaped the sound of hundreds of hit records over the last 50 years. To this day, no professional recording studio is complete without a Neumann U 87 Ai. The U 87 Ai is the quintessential large diaphragm condenser microphone. The iconic design and musical sonic character have become the gold standard by which other microphones are measured.

Featuring a balanced frequency response with a unique midrange presence, the U 87 Ai offers a unique, yet instantly recognizable tone. Equipped with selectable omni, cardioid, and figure-8 polar patterns, the U 87 Ai is a versatile studio workhorse that will shine in any situation: from acoustic guitar to drum overheads.

The U 87 was originally created as a solid state version of the legendary U 67 tube condenser microphone from the 1960s. U 87 Ai combines the same K67 dual diaphragm condenser capsule as its tube-based predecessor with innovative FET 80 technology to deliver unparalleled clarity.

The built-in switchable low cut filter makes it easy to combat low frequency build up caused by the proximity effect. The on-board pad and remarkably low self-noise mean you can record even louder performances without any unwanted distortion.

Due to its solid bass response and excellent midrange detail, the U 87 Ai sounds great on bass and guitar cabinets, while the extended top-end makes it he ultimate vocal microphone. Perfect for any genre from pop and jazz to classical music, the U 87 Ai is the world’s most famous studio microphone for a reason.

Build quality and sound is second to none. Great for both recording instruments and vocals.

Please fill out the form below and a Vintage King Audio Consultant will contact you with a ship date for the Neumann U 87 Ai Condenser Mic Set Z - Matte Black.

Have a better price in mind for the Neumann U 87 Ai Condenser Mic Set Z - Matte Black that you've been checking out? We're willing to work on it!Please fill out the form below with your contact information.Once the form is submitted, a Vintage King Audio Consultant will contact you as soon as possible with our best price on this product.