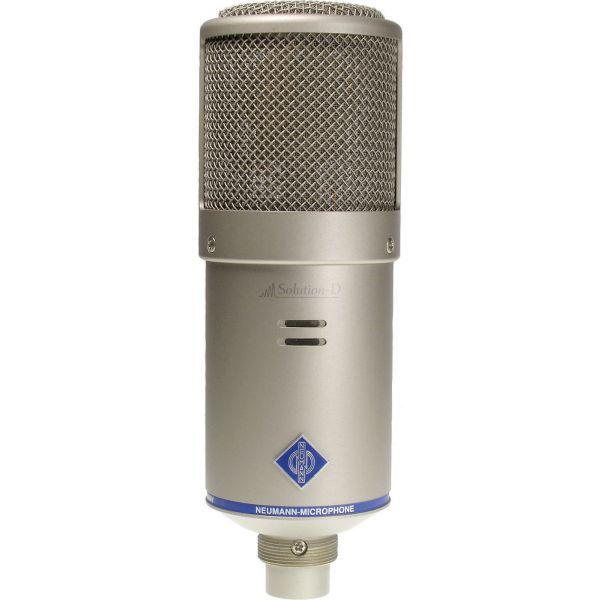 At first glance, the Neumann D-01 appears similar to analog microphones. However, immediately following the capsule is an A/D converter developed by Neumann, which is especially optimized for the signal conditions of the microphone capsule. The signal generated by the capsule is immediately converted into a digital signal, resulting in an internal 28-bit signal with a dynamic range of more than 130 dB (A-weighted, including the microphone capsule).

By means of a field programmable gate array (FPGA), the digital signal is then processed further in the microphone itself. This means that parameters such as the polar pattern, pre-attenuation, low-cut filter, gain and various switching functions can be set digitally and controlled remotely. External components such as analog preamplifiers and A/D converters are thus no longer required.

For identification purposes, the microphone transmits information such as the name of the manufacturer, the model, the serial number and the software version to the receiver.

The microphone is equipped with a 3-pin XLR connector. A bi-directional signal conforming to the AES 42-2001 standard is transmitted, which contains the balanced digital microphone output signal, the phantom power supply and a remote control data stream. This data stream also includes a signal for synchronizing the microphone with a master clock.

The DMI-2 is operated by means of the Neumann Remote Control Software, which runs on a desktop or laptop computer. The computer and the DMI-2 are connected via a USB port and an interface converter (USB to RS 485). If a large number of microphones is used, several DMI-2s can be cascaded, and each interface can be addressed individually.

All important parameters are displayed on the screen and can be changed at any time. During production, the sound engineer has complete control over the status and parameters of all the microphones and can change settings quickly and conveniently if necessary.

Please fill out the form below and a Vintage King Audio Consultant will contact you with a ship date for the Neumann Solution D Set.

Have a better price in mind for the Neumann Solution D Set that you've been checking out? We're willing to work on it!Please fill out the form below with your contact information.Once the form is submitted, a Vintage King Audio Consultant will contact you as soon as possible with our best price on this product.