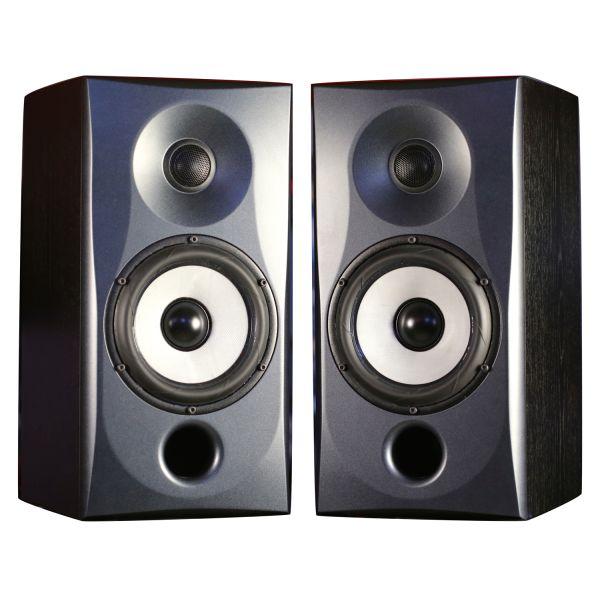 The Modern Audio MAD-Max brings a new level of performance to active near-field monitors. Starting from the ground up allowed Modern Audio Designs to design the features they believed would make the MAD-Max superior to anything else you've heard before.

The cabinet is constructed from differing thicknesses of high grade MDF and heavily damped with bituminous panels to reduce cabinet resonances while the front baffle is contoured to reduce reflections. The exponential tweeter loading provides a high sound pressure level gain in the lower high frequency range, which discharges the tweeter. In addition, the focus and the coupling to the bass driver are improved, as a result of the sound generation planes move closer together.

"Like most other producer/engineer/mixers, I NEVER stop checking out the competition while in search of the best gear possible. I have NEVER, EVER heard a self-powered monitor that I could ever totally relax with, trust or enjoy. I have listened to literally hundreds of setups in the 22+ years I have worked on my beloved system and have never heard ANYTHING meet or beat it.

Seven years into the project, Richard Gerberg and Graeme Bridge (of Modern Audio Design) asked me if they could come up to my studio and audition these MAD MAX Monitors in a professional working environment. We began by A/B testing multiple genres of music from numerous projects over the years with which I am intimately familiar.

It was immediately apparent that they were really on to something this time! The extended width and height were immediately apparent to me as was a beautiful clarity and extension into the deep and warm bass as well as the icing zone of the uppermost frequencies. The build of these speakers is TRULY impressive. Great quality inside and out. Their brand new and custom designed drivers and paper thin cone material are things of beauty!

All I can say is, without hesitation or reservation of any sort, these are the ONLY self-powered, near-field monitors in existence that I would happily record and mix on! These MAD MAX speakers are a real testament to inspiration, belief in self and unwavering commitment to a specific goal from both Graeme and Richard. I commend them highly for their efforts and can say no more than the truth I have heard with my very own ears."

Please fill out the form below and a Vintage King Audio Consultant will contact you with a ship date for the Modern Audio MAD-Max - Pair - Black Ash.

Have a better price in mind for the Modern Audio MAD-Max - Pair - Black Ash that you've been checking out? We're willing to work on it!Please fill out the form below with your contact information.Once the form is submitted, a Vintage King Audio Consultant will contact you as soon as possible with our best price on this product.

VIEW
39619
I would like to thank VK for the wonderful sales assistance, service and prices. This was my first purchase with you and it won't be my last. I only wish I'd discovered you years ago!
Matthew R.
I had two Grammy wins this year - Ray LaMontagne & Carolina Chocolate Drops. Both made with help from Vintage King!
Ryan F.
In almost 20 years in Pro audio buying, never did I receive a unit so well packed and exactly as described. Works flawlessly. The whole process has been so smooth. I will never hesitate to do business with you guys in the future and will recommend you to everyone I know.
Martin C.
This was my first experience buying something from Vintage King (although I surf the "used" categories on the website frequently!), and, despite being on the other side of the world, I had absolutely no trouble and everything went very smoothly.
Phil T.
The speed of delivery exceeded my expectations! I was VERY pleased that my shipment arrived in time for a scheduled vocal tracking session. The packing insured that my order arrived safely. And the sales staff responded quickly to questions regarding the product.
James P.
Thank you so much! Vintage King has been so fair and easy to work with. I can't thank you enough. It feels good to trust such a hefty purchase to folks who are so helpful and knowledgeable. Vintage King is a sound designers dream store.
Noa L.
You guys have excellent customer service and I am excited about the next upgrade I complete on my fifth recording facility. I've been in the studio business for forty plus years. The salesman I worked with at Vintage King was the best of the best. You all rock!
Robby T.
I would recommend Vintage King to any one looking for top-class gear, unbeatable customer service and the best prices on the map!
Jake D.
My experience with Vintage King was excellent. The order was here fast considering it was out of stock. The sales person had SKB send it to me directly and I couldn't have been more pleased.
Michael D.
From the minute I placed my order I was kept well-informed through each step in your process. Even though I was buying a comparatively modest piece of gear, your attention to detail made me feel like I was purchasing a six-figure mixing desk.
Thomas W.
I am a new customer of yours. You guys provided me the absolute best deals in ordering all the equipment to power my brand new recording studio. Your customer service is amazing and i will always deal with you from here on out.
Rob M.
Thanks for your great service and getting this out today. You guys really are the Kings!
Alan B.
Better than expected! Truly impeccable service. Your team was professional, knowledgeable, provided speedy delivery above and beyond standard. Vintage King Audio is definitely my go to for all of my audio and information needs.
James O.