$ 2,977 .99
Your Savings: $ 331 .01 Msrp: $ 3,309 .00
or $125/month for 24 months 0% interest for 24 months. 24 equal monthly payments required. Learn more
PayPal Credit, Express Checkout and Pay in 4 available.
Ships directly from Millennia Media
Note: This item may not be returnable or could require a restocking fee. Contact one of our Audio Consultants for more details. This item ships directly to you from the manufacturer. To ensure that the manufacturer currently has stock, please chat, call or email for the latest availability status. 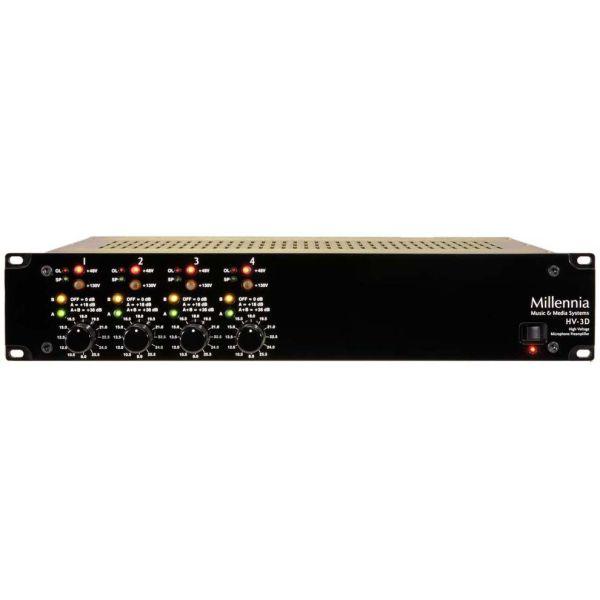 This might be music's purest preamp. It's no wonder the iconic "HV-3" first dazzled engineers who worked with classical and acoustic music, where each and every single detail matters. But, more and more engineers from all genres have discovered the magic of the HV-3's musically transparent circuitry. The fact is, you can never "undo" the color your microphone preamplifier adds. In contrast to preamps that lay on lots of color, the Millennia HV-3 is meticulously crafted to give you the full, authentic voice of your microphone. That way, you're not committed from the start, and you can easily sculpt your sound later with the exact character you want. Hear the details today with the Millennia HV-3D-4.

Pure, musical, incredibly smooth preamplifier
The HV-3 is there, but it's not there. And that's exactly how you want it. Built to offer the most transparent path from your microphone to the rest of your signal chain, the HV-3 features a transformerless input, balanced audio path, and minimal amplifier design. Aficionados of classical and acoustic-based music may have first discovered the promise of the HV-3's honest approach to preamplification, but the preamp is rapidly making its way into studios of all genres. Once you've heard it, you'll realize that no color is a color, too. What you give the HV-3, you get.

Preserves your sound for later processing
Much of our gear is soaked with character and personality. It's easy to overdo it. The Millennia HV-3 is ideal for the engineer who wants to try on color, without committing to one sound from the start. When you've recorded with the HV-3, you know you're starting from square one, so you can precisely dial in the tone, flavor, and character you want from your outboard gear or plug-in processors. To put it another way, if you were deciding what sculpture to make, you'd most likely want to start with an unchiseled piece of stone. The HV-3 translates the sound of the performance and the voice of your microphone, without getting in the way.

Known to save you time with EQ
When you're used to processing colored audio from the start, working with an HV-3 preamplifier will be a change. But, it's an easy workflow to get into. In particular, engineers who have used the HV-3 often note that tracks are somehow easier to EQ. With the right mic, in the right place, the HV-3 delivers a smooth, natural response that seems to require less tinkering. Without the heavy hand of a preamp, tracks seem to fall together into place.

Millennia gear is made for detail
Founder and chief designer John LaGrou takes the same approach to his exceptional audio gear as he does to the wine he cultivates in the California countryside. Detail matters, it's everything. Whether in a vintage of wine or your multi-track mix, taken together, those details can make a major difference in the end result. Millennia equipment celebrates those fine, subtle points, bringing you gear that's built with uncompromising quality to deliver purity in music.

Please fill out the form below and a Vintage King Audio Consultant will contact you with a ship date for the Millennia HV-3D-4 Four-Channel Microphone Preamp.

Have a better price in mind for the Millennia HV-3D-4 Four-Channel Microphone Preamp that you've been checking out? We're willing to work on it!Please fill out the form below with your contact information.Once the form is submitted, a Vintage King Audio Consultant will contact you as soon as possible with our best price on this product.