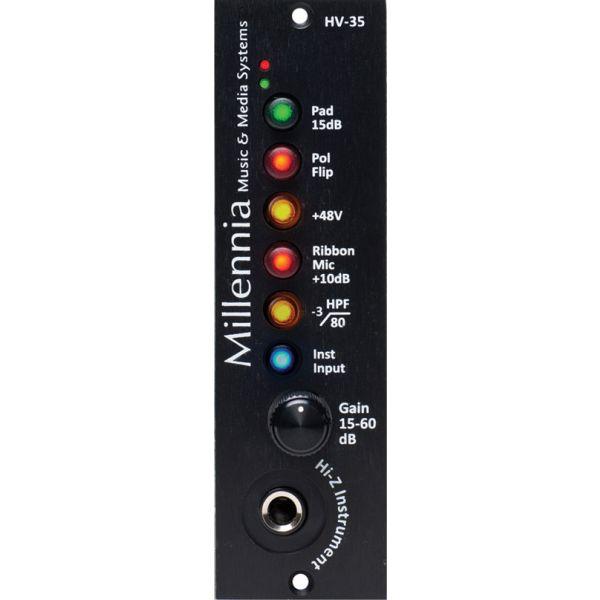 This might be music's purest preamp. It's no wonder the iconic "HV-3" first dazzled engineers who worked with classical and acoustic music, where each and every single detail matters. But, more and more engineers from all genres have discovered the magic of the HV-3's musically transparent circuitry. The fact is, you can never "undo" the color your microphone preamplifier adds. In contrast to preamps that lay on lots of color, the Millennia HV-3 is meticulously crafted to give you the full, authentic voice of your microphone. That way, you're not committed from the start, and you can easily sculpt your sound later with the exact character you want. Hear the detail today with the Millennia HV-3.

It's here, the iconic HV-3 topology in a format perfect for your 500 Series rack. While Millennia was reworking the HV-3 to fit the form factor, they went ahead and incorporated all the push buttons that HV-3 fans had been asking for over the years. The easy-access buttons include a 15dB pad, a polarity flip, 48V phantom power, a 10dB switch for ribbon mics, a highpass filter, and switch for the front-panel hi-Z instrument input.

The HV-3 is there, but it's not there. And that's exactly how you want it. Built to offer the most transparent path from your microphone to the rest of your signal chain, the HV-3 features a transformerless input, balanced audio path, and minimal amplifier design. Aficionados of classical and acoustic-based music may have first discovered the promise of the HV-3's honest approach to preamplification, but the preamp is rapidly making its way into studios of all genres. Once you've heard it, you'll realize that no color is a color, too. What you give the HV-3, you get.

Preserves your sound for later processing

Much of our gear is soaked with character and personality. It's easy to overdo it. The Millennia HV-3 is ideal for the engineer who wants to try on color, without committing to one sound from the start. When you've recorded with the HV-3, you know you're starting from square one, so you can precisely dial in the tone, flavor, and character you want from your outboard gear or plug-in processors. To put it another way, if you were deciding what sculpture to make, you'd most likely want to start with an unchiseled piece of stone. The HV-3 translates the sound of the performance and the voice of your microphone, without getting in the way.

Known to save you time with EQ

When you're used to processing colored audio from the start, working with an HV-3 preamplifier will be a change. But, it's an easy workflow to get into. In particular, engineers who have used the HV-3 often note that tracks are somehow easier to EQ. With the right mic, in the right place, the HV-3 delivers a smooth, natural response that seems to require less tinkering. Without the heavy hand of a preamp, tracks seem to fall together into place.

Millennia gear is made for detail

Founder and chief designer John LaGrou takes the same approach to his exceptional audio gear as he does to the wine he cultivates in the California countryside. Detail matters, it's everything. Whether in a vintage of wine or your multi-track mix, taken together, those details can make a major difference in the end result. Millennia equipment celebrates those fine, subtle points, bringing you gear that's built with uncompromising quality to deliver purity in music.

Please fill out the form below and a Vintage King Audio Consultant will contact you with a ship date for the Millennia HV-35 (Demo Deal).

Have a better price in mind for the Millennia HV-35 (Demo Deal) that you've been checking out? We're willing to work on it!Please fill out the form below with your contact information.Once the form is submitted, a Vintage King Audio Consultant will contact you as soon as possible with our best price on this product.

VIEW
18893
I would like to thank VK for the wonderful sales assistance, service and prices. This was my first purchase with you and it won't be my last. I only wish I'd discovered you years ago!
Matthew R.
I had two Grammy wins this year - Ray LaMontagne & Carolina Chocolate Drops. Both made with help from Vintage King!
Ryan F.
In almost 20 years in Pro audio buying, never did I receive a unit so well packed and exactly as described. Works flawlessly. The whole process has been so smooth. I will never hesitate to do business with you guys in the future and will recommend you to everyone I know.
Martin C.
This was my first experience buying something from Vintage King (although I surf the "used" categories on the website frequently!), and, despite being on the other side of the world, I had absolutely no trouble and everything went very smoothly.
Phil T.
The speed of delivery exceeded my expectations! I was VERY pleased that my shipment arrived in time for a scheduled vocal tracking session. The packing insured that my order arrived safely. And the sales staff responded quickly to questions regarding the product.
James P.
Thank you so much! Vintage King has been so fair and easy to work with. I can't thank you enough. It feels good to trust such a hefty purchase to folks who are so helpful and knowledgeable. Vintage King is a sound designers dream store.
Noa L.
You guys have excellent customer service and I am excited about the next upgrade I complete on my fifth recording facility. I've been in the studio business for forty plus years. The salesman I worked with at Vintage King was the best of the best. You all rock!
Robby T.
I would recommend Vintage King to any one looking for top-class gear, unbeatable customer service and the best prices on the map!
Jake D.
My experience with Vintage King was excellent. The order was here fast considering it was out of stock. The sales person had SKB send it to me directly and I couldn't have been more pleased.
Michael D.
From the minute I placed my order I was kept well-informed through each step in your process. Even though I was buying a comparatively modest piece of gear, your attention to detail made me feel like I was purchasing a six-figure mixing desk.
Thomas W.
I am a new customer of yours. You guys provided me the absolute best deals in ordering all the equipment to power my brand new recording studio. Your customer service is amazing and i will always deal with you from here on out.
Rob M.
Thanks for your great service and getting this out today. You guys really are the Kings!
Alan B.
Better than expected! Truly impeccable service. Your team was professional, knowledgeable, provided speedy delivery above and beyond standard. Vintage King Audio is definitely my go to for all of my audio and information needs.
James O.