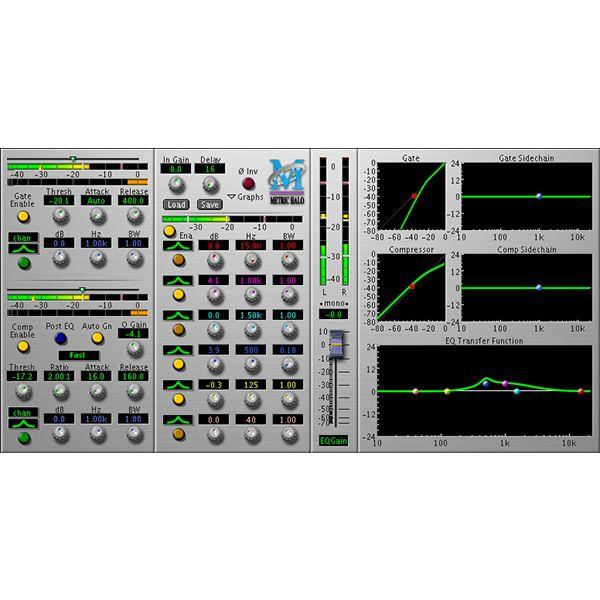 ChannelStrip from Metric Halo is a multi-processor plug-in developed to provide the sound and feel of an analog mixing console. It offers high audio quality, DSP and CPU efficiency, and a comprehensive user interface that allows users to work with a Digital Audio Workstations as efficiently and interactively as they would with a dedicated mixing console.

The plug-in features eight bands of EQ, six main and two for use on the dynamics-section sidechain. The six parametric bands of the EQ are capable of deep notches and steep resonant peaks. Uses include finding "space" for individual instruments within a mix, or for re-tuning drums after they have been recorded.

The dynamics section of the ChannelStrip includes both an expander/gate and a separate compressor. The expander/gate is most useful when working with microphone-recorded sources. It provides an automatic gain-riding feature that mutes the input or track when the audio level is too low, as in the case of a noisy guitar amplifier, for example.

A delay function allows for time-aligning tracks that are part of a multi-microphone recording. In designing the plug-in, emphasis was placed on maintaining pristine sound with low CPU overhead, along with providing a user friendly interface for impoved workflow.

Please fill out the form below and a Vintage King Audio Consultant will contact you with a ship date for the Metric Halo ChannelStrip For GarageBand - Electronic Delivery.

Have a better price in mind for the Metric Halo ChannelStrip For GarageBand - Electronic Delivery that you've been checking out? We're willing to work on it!Please fill out the form below with your contact information.Once the form is submitted, a Vintage King Audio Consultant will contact you as soon as possible with our best price on this product.