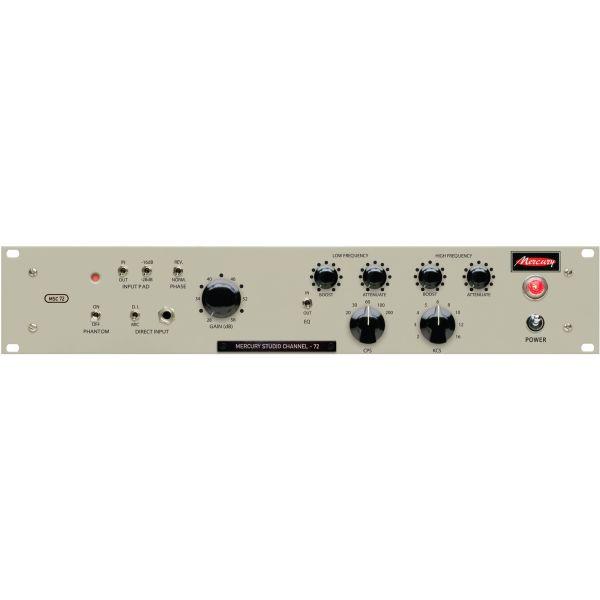 The M72s is based on the most sought after vintage "V series" module, the ‘Telefunken/Siemens V72s,’ which is famous for being used in REDD.37 consoles used on the early Beatle recordings by George Martin at Abbey Road Studios in London, England.

Unlike those vintage modules that had a fixed 34dB gain, the gain of the Mercury M72s is variable from 28dB to 58dB, in 3dB increments. In addition, it offers a selectable Input Pad of -16dB or -28dB for even more control. When the -28dB pad is engaged and is set at the lowest gain setting (28dB) you can run line level signal through the M72s to add warmth and tonality to any track, mix, keyboard, drum machine, sample etc.  Also included are Phantom Power (on/off), Phase (Polarity) Reversal, and F.D.I. (FET Direct Input) Circuit.

The Mercury FDI (FET Direct Input) is a proprietary J-Fet circuit, based on a class-A tube topology. The Mercury FDI is designed to reproduce every nuance of a direct recording, while the circuit lets the tube or solid-state character of the amplifier determine the overall tone. The instrument DI signal is sent through the entire microphone preamp circuitry, including Mercury’s custom, massive input transformers, so that the individual character of each preamp comes through.

The Mercury M72s has rich lows and punchy mids, giving you instant vocal tone, assisting with realistic acoustic guitar tone, and adding punch to bass guitar. The Mercury M72s Studio Microphone Amplifier has that "vintage" tone and "break up" like the original circuit but it is a bit more musical over all.

The MSC-72 Equalizer
The Mercury EQ-H1 features a passive EQ circuit with a single ended gain makeup amplifier topology, based on the vintage ‘Pultec EQH’ circuit. The Mercury EQH2 circuit provides a musically satisfying result unobtainable with active and parametric EQs, since the EQH2 does not rely upon negative feedback (and all its associated phase and dynamic distortions) to achieve equalization. The EQH2, like all Mercury products, has transformer balanced (XLR) input and outputs. The only additions or changes to the original are a much more powerful and stable power supply and running DC on the heaters, rather than AC.

EQH2 vs EQP2
Simply, the key to the tone of these two circuits is it’s amplifier, and Mercury EQ-H2 and EQ-P2 have different amplifiers to make up the gain lost by the passive equalizer circuit, thus it has a different tone, meaning the EQH2 and EQP2 sound different on the same application, and have a different reaction to the same instrumentation or voice.

The EQH2, like the mono version EQ-H1, is more punchy and robust and has a slight push in the low end and lower midrange. The EQP2, like the mono version EQ-P1, is more open and silky, and equally adds warm to highs, mids and lows of your source. Although both sound amazing on any application and are both multi-purpose tools (equalizers) in the studio, if you had both you could then choose between applications. The Mercury EQH2 is warm and fluid but a bit "thicker" than the EQP2, thus shines on thickening (and pushing forward in the mix) your Vocals, Bass, Kick, Snare, and Acoustic Guitar etc. The Mercury EQP2 is great for Shaping and adding ‘air’ to your vocals, Acoustic instruments, Guitar, Piano etc... and is magical strapped across your two buss to add musicality to you mix. The Mercury EQ-H1 and EQ-P1 are based on the original Pultec equalizers which were tools developed to deal with the limitations of recorded music, limitations that most often manifest themselves in the highest and lowest frequencies of the program material. The family of Pultec EQs were originally designed to bring back the life and musicality lost in the recording. Whether by accident or genius, nothing has been able to do it better. The interaction of the passive boosting and attenuating shelving EQs (not relying on negative feedback), as well as the transformers, tubes and other amplification circuitry all add to the incredibly musical character of the product. Working engineers try other types of equalizers, but always end up coming back to the Pultec style as the equalizer of choice for those final touches while tracking or mixing and even mastering.

Please fill out the form below and a Vintage King Audio Consultant will contact you with a ship date for the Mercury MSC-72 Studio Channel 72.

Have a better price in mind for the Mercury MSC-72 Studio Channel 72 that you've been checking out? We're willing to work on it!Please fill out the form below with your contact information.Once the form is submitted, a Vintage King Audio Consultant will contact you as soon as possible with our best price on this product.

VIEW
17150
I would like to thank VK for the wonderful sales assistance, service and prices. This was my first purchase with you and it won't be my last. I only wish I'd discovered you years ago!
Matthew R.
I had two Grammy wins this year - Ray LaMontagne & Carolina Chocolate Drops. Both made with help from Vintage King!
Ryan F.
In almost 20 years in Pro audio buying, never did I receive a unit so well packed and exactly as described. Works flawlessly. The whole process has been so smooth. I will never hesitate to do business with you guys in the future and will recommend you to everyone I know.
Martin C.
This was my first experience buying something from Vintage King (although I surf the "used" categories on the website frequently!), and, despite being on the other side of the world, I had absolutely no trouble and everything went very smoothly.
Phil T.
The speed of delivery exceeded my expectations! I was VERY pleased that my shipment arrived in time for a scheduled vocal tracking session. The packing insured that my order arrived safely. And the sales staff responded quickly to questions regarding the product.
James P.
Thank you so much! Vintage King has been so fair and easy to work with. I can't thank you enough. It feels good to trust such a hefty purchase to folks who are so helpful and knowledgeable. Vintage King is a sound designers dream store.
Noa L.
You guys have excellent customer service and I am excited about the next upgrade I complete on my fifth recording facility. I've been in the studio business for forty plus years. The salesman I worked with at Vintage King was the best of the best. You all rock!
Robby T.
I would recommend Vintage King to any one looking for top-class gear, unbeatable customer service and the best prices on the map!
Jake D.
My experience with Vintage King was excellent. The order was here fast considering it was out of stock. The sales person had SKB send it to me directly and I couldn't have been more pleased.
Michael D.
From the minute I placed my order I was kept well-informed through each step in your process. Even though I was buying a comparatively modest piece of gear, your attention to detail made me feel like I was purchasing a six-figure mixing desk.
Thomas W.
I am a new customer of yours. You guys provided me the absolute best deals in ordering all the equipment to power my brand new recording studio. Your customer service is amazing and i will always deal with you from here on out.
Rob M.
Thanks for your great service and getting this out today. You guys really are the Kings!
Alan B.
Better than expected! Truly impeccable service. Your team was professional, knowledgeable, provided speedy delivery above and beyond standard. Vintage King Audio is definitely my go to for all of my audio and information needs.
James O.