$ 4,599 .00
or $128/month for 36 months 0% interest for 36 months. 36 equal monthly payments required. Learn more
More On Order
This product is in high demand and we are shipping as many orders as we can. Place your order today to be included in the earliest possible shipment. Order now and we'll ship when in stock from one of our three fulfillment centers. 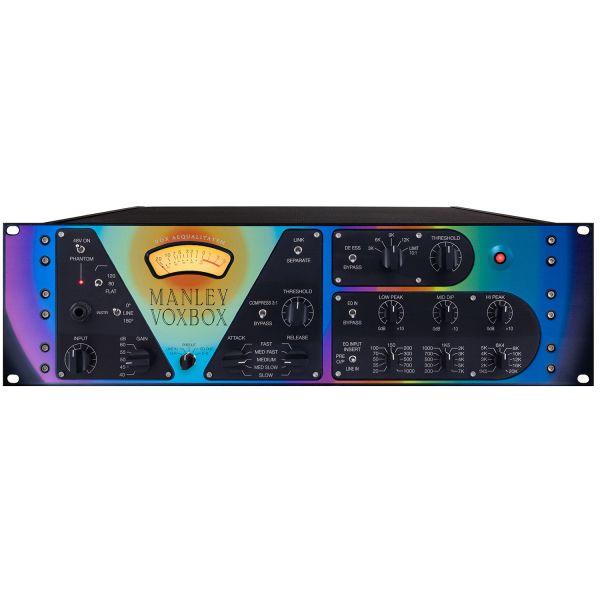 In celebration of LGBT Pride Month 2021, Manley Labs is extremely liberated to announce the VOXBOX 2021 PRIDE EDITION: a special version of their classic best-selling VOXBOX Reference Channel Strip with rainbow cosmetics. Manley Labs believe in equality for all human beings regardless of gender, race, or sexual orientation, and thus will be donating proceeds from sales of this unit to the Human Rights Campaign.

“In the spirit of social inclusion and recognition of our desire for the supportive embrace of all people, I invite everyone to help celebrate Gay Pride Month 2021 with us. May unification, peace, and calm be eventually restored to our planet with love, appreciation, and understanding for all of our fellow humans.”

The Manley Labs VOXBOX is an all-tube channel strip that may well be your "last stop" voice processor, but it's also set to make the most out of virtually any source you throw its way. The VOXBOX shares its fully-featured microphone preamplifier design with Manley's acclaimed Mono Microphone Preamplifier, offering a whole lot of headroom and Class A vacuum tube tone. What's more, the smooth compressor section is a perfect blend of Manley's best-selling Variable MU and the opto-design of their ELOP. All of these features, in addition to a flexible Pultec-style mid-frequency equalizer, de-esser/limiter section, and stereo link function, make the VOXBOX a true sonic studio workhorse.

The preamplifier is a clone of a highly regarded and popular mic pre: the Manley Mono Microphone Preamplifier! The mic input transformer is Manley's own design wound in-house at the Manley Labs factory. High current 48V Phantom power is switchable from the front panel. A simple and effective passive BASS CUT switch kills rumble and reduces popping. The INPUT ATTENUATOR is a variable pad control situated before the first tube stage allowing the preamplifier to accommodate +4 line level signals via the balanced LINE INPUT and instruments via the front panel 1/4" DIRECT INPUT. These inputs are selected in the middle position of the dual-function phase invert switch. We provide both transformer balanced XLR output as well as a transformerless "audiophile" 1/4" phone jack output. The Gain switch is actually a clever variable feedback control that changes not only the gain but the slew rate and flavor of the circuit. With it you can choose how laid back and mellow or how up-front and aggressive you want it to get. See "Notes on Variable Feedback" for more info. Headroom is a strong point in this circuit, +31 dBu capable. This is 5 to 10 dB better than almost all other pro gear. The music passes through only the super-clean pure Class A vacuum tube circuitry. There are obvious advantages to this purist approach and foremost is the un-electronic final sound that carries emotion into the digital realm.

This cool compressor design takes Manley's opto-isolator approach of the Manley ELOP Limiter to the max. We adjusted the Ratio down to 3:1 to turn the ELOP into a compressor and added ATTACK and RELEASE controls for more versatility. What is clever is how the signal is compressed before it hits the tubes with no detrimental effect on distortion or frequency response. This way, it can prevent mic-pre clipping and eliminate whole stages of electronics. This cuts the typical path of mic to tape in half! We also pioneered new thinking in the sidechain by using up to four different time constants simultaneously and controlling them with familiar simple attack, release and threshold controls. This approach is called "Parametric Compression." Manley developed optimum settings or presets based on their favorite Vactrols that we use in our own fast ELOP Limiter, the quick LA-2A's T-4 module, the slower LA-3A and then created more complex special settings. This extended range and method of timing delivers fresh sounds from powerhouse punching drums to super-solid bass yet can also emulate the way good engineers delicately ride a fader while recording. It is transparent and liquid-smooth on vocals, easy to use and accurate. Also rare for an opto-based dynamic processor, this compressor works great on mixes. Of course, you'll be needing two VOXBOXes linked in stereo...

Lots of folks requested that we include the Pultec Mid Frequency Equalizer in the VOXBOX, but they wanted MORE.... Now we've extended it to 33 frequencies in 3 bands with 6 new frequencies from 20 Hz to 150 Hz, and 6 more in the highs from 6.4 KHz to 20 KHz. Ever notice that only EQs with real inductors have the bottom end magic or that only Class A circuitry can keep the top end sweet? This is for you. The EQ INPUT switch patches in the Line Input, Preamp Output, or the INSERT return. This switch serves double-duty acting as a bypass switch for the preamp and/or external processors or for processing two different tracks.

Designed by folks with admittedly large gaps between their two front teeth, the VOXBOX combo also includes a de-esser & peak limiter based on the original ELOP Limiter design but with an added passive LC network to handle the de-essing four carefully chosen notch frequencies from 3KHz to 12KHz. (That 3 kHz setting really tames those annoying frequencies!) The fifth position gives you a limiter which totally mimics the famous LA-2A. This means you can both compress pre-EQ then limit here post-EQ. Another cool feature is the ability to insert this de-esser silently and smoothly as the music plays, using it as needed.

The METER is a full size illuminated Sifam VU meter. A five-position switch shows three audio levels: the line input, the preamp output and the final output. It also shows compressor gain reduction and the de-esser/limiter action. Other clever innovations incorporated into the VOXBOX combo include warm-up muting circuitry, extensive magnetic field containment, 'smart -grounding', and silent switching. The sum-total is more than the separate parts: consider the reduced patching, the short path to tape and you having this much immediate control. As engineers, we choose what we use not based entirely on features and functions - there is a sound, a texture we reach for and the VOXBOX combo puts the 'Manley Sound' together with 'Your Sound'.

Please fill out the form below and a Vintage King Audio Consultant will contact you with a ship date for the Manley VOXBOX 2021 PRIDE Edition Tube Channel Strip.

Have a better price in mind for the Manley VOXBOX 2021 PRIDE Edition Tube Channel Strip that you've been checking out? We're willing to work on it!Please fill out the form below with your contact information.Once the form is submitted, a Vintage King Audio Consultant will contact you as soon as possible with our best price on this product.

VIEW
157383
I would like to thank VK for the wonderful sales assistance, service and prices. This was my first purchase with you and it won't be my last. I only wish I'd discovered you years ago!
Matthew R.
I had two Grammy wins this year - Ray LaMontagne & Carolina Chocolate Drops. Both made with help from Vintage King!
Ryan F.
In almost 20 years in Pro audio buying, never did I receive a unit so well packed and exactly as described. Works flawlessly. The whole process has been so smooth. I will never hesitate to do business with you guys in the future and will recommend you to everyone I know.
Martin C.
This was my first experience buying something from Vintage King (although I surf the "used" categories on the website frequently!), and, despite being on the other side of the world, I had absolutely no trouble and everything went very smoothly.
Phil T.
The speed of delivery exceeded my expectations! I was VERY pleased that my shipment arrived in time for a scheduled vocal tracking session. The packing insured that my order arrived safely. And the sales staff responded quickly to questions regarding the product.
James P.
Thank you so much! Vintage King has been so fair and easy to work with. I can't thank you enough. It feels good to trust such a hefty purchase to folks who are so helpful and knowledgeable. Vintage King is a sound designers dream store.
Noa L.
You guys have excellent customer service and I am excited about the next upgrade I complete on my fifth recording facility. I've been in the studio business for forty plus years. The salesman I worked with at Vintage King was the best of the best. You all rock!
Robby T.
I would recommend Vintage King to any one looking for top-class gear, unbeatable customer service and the best prices on the map!
Jake D.
My experience with Vintage King was excellent. The order was here fast considering it was out of stock. The sales person had SKB send it to me directly and I couldn't have been more pleased.
Michael D.
From the minute I placed my order I was kept well-informed through each step in your process. Even though I was buying a comparatively modest piece of gear, your attention to detail made me feel like I was purchasing a six-figure mixing desk.
Thomas W.
I am a new customer of yours. You guys provided me the absolute best deals in ordering all the equipment to power my brand new recording studio. Your customer service is amazing and i will always deal with you from here on out.
Rob M.
Thanks for your great service and getting this out today. You guys really are the Kings!
Alan B.
Better than expected! Truly impeccable service. Your team was professional, knowledgeable, provided speedy delivery above and beyond standard. Vintage King Audio is definitely my go to for all of my audio and information needs.
James O.