$ 529 .00
No interest if paid in full within 12 months Learn more
PayPal Credit, Express Checkout and Pay in 4 available.
In Stock
Item is in stock and will ship the next business day. Place your order before 4:00pm ET Mon-Fri and we will ship your items the same day. 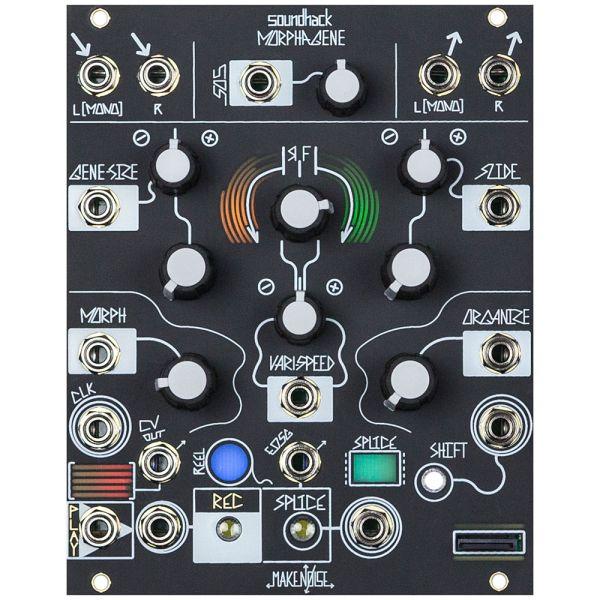 A collaboration with Tom Erbe of Soundhack, the Make Noise Morphagene Eurorack Module works with Reels, Splices, and Genes to create new sounds by letting you capture and manipulate existing ones. It also lets you search BETWEEN notes to find and capture the microsounds you can’t hear with the naked ear. Since the world of sounds is so vast and subjective, Morphagene doesn’t come with preset sounds, but offers you a blank SD card so that you can load in your own samples.

Once you have your recorded audio loaded, you can put samples in a particular order or jumble them using Organize. Vari-Speed will manipulate not only the playback speed, but also the playback direction. Playback and record are separate functions, so you can manipulate a sound, record it into a new Splice, and then play it back and layer more sounds on top of it. Use Gene Size to granularize your sounds and create textures.

More than a simple update of the Make Noise Phonogene, the Morphagene is named for its new Morph function, which introduces polyphony by layering and staggering genes. That said, if you’re already using the Phonogene, some of the basic workflow like Organize, Splice, and Gene Size will be familiar.

Great addition to my collection and VK rocks!

Please fill out the form below and a Vintage King Audio Consultant will contact you with a ship date for the Make Noise Morphagene Module.

Have a better price in mind for the Make Noise Morphagene Module that you've been checking out? We're willing to work on it!Please fill out the form below with your contact information.Once the form is submitted, a Vintage King Audio Consultant will contact you as soon as possible with our best price on this product.