$ 3,199 .00
No interest if paid in full within 12 months Learn more
Ships directly from Lynx Studio Technology
Note: This item may not be returnable or could require a restocking fee. Contact one of our Audio Consultants for more details. This item ships directly to you from the manufacturer. To ensure that the manufacturer currently has stock, please chat, call or email for the latest availability status. 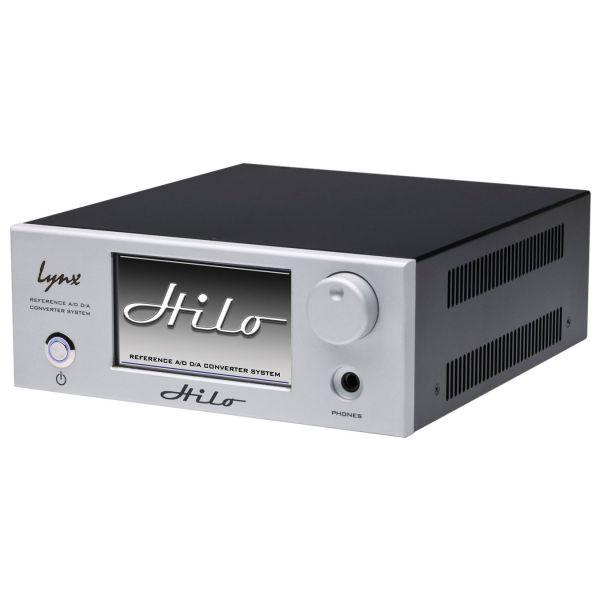 The internal 32-channel mixer allows any input to be routed to any output. In fact there are three stereo analog output options. Line-out that supports eight standard trim settings, monitor-out with a volume control, and a headphone output, also with a volume control. In fact the headphone output has its own dedicated D/A converter with the option of a different mix than the line and monitor outputs.

The LT-DANTE LSlot interface for Aurora and Hilo converters. The LT-DANTE is a two-port expansion card that supports the Dante audio networking standard adopted by a multitude of audio manufacturers for use in live, studio, broadcast and commercial installation applications.

The LT-DANTE LSlot card can be installed into any existing Hilo or Aurora with an easy and free firmware update. In addition, Lynx is making Dante-equipped Aurora and Hilo models available at the same time. These models are:

The LT-DANTE enables connectivity for the Aurora and the Hilo to Dante audio networks. Dante is a multi-channel audio networking solution developed by Audinate. The world’s leading professional audio manufacturers have adopted Dante, making it the standard for digital audio networking for recording, live, broadcast and commercial installations.

Dante audio networking utilizes standard IP networks to transmit high-quality, uncompressed audio with near-zero latency. It is the most economical, versatile, and easy-to-use audio networking solution and is scalable from simple installations to large-capacity networks running thousands of audio channels. The Hilo and Aurora are an obvious choice among integrators as their uncolored audio conversion provides the uncompressed high quality audio that Dante transmits over the network.

Dante allows users to replace multiple analog or multi-core cables with a single affordable Ethernet cable for transmitting high-quality multi-channel audio safely and reliably. Standard Gigabit routers can distribute signals throughout a facility. With Dante software, the network can be easily expanded and reconfigured with just a few mouse clicks. Hundreds of Dante-enabled audio products are currently available. The Lynx Aurora and Hilo converters have a proven track record in thousands of professional studios and audio production facilities around the world. Lynx has long been the leader in offering options in connectivity, computer platform choice and proactive customer support. The LT-DANTE card adds to this legacy.

Please fill out the form below and a Vintage King Audio Consultant will contact you with a ship date for the Lynx Studio Technology Hilo-DNT.

Have a better price in mind for the Lynx Studio Technology Hilo-DNT that you've been checking out? We're willing to work on it!Please fill out the form below with your contact information.Once the form is submitted, a Vintage King Audio Consultant will contact you as soon as possible with our best price on this product.