$ 1,079 .99
Your Savings: $ 390 .01 Msrp: $ 1,470 .00
No interest if paid in full within 12 months Learn more
PayPal Credit, Express Checkout and Pay in 4 available.
Special Order
Note: This item may not be returnable or could require a restocking fee. Contact one of our Audio Consultants for more details. Due to the special nature of this item, we order each unit fresh from the factory, exclusively for you! Lead times may vary so please chat, call or email for up-to-date inventory status. 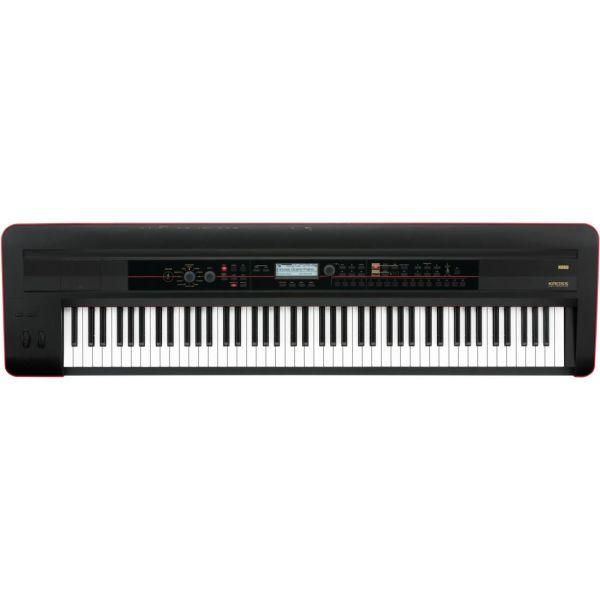 With the Korg KROSS, the sounds and songs that you've created at home and the system that you use every day can go with you onto the stage or into the street! Featuring rich sounds that exceed its class, yet remaining highly portable, the KROSS is designed for practical usability. There's a convenient mic input and a built-in audio recorder, and it can run on 6 x AA batteries. It's a distinctive new standard in music workstations, with specs and style that set it apart from all others.

The creative color and design will project a powerful presence whether you're performing on stage or anywhere else. The top panel as seen by the player is a sleek black color, while the rear and side panels visible by the audience use a bold, red color scheme. The two models feature different design concepts; the 61-key model is designed for active mobile use, while the 88-key model has a sophisticated design that looks great on stage.

In spite of being packed with functionality, the KROSS is lightweight and highly portable. The 61-key model with its distinctive rear bar is amazingly light; at only 4.3 kg/9.5 lb, it's the most portable in its category. The 88-key model packs a piano-touch hammer action keyboard into a mere 12.4 kg/27.3 lbs. Both models are highly portable and lightweight, and can operate on an AC adapter or on six AA alkaline or nickel-metal hydride batteries.

Piano, electric piano, and drum sounds that exceed their class

Top professional musicians around the world use Korg synthesizers. The piano, electric piano, and drum sounds of the KROSS have been taken from the flagship instruments used by these pros, giving the KROSS a set of sounds that surpasses other instruments in its class. The grand piano features lavishly-sampled decays with three levels of velocity as well as reproducing the noises produced by the damper pedal, ensuring that every nuance of your performance is reflected in the sound. Also included are an upright piano (unusual for a PCM synth), as well as distinctive sounds from Korg's famed SG-1D Sampling Grand and M1 Music Workstation. The five classic electric piano sounds are just as expressive as the acoustic piano sounds; they also include effect settings, giving you a complete package of the performance-ready sounds that you want. In addition, careful attention has been paid to the drum sounds that are indispensable for song production on a workstation, making them realistic and fresh.

A wide variety of sounds

Because of its portability, the KROSS will be used in a wide range of situations, and that's why it provides a broad variety of sounds that surpasses even the flagship models of the previous generation. The PCM data is approximately twice as large as preceding models such as the X50 and the PS60. Staples such as the frequently-used rock/jazz organ, strings, brass, and synth sounds have been brushed up. There are also instruments such as toy piano, accordion, combo organ, church organ, and even vintage instruments such as a tape sampler, as well as bell-type sounds and the sounds you need for cutting-edge dance music and electronica - unique sounds that have not been included in a synth of this class. The design goal has been to make KROSS the only instrument you need.

The EDS-i sound engine is a high-quality sound engine distilled from the EDS/EDS-X sound engines found on Korg’s most advanced instruments. It allows you to use a total of seven effects simultaneously: five insert effects and two master effects. Ranging from standards such as delay, reverb, chorus, flanger, and rotary speaker, and also including amp modeling powered by Korg's proprietary "REMS" modeling technology, and even a robot voice vocoder, you can choose from 134 different high-quality effects.

While the KROSS provides an extremely broad range of sounds, there are two dedicated dials that let you easily find the sound you need. First use the category dial to choose the broad category such as piano, electric piano, organ, bell, synths, basses, or strings. Then turn the select dial to find the sound you want. It's a quick way to focus on selecting the needed sounds without being distracted by sounds of another type.

Sounds that you've created or that you use frequently can be registered to four banks of 16 buttons, giving you a total of 64 sounds that can be recalled at a single touch. This is a real convenience during live performances or song production. You can also register audio songs and recall them along with sounds.

The MIC IN jack (1/4" phone jack) lets you directly connect a mic. If you're a vocalist as well as a player, there's no need to obtain a separate mixer. In addition, there's a LINE IN jack (stereo 1/8" jack) for you to connect your audio player, giving you the option of performing along with the playback in a variety of situations on stage or anywhere else you go.

Dedicated buttons are provided for Layer/Split settings. Start by selecting the first program you want to use; then press the dedicated button to enable Layer or Split. When this is on, a screen will appear in which you can choose the other sound and specify details such as the split point. Then simply write your settings, and the layer/split sound will be saved as a Combination.

Stereo audio recorder allows you to overdub your performances and vocals

The built-in stereo audio recorder can record not only the performance of the KROSS itself, but also the sound of a mic or external input. You can play backing tracks that you created, or overdub onto them to create songs and demos. Audio can be imported and exported as WAV files using an SD card (separately sold), making it easy to exchange material with your computer.

Step sequencer inherited from the Electribe, a 16-track MIDI sequencer, a drum track, and an arpeggiator

The KROSS features a step sequencer inherited from the popular Electribe series. It's a simple design in which you use the sixteen buttons to turn individual notes on or off, allowing you to quickly and easily create original rhythm patterns of up to 64 steps.The lightweight body of the KROSS contains all of the basic functionality you expect from a music workstation, including a full-featured 16-track MIDI sequencer with quantization, copy and paste, and individual note event editing. By using an SD card (sold separately), you can exchange SMF-format data with your computer. The KROSS gives you a full set of workstation and production tools, including a Drum Track function that lets you add rhythm simply by pressing a dedicated button, and an arpeggiator that can be used not only with synth sounds but also to generate guitar and bass riffs.

Please fill out the form below and a Vintage King Audio Consultant will contact you with a ship date for the Korg Kross 2-88 Mobile Workstation.

Have a better price in mind for the Korg Kross 2-88 Mobile Workstation that you've been checking out? We're willing to work on it!Please fill out the form below with your contact information.Once the form is submitted, a Vintage King Audio Consultant will contact you as soon as possible with our best price on this product.