$ 469 .00
No interest if paid in full within 12 months Learn more
Ships directly from Klark Teknik
Note: This item may not be returnable or could require a restocking fee. Contact one of our Audio Consultants for more details. This item ships directly to you from the manufacturer. To ensure that the manufacturer currently has stock, please chat, call or email for the latest availability status. 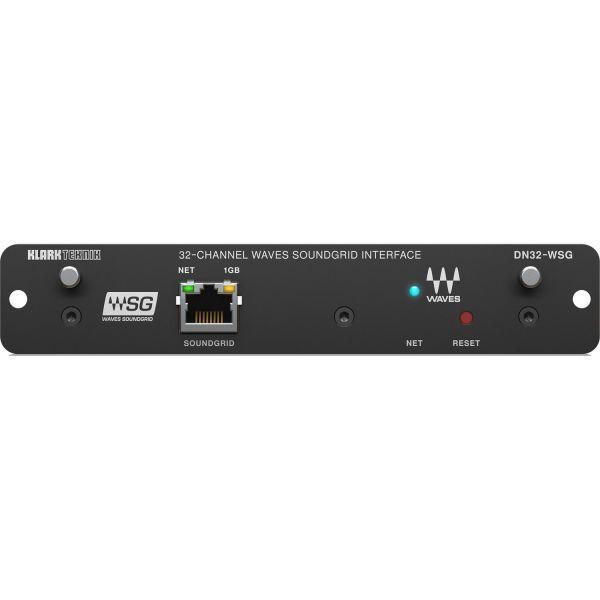 The Klark Teknik DN32-WSG expansion card allows M32 and X32 users to mix, record and play back multichannel audio with a plethora of plug-ins hosted on Waves SoundGrid servers in extremely low latency. Waves offers highest-fidelity audio plug-ins for basically every contemporary and vintage-emulated audio processing. DN32-WSG now allows you to use the very same industry-standard processing tool chain for live productions that you may use in your studio environment already.

Waves plug-ins can be run anywhere on the SoundGrid network, either on dedicated SoundGrid servers or as native plug-ins on connected personal computers. Native processing offers the flexibility of using standard audio computers, while SoundGrid plug-in servers ensure minimal I/O latency, which is essential for live monitoring. You can apply, mix and cascade any processing in the network with total flexibility, whatever your production takes.

Your Door to the Processing Power of Waves SoundGrid

DN32-WSG offers full-duplex audio streaming for 32 channels in and out, with 48 kHz or 44.1 kHz sample rates and 24-Bit resolution. Round-trip network latencies down to 0.8 ms are possible, depending on complexity of the network infrastructure. Tip: Any audio plug-ins may invoke additional latency depending on their type and nature. Make sure you select low-latency processing exclusively, such as the “live” versions of plug-ins, when inserting effects into live monitoring audio paths.

Once audio routes have been configured in a SoundGrid network using PC applications such as Waves MultiRack or StudioRack, the audio paths will be re-established at every startup automatically. There are no network specific settings to be configured in the mixing console. Just route your send signals to the card outs and return the processed signals where needed.

There are two ways of using external processing in Midas M32 and Behringer X32 mixing consoles.

Note: In the second example, channels only see digital input signals. Hence, the preamp input gain and phantom power controls are available on the Setup/Preamps page only.

Created with and for live sound engineers, Tracks Live is the ultimate multi-track recording software solution for SoundGrid systems, designed to capture live performances of any kind, from the smallest gig to the largest production.

Tracks Live enables easy switching between stereo out and multi out modes, allowing you to toggle back and forth between recording and virtual soundcheck with the click of a button. The automatic multichannel re-routing engine also adapts to any changes you make on the fly, making it easier than ever to set up big shows with hundreds of tracks.

Waves is Supporting You

Documentation and how-to videos are available for all aspects of applying SoundGrid audio processing and patching, as well as installing and registering Waves applications such as MultiRack, StudioRack or any plug-ins.

A SoundGrid Certification Program guides you on your way to becoming a pro-user. In addition, there are also high-profile video tutorials from international top producers with all sorts of hands-on production advice.

Please fill out the form below and a Vintage King Audio Consultant will contact you with a ship date for the Klark Teknik DN32-WSG 32-Channel Waves SoundGrid Expansion Module.

Have a better price in mind for the Klark Teknik DN32-WSG 32-Channel Waves SoundGrid Expansion Module that you've been checking out? We're willing to work on it!Please fill out the form below with your contact information.Once the form is submitted, a Vintage King Audio Consultant will contact you as soon as possible with our best price on this product.