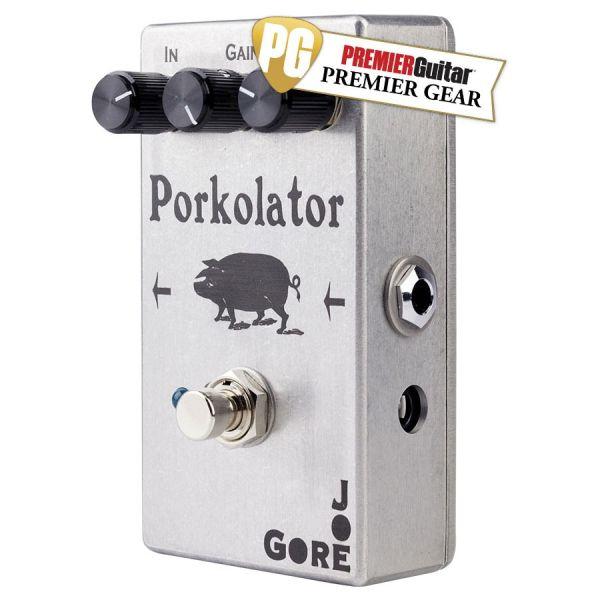 Back in the 1970s, Interfax, a small effect company in Milwaukee, Wisconsin, created the Harmonic Percolator. It was a weird distortion pedal whose enclosure had all the visual charm of a 1987 PC (think: beige) No one cared, and the Percolator soon vanished. That is, until Chicago guitarist/engineer Steve Albini rediscovered it years later. It became his secret weapon. Eventually the Percolator became a popular DIY project, and several manufacturers have created near-exact clones. But Porkolator isn’t one of those. Yeah, it swipes some ideas from the original circuit, but it sharpens the core tone and vastly expands the range.

The Percolator’s distortion was edgy and aggressive. Some describe it tone as “tube-like,” but they must be deaf — it sounds nothing like tube distortion. When tubes get hot, note attacks get softer and high frequencies get rounded off. But on the Percolator, note attack remains crisp and defined, even at high gain. It sounds more like overdriving the input of a funky tape recorder. The tones also have sharp resonant peaks, perfect for cutting through onstage or in a mix. Because the pedal emphasizes a guitar’s particular resonant peaks, the Porkolator’s color varies from instrument to instrument.

The two-transistor circuit is bizarre: It’s got one negative-ground silicon transistor and one positive-ground germanium transistor. Joe Gore kept that basic architecture, but took it in new directions. (even after auditioning the rare transistors used in the originals, these alternatives sound way better.)

The original had a single gain control and a passive master volume. It wasn’t particularly loud. Here, though, there are two gain stages, one at the input and one mid-circuit. They’re highly interactive, and they’re fastidiously scaled to yield great tones throughout the entire ranges of their knobs. The IN knob sets your input capacitance — think of it as a “fat vs. crisp control.” GAIN slathers on the distortion. OUT is a master volume control.

Instead of a passive volume control, there’s a JFET-driven gain stage. At low settings, you get something like the original output, but with airier highs and clearer low-mids. When you crank it, you get Götterdammerung. But you can also get tough tones at modest levels.

Despite all its gain, Porkolator has extraordinary dynamic response. If you’re the sort of guitarist who uses your volume control to get varying shades of distortion, you’ll be in hog heaven.

Porkolator runs on standard 9-volt batteries or power supplies. It was created in San Francisco by Joe Gore and is built in Michigan by skilled craftspeople paid a fair wage. It comes with a lifetime warranty.

Think of IN and GAIN as separate but interactive distortion controls. With IN set high and GAIN set low, you get fat, bottom-heavy sounds. With IN low and GAIN high, there’s crisper attack and leaner lows. Explore — there are many cool combinations. You can get many more shades by adjusting your guitar’s volume control. Set your final level with OUT.

"Few Harmonic Percolator-inspired pedals have felt as full of possibilities as Joe Gore’s Porkolator. It lives in gaps that many distortions leave empty, adding dynamic range, character by the baleful, and a colorful, detailed overtone signature that makes guitars sound alive and thrilling, even when you’re not running the pedal wide open. It makes even simple chords more than a sum of their parts. Porkolator’s bark sounds absolutely awesome when you strum with ferocity. You can play first-position folk chords at screaming gain levels without losing a trace of overtone detail. And when you attenuate your guitar volume, the same chords take on a brash, ringing quality perfect for particularly potent power pop, and melodic lines have peaky excitement that makes leads leap from a mix. Its dynamic range is a delight to work with. If you’ve grown weary of the overdrive, fuzz, and distortion flavors offered via most classic dirt circuits, you might end up re-energized by the many unexpected textures Porkolator puts at your fingertips."

"Devastatingly magnificent. My reaction upon plugging it in was, 'Oh! That's what it's supposed to sound like."

“Loosely based on the Harmonic Percolator of the ’70s, it’s a weird distortion/fuzz with tons of attitude. It’s awesomely inspirational. All of Joe’s pedals are.”

Please fill out the form below and a Vintage King Audio Consultant will contact you with a ship date for the Joe Gore Porkolator (Demo Deal).

Have a better price in mind for the Joe Gore Porkolator (Demo Deal) that you've been checking out? We're willing to work on it!Please fill out the form below with your contact information.Once the form is submitted, a Vintage King Audio Consultant will contact you as soon as possible with our best price on this product.