$ 754 .95
Your Savings: $ 145 .00 Msrp: $ 899 .95
No interest if paid in full within 18 months Learn more
Ships directly from JL Cooper
Note: This item may not be returnable or could require a restocking fee. Contact one of our Audio Consultants for more details. This item ships directly to you from the manufacturer. To ensure that the manufacturer currently has stock, please chat, call or email for the latest availability status. 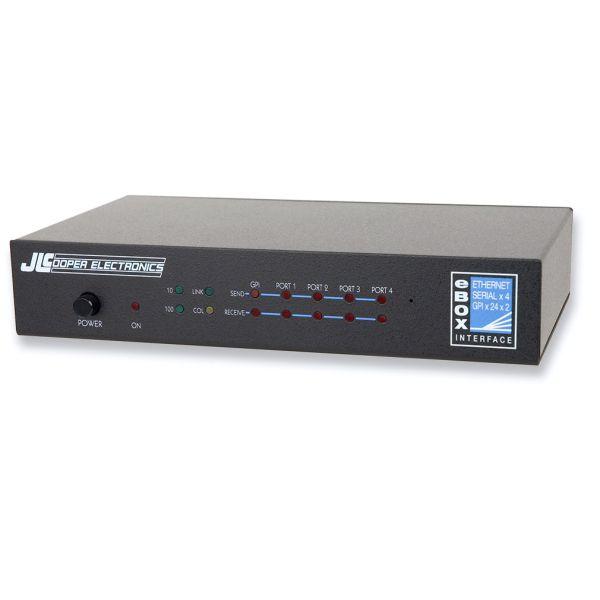 JL Cooper eBOX is a 10/100BASE-T (Ethernet) to Quad RS-232/422 (9-Pin) and GPI hardware interface. It acts as a portal for controlling devices across your facility or across the world. It eliminates information bottlenecks and overcomes distance limitations typically inherent to serial communication. It simplifies long distance cabling by using IP addressable, point-to-point architecture to send control messages over existing 10/100 BASE-T wiring.

Commands from a host NLE, Browser or RS-422 switcher/controller are directed to individual devices on the network. This allows broadcast or networked facilities to control distanced machine rooms from a facility's central server. eBOX is ideal for broadcast television, streaming media networks, multi-room editing facilities, news production, alert systems, monitor switching or in any audio/video/multimedia studio where remote hosts need to control devices over long distances or via the Web.

eBOX can be used as an IP remote RS-422 interface, controlled by ES-450 Je controllers. Host to eBOX, eBOX to host and eBOX to eBOX communication is possible. An unlimited number of units can be addressed. JLCooper's Developer Documentation provides comprehensive tools for software developers to link Visual Basic, C++, HTML or embedded devices for direct control of any device connected to any eBOX. eBox converts 4 serial ports and 24 GPI (General Purpose Interface) inputs and 24 GPI outputs to 100/10baseT Ethernet.

The serial ports can be configured in the eld to appear as EIA/TIA RS-232E and CCITT V.28 or as EIA/TIA RS-422A, RS-423 and Federal Standards 1020 & 1030 ports. Additionally, the port direction can independently be configured as DTE or DCE. eBOX is directly supported by Click Effects, Ensemble Designs (Avenue), Imagine Communications, Newtek (Tricaster), Yamaha (Nuage version 1.7 or newer), ChyronHego (Vidigo Live) and other professional broadcast applications. eBox communicates over standard TCP/IP which allows it to be used with any host computer. With TCP/IP, traffic can be routed over internal LANs, wireless LANs, MANs, WANs and even over the Internet.

Configuration is accomplished through a web page server built into the eBox. Items such as port speed, parity, IP address, remote IP address and TCP port are set using supplied software. Settings are stored in nonvolatile memory. Typically, the eBox functions as a server, passively waiting for client devices to connect to it. The device can be a computer or another eBox configured as a client. When the eBox is configured as a client, it will actively attempt to connect to the server eBox. Once accomplished, eBox will then pass data received in the serial or GPI ports to the remote eBox. If there is no data received, eBox will not send any TCP packets.

This eBox port is just like an Ethernet port on a computer, and can be connected to a hub, switch or router. eBox supports IEEE 802.3u clause 28 Auto-Negotiation which automatically senses the Ethernet port speed & duplex operation and chooses the highest performance settings. Front panel LEDs indicate various operating conditions of the Ethernet connection.

The four serial ports along the top of the rear panel are 9 pin D-Sub connectors which can be configured for RS-232C or RS-422A operation. In RS-422 mode, eBox direction can be configured to appear as a Controller or a Device. In RS- 232 mode, the eBox appears as a DCE or DTE.

The GPI ports on the rear of the eBox are 25 pin D-sub connectors. The GPI In connector has 24 TTL/CMOS compatible inputs with internal pull-ups to +5 volts. The GPI Out connector has 24 TTL/CMOS compatible outputs. On both connectors, pin 1 is the ground reference and pins 2-25 are the GPI signals. When eBoxes connected together in a client/ server manner establish a connection, both client and server will send the state of its GPI In ports to each other so it can be shown on the GPI Output port on the remote eBox. After that, only changes to a GPI In port will cause an eBox to send a GPI message to the remote eBox. A packet/keep alive message is sent every 5 seconds.

eBOX can act as a GPI to Serial converter. Each of the 24 GPI Inputs can be assigned to send P2 or Odetics Commands. Assignments are retained in non-volitile memory. Basic tally back information is provided via GPI outputs.

eBox can also work as an interface for GPI or serial to Doremi Labs Servers. eBox supports older P2 controllers via LAN, WAN and Internet.

EBox contains a basic security mechanism that prevents unintended hosts from passing data through a secured eBox. A password is set on the configuration page and stored in non-volatile memory. When password protection is enabled, eBox embeds the password in the transmitted IP packet. At the remote end, the receiving eBox must have password protection enabled and be programmed with a matching password.

Please fill out the form below and a Vintage King Audio Consultant will contact you with a ship date for the JL Cooper eBox.

Have a better price in mind for the JL Cooper eBox that you've been checking out? We're willing to work on it!Please fill out the form below with your contact information.Once the form is submitted, a Vintage King Audio Consultant will contact you as soon as possible with our best price on this product.