$ 179 .00
No interest if paid in full within 12 months Learn more
In Stock
Orders placed by 4:00pm ET M-F will ship the same day. Place your order before 4:00pm ET Mon-Fri and we will ship your items the same day. 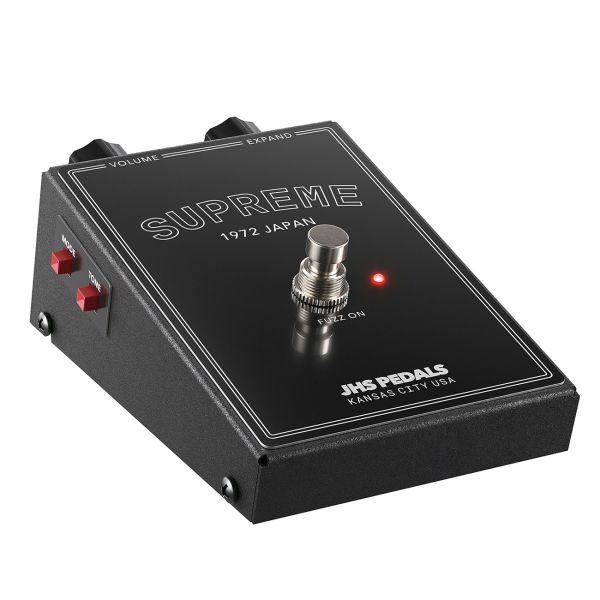 The JHS Pedals Supreme is an exact replica of the extremely rare black and grey model of the Univox Unicord Super-Fuzz from 1972. In the late 1960s, Japan was bursting at the seams with amazing guitar pedal companies and innovations. One of the most sought after effects from this time and place is the Univox Super-Fuzz. This effect is an octave fuzz that turns any note or chord into a thick and searing texture. Playing a high octave up alongside the distorted note, this is an effect that demands your attention. First produced inside of a large amp head sized multi-effect unit called the Honey Psychedelic Machine (1967) and then re-released a few months later as a standalone pedal called the Honey Baby Crying Effect. Honey soon became Shin-Ei and by 1968 Shin-Ei became the guitar pedal powerhouse of Japan, making Shin-Ei branded effects as well as producing those same circuits for dozens of brands like Shaftesbury, Kent, Crown, Jax, and America's Univox. This circuit found its way into the lineup of brands all over the world.

Thanks to product placement by Pete Townsend of The Who, the Univox Unicord Super-Fuzz version found fame above all the rest. First produced in a simple, unassuming grey metal enclosure (1968), it transitioned into a more eye catching form factor utilizing a large rectangle foot pad that said SUPER-FUZZ in large letters across the top (1970). Red and blue, black and grey, white and black, you could pick your color.

The Supreme is an exact replica of extremely rare black and grey model. Although every early version of this pedal sounds strikingly similar, this 1972 unit has a certain magic that makes it stand out above the others. Imagine an Octavia Fuzz that woke up on the wrong side of the bed, and that’s what you're plugging into here: a loud, screaming, full and vibrant octave fuzz that is always at 11.

The controls are Volume and Expand. Volume makes the effect louder as you turn it and Expand increases the amount of fuzz. On the side you will see two buttons. The “Tone” button engages a mid cut that flattens out the Supreme’s attack and makes it more submissive. Think of this as a preset scooped mid EQ control. The “Mode” button activates our very own “JHS Mode” setting. You will hear a much more pronounced octave up effect, thicker mid-range, and more available volume/boost.

If you want to replicate the classic octave fuzz sounds of Pete Townsend, Black Keys, White Stripes, Beastie Boys, and Mudhoney, this is it.


The Legends of Fuzz

The "Legends Of Fuzz" series is JHS' tribute to the most important fuzz circuits ever made. It is their way of ensuring that the stories of these effects live on in the music that you are going to make. From the earliest days of fuzz in the mid-60s London scene to the 1990s ex-Soviet military factories that brought the Big Muff back to life, fuzz tells a story, and that story includes guitarists just like you. There is nothing more primitive than plugging your guitar into a vintage fuzz circuit; it is raw, untamed, and so pure that it pushes the boundaries of what your instrument can accomplish. Plug into a fuzz and plug into sixty years of beautifully broken sound.

Please fill out the form below and a Vintage King Audio Consultant will contact you with a ship date for the JHS Pedals Supreme - Legends of Fuzz.

Have a better price in mind for the JHS Pedals Supreme - Legends of Fuzz that you've been checking out? We're willing to work on it!Please fill out the form below with your contact information.Once the form is submitted, a Vintage King Audio Consultant will contact you as soon as possible with our best price on this product.

VIEW
137429
I would like to thank VK for the wonderful sales assistance, service and prices. This was my first purchase with you and it won't be my last. I only wish I'd discovered you years ago!
Matthew R.
I had two Grammy wins this year - Ray LaMontagne & Carolina Chocolate Drops. Both made with help from Vintage King!
Ryan F.
In almost 20 years in Pro audio buying, never did I receive a unit so well packed and exactly as described. Works flawlessly. The whole process has been so smooth. I will never hesitate to do business with you guys in the future and will recommend you to everyone I know.
Martin C.
This was my first experience buying something from Vintage King (although I surf the "used" categories on the website frequently!), and, despite being on the other side of the world, I had absolutely no trouble and everything went very smoothly.
Phil T.
The speed of delivery exceeded my expectations! I was VERY pleased that my shipment arrived in time for a scheduled vocal tracking session. The packing insured that my order arrived safely. And the sales staff responded quickly to questions regarding the product.
James P.
Thank you so much! Vintage King has been so fair and easy to work with. I can't thank you enough. It feels good to trust such a hefty purchase to folks who are so helpful and knowledgeable. Vintage King is a sound designers dream store.
Noa L.
You guys have excellent customer service and I am excited about the next upgrade I complete on my fifth recording facility. I've been in the studio business for forty plus years. The salesman I worked with at Vintage King was the best of the best. You all rock!
Robby T.
I would recommend Vintage King to any one looking for top-class gear, unbeatable customer service and the best prices on the map!
Jake D.
My experience with Vintage King was excellent. The order was here fast considering it was out of stock. The sales person had SKB send it to me directly and I couldn't have been more pleased.
Michael D.
From the minute I placed my order I was kept well-informed through each step in your process. Even though I was buying a comparatively modest piece of gear, your attention to detail made me feel like I was purchasing a six-figure mixing desk.
Thomas W.
I am a new customer of yours. You guys provided me the absolute best deals in ordering all the equipment to power my brand new recording studio. Your customer service is amazing and i will always deal with you from here on out.
Rob M.
Thanks for your great service and getting this out today. You guys really are the Kings!
Alan B.
Better than expected! Truly impeccable service. Your team was professional, knowledgeable, provided speedy delivery above and beyond standard. Vintage King Audio is definitely my go to for all of my audio and information needs.
James O.