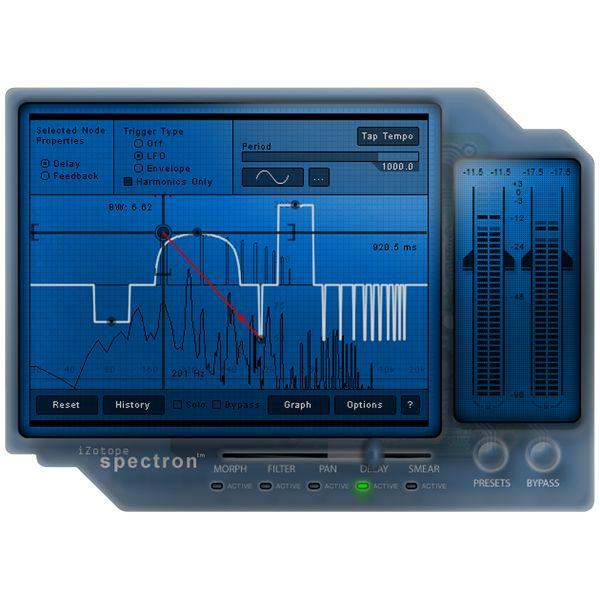 The iZotope Spectron is the next generation of spectral effect plug-ins allowing unmatched control over audio by frequency. Now, take your mixed drum track and add delay to the snare, or send the hi-hat panning back and forth. Give your guitar a delay, but only on the high notes. Make your bass ring down low, but stay clear and dry up high. For effects that are subtle or out of this world, Spectron is the one-stop spectral toolbox.

Spectron splits audio into thousands of frequency bands, applies independent delay, morph, filter and pan effects, and then resynthesizes the processed audio into an entirely new sound. Using this unique control over individual frequencies, Spectron can sound like a phaser, chorus, vocoder and many new classes of effects. Spectron is perfect for radio spots, loop and sample manipulation, sound effect design, and electronic & dance music production.

Even though Spectron’s approach to processing is unique, the Spectron interface relies on standard controls. The Spectron effects are manipulated by Spectral Nodes which behave like the nodes of a parametric EQ with control over frequency, amount, bandwidth, and shape. Once you’ve mastered the basic node operation, you can use Spectron Nodes with LFOs and envelope triggers to open another level of creativity. The frequency, amount, shape, and width automate with advanced control over speed and patterns not possible with normal automation. For example, setup a volume trigger to change the delayed frequency and play it live on a guitar allowing you to control the amount of delay based on how loud you play!

Looking for a New Sound?

Spectron was designed with creativity and originality in mind. With Spectron, you can easily create effects that aren’t possible with analog hardware, inspiring new ideas for creating intricate and evolving soundscapes. Looking for something a little more subtle? You can use Spectron just as easily to add coloration with flanges, spatialization, or light filter sweeping. Read about how producer Atticus Ross used Spectron this way to process Jonathan Davis’ vocals for a “cold” sound.

Spectron on the Silver Screen

Spectron is the ideal tool for atmospheric soundscapes and special effects for film, video and game sound design. Create an eerie, extra-terrestrial setting by simply applying panning and delay to parts of a string or other pad patch. Use left-right filtering to simulate a sound source coming from a specific point around the subject of a scene. Make explosions come to life by morphing your stock explosion sound with a car crash effect or a screaming vocal. Read how sound designer Aaron Glascock creates organic, yet unfamiliar sounds in "War of the Worlds" and other blockbuster films.

Extend the Life of Your Loops and Samples

Every sound designer, producer and electronic musician has at least one set of loops and samples sitting around. Save yourself some time and money and let Spectron turn those old, worn out samples into a multitude of new and exciting sounds. Add a sense of space to your drums with panning, turn your basses into malfunctioning robots with harmonic delays, make your vocal samples burst into a chorus of pipe organs with morphs.

Hundreds of Effects in an Instant

Spectron can stand on its own with only the factory presets to provide you hours of inspiration with new sounds. Looking for a crazy effect right away? Check out Spectron’s integrated preset system. Right out of the box, you get tons of quality presets, and the list is constantly growing. With the presets, Spectron is a virtual “stomp box” for guitars, keys, bass, vocals, and anything else that needs new aural life. Experienced users will find the presets as very useful starting points for creating their own sounds with Spectron. Be sure to check the iZotope web site for new presets.

Do you have a really cool patch, but wish you could control some of the effects more precisely, or control many parameters at once? Spectron offers over 225 automatable parameters, which means that almost anything that you want to automate in your host application can be assigned. For instance, if you have a section of a drum break that you want to twist and melt into a completely arrhythmic mess at the end, you can automate an increase in delay time and feedback just for the part that you want. If you want to add a filter drop in a synth line, just automate an increase in a filter node’s bandwidth or cutoff frequency. You can get really creative with this, and it always pays off to experiment. With a little ingenuity, you can hand-craft completely immersive and evolving soundscapes that were previously impossible without loads of effects and a crack team of synthesis masters at the wheel!

Please fill out the form below and a Vintage King Audio Consultant will contact you with a ship date for the iZotope Spectron - Electronic Delivery.

Have a better price in mind for the iZotope Spectron - Electronic Delivery that you've been checking out? We're willing to work on it!Please fill out the form below with your contact information.Once the form is submitted, a Vintage King Audio Consultant will contact you as soon as possible with our best price on this product.

VIEW
13221
I would like to thank VK for the wonderful sales assistance, service and prices. This was my first purchase with you and it won't be my last. I only wish I'd discovered you years ago!
Matthew R.
I had two Grammy wins this year - Ray LaMontagne & Carolina Chocolate Drops. Both made with help from Vintage King!
Ryan F.
In almost 20 years in Pro audio buying, never did I receive a unit so well packed and exactly as described. Works flawlessly. The whole process has been so smooth. I will never hesitate to do business with you guys in the future and will recommend you to everyone I know.
Martin C.
This was my first experience buying something from Vintage King (although I surf the "used" categories on the website frequently!), and, despite being on the other side of the world, I had absolutely no trouble and everything went very smoothly.
Phil T.
The speed of delivery exceeded my expectations! I was VERY pleased that my shipment arrived in time for a scheduled vocal tracking session. The packing insured that my order arrived safely. And the sales staff responded quickly to questions regarding the product.
James P.
Thank you so much! Vintage King has been so fair and easy to work with. I can't thank you enough. It feels good to trust such a hefty purchase to folks who are so helpful and knowledgeable. Vintage King is a sound designers dream store.
Noa L.
You guys have excellent customer service and I am excited about the next upgrade I complete on my fifth recording facility. I've been in the studio business for forty plus years. The salesman I worked with at Vintage King was the best of the best. You all rock!
Robby T.
I would recommend Vintage King to any one looking for top-class gear, unbeatable customer service and the best prices on the map!
Jake D.
My experience with Vintage King was excellent. The order was here fast considering it was out of stock. The sales person had SKB send it to me directly and I couldn't have been more pleased.
Michael D.
From the minute I placed my order I was kept well-informed through each step in your process. Even though I was buying a comparatively modest piece of gear, your attention to detail made me feel like I was purchasing a six-figure mixing desk.
Thomas W.
I am a new customer of yours. You guys provided me the absolute best deals in ordering all the equipment to power my brand new recording studio. Your customer service is amazing and i will always deal with you from here on out.
Rob M.
Thanks for your great service and getting this out today. You guys really are the Kings!
Alan B.
Better than expected! Truly impeccable service. Your team was professional, knowledgeable, provided speedy delivery above and beyond standard. Vintage King Audio is definitely my go to for all of my audio and information needs.
James O.