$ 329 .00
No interest if paid in full within 12 months Learn more
Special Order
Note: This item may not be returnable or could require a restocking fee. Contact one of our Audio Consultants for more details. Due to the special nature of this item, we order each unit fresh from the factory, exclusively for you! Lead times may vary so please chat, call or email for up-to-date inventory status.

Quad function Eurorack module with AD, AHR, Cycling and Burst modes all featuring a user-selectable maximum output level of either 5 or 10 V
MFR# QUADRAX-3U
Shop All Intellijel
Skip to the end of the images gallery 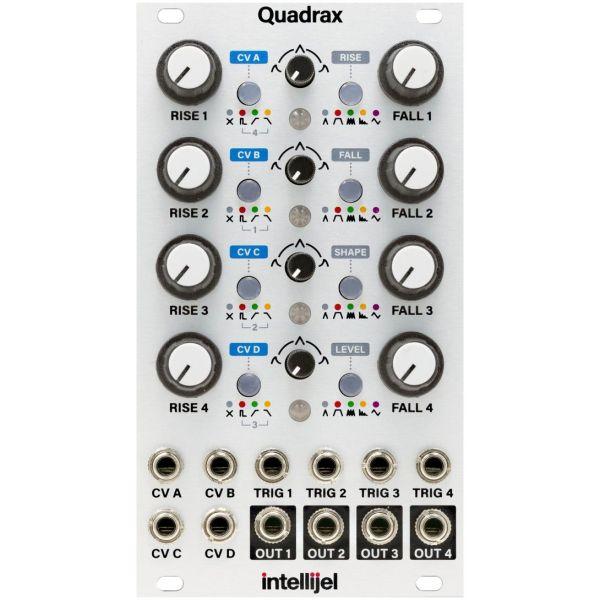 Whether you are exploring the unique channel functions, CV modulation matrix or chaining options, it is quickly apparent that there are infinite possibilities to explore. The Intellijel Quadrax Quad Function/Burst Generator/LFO with CV Matrix is powerful and tactile modulation generator will quickly become the beating heart of your modular system. The Quadrax consists of four independent, CV-controllable channels, each of which can be configured to perform any one of the following functions:

The envelopes all feature a continuously variable response curve, ranging from logarithmic through linear to exponential, and each stage can be as snappy as 0.3 ms to as lengthy as 20 seconds.

When set to Burst mode, the channel generates a rising or falling burst of pulses, with full control over the length of the pulse burst, the number and shape of the bursts within it, and whether the bursts increase or decrease in amplitude over the burst.

AD, AHR, Cycling and Burst modes all feature a user-selectable maximum output level of either 5 V or 10 V.

LFO mode offers control over the frequency and waveshape, while providing a unique morphing feature that creates numerous variations of the selected waveshape. LFOs can be either free-running or beat-synchronized using the channel’s TRIG input.

Channels can be chained together to create complex multi-stage envelopes, with each channel triggered by the previous channel’s trigger input, end-of-rise, or end-of-fall. This enables multiple function generators to fire simultaneously, or it enables the creation of complex multi-stage envelopes by allowing the linked function to fire either at the end of the previous function’s rise time, or at the end of its fall time.

Four freely-assignable, step-attenuverted CV inputs are capable of modulating any or all of the various parameters across all four channels using the built-in CV matrix, and built-in attenuversion for each assignment.

Quadrax remembers its current state (Mode and CV assignments, channel links, etc) and retains that state even if power is removed, meaning Quadrax will always turn on in exactly the same state as you last left it.

Please fill out the form below and a Vintage King Audio Consultant will contact you with a ship date for the Intellijel Quadrax Quad Function/Burst Generator/LFO with CV Matrix.

Have a better price in mind for the Intellijel Quadrax Quad Function/Burst Generator/LFO with CV Matrix that you've been checking out? We're willing to work on it!Please fill out the form below with your contact information.Once the form is submitted, a Vintage King Audio Consultant will contact you as soon as possible with our best price on this product.

VIEW
125783
I would like to thank VK for the wonderful sales assistance, service and prices. This was my first purchase with you and it won't be my last. I only wish I'd discovered you years ago!
Matthew R.
I had two Grammy wins this year - Ray LaMontagne & Carolina Chocolate Drops. Both made with help from Vintage King!
Ryan F.
In almost 20 years in Pro audio buying, never did I receive a unit so well packed and exactly as described. Works flawlessly. The whole process has been so smooth. I will never hesitate to do business with you guys in the future and will recommend you to everyone I know.
Martin C.
This was my first experience buying something from Vintage King (although I surf the "used" categories on the website frequently!), and, despite being on the other side of the world, I had absolutely no trouble and everything went very smoothly.
Phil T.
The speed of delivery exceeded my expectations! I was VERY pleased that my shipment arrived in time for a scheduled vocal tracking session. The packing insured that my order arrived safely. And the sales staff responded quickly to questions regarding the product.
James P.
Thank you so much! Vintage King has been so fair and easy to work with. I can't thank you enough. It feels good to trust such a hefty purchase to folks who are so helpful and knowledgeable. Vintage King is a sound designers dream store.
Noa L.
You guys have excellent customer service and I am excited about the next upgrade I complete on my fifth recording facility. I've been in the studio business for forty plus years. The salesman I worked with at Vintage King was the best of the best. You all rock!
Robby T.
I would recommend Vintage King to any one looking for top-class gear, unbeatable customer service and the best prices on the map!
Jake D.
My experience with Vintage King was excellent. The order was here fast considering it was out of stock. The sales person had SKB send it to me directly and I couldn't have been more pleased.
Michael D.
From the minute I placed my order I was kept well-informed through each step in your process. Even though I was buying a comparatively modest piece of gear, your attention to detail made me feel like I was purchasing a six-figure mixing desk.
Thomas W.
I am a new customer of yours. You guys provided me the absolute best deals in ordering all the equipment to power my brand new recording studio. Your customer service is amazing and i will always deal with you from here on out.
Rob M.
Thanks for your great service and getting this out today. You guys really are the Kings!
Alan B.
Better than expected! Truly impeccable service. Your team was professional, knowledgeable, provided speedy delivery above and beyond standard. Vintage King Audio is definitely my go to for all of my audio and information needs.
James O.