$ 3,850 .00
Your Savings: $ 450 .00 Msrp: $ 4,300 .00
or $161/month for 24 months 0% interest for 24 months. 24 equal monthly payments required. Learn more
More On Order
This product is in high demand and we are shipping as many orders as we can. Place your order today to be included in the earliest possible shipment. Order now and we'll ship when in stock from one of our three fulfillment centers.

Iconic optical tube compressor known for smooth, transparent compression with an intuitive interface making it easy to dial in perfect sound - the “go-to” vocal compressor for any genre!
MFR# CL1B
Shop All Tube-Tech
Skip to the end of the images gallery 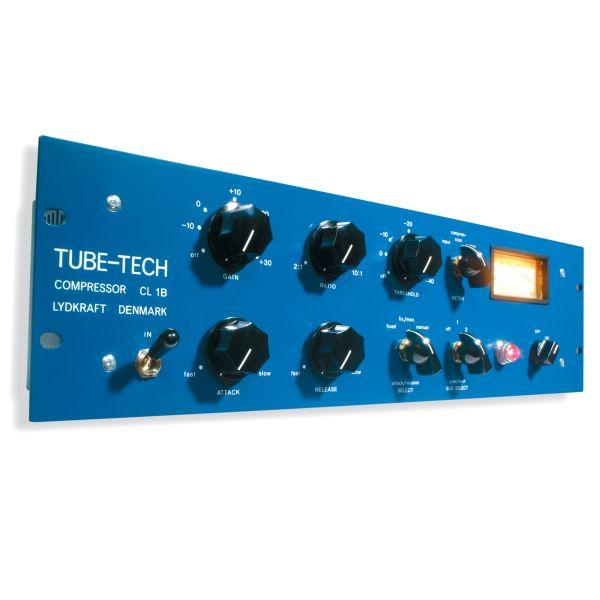 The Tube-Tech CL 1B Compressor is basically an optical compressor on steroids. Its all tube design delivers smooth, musical compression without introducing harshness, even when the needle is pegged. Capable of quickly and easily producing radio-ready vocals, the CL 1B is a well-known secret in the rap community. Also revered by rockers, the CL 1B excels at smoothing out bass lines, smashing electric guitars, and getting keys to sit just right in the mix. The CL 1B has been used on countless legendary recordings and is a "go-to" vocal compressor for any genre. Within minutes of getting your hands on the CL 1B you’ll be able to hear and feel the difference. The CL 1B is incredibly easy to use and features an intuitive interface for quickly dialing in the perfect settings for any signal.

The Tube-Tech CL 1B features a gain-reduction element positioned immediately after the input transformer, which is controlled by the sidechain amplifier. The CL 1B features two time control circuits (one for fixed attack and release times, and the other for variable) which can either be used separately or combined. A dedicated bus selector with three positions (Off, Bus 1, Bus 2) can be used to link up to 10 compressors together in your signal-chain. The gain reduction element is followed by a tube-based push-pull amplifier with variable gain up to 30 dB, providing powerful yet transparent compression. Input and output transformers have a static-screen between the primary and secondary wirings, allowing for minimal distortion. Both the input and output are balanced and fully floating to offer you maximum flexibility when patching into your system.

Originally introduced in 1991, the CL 1B quickly became an industry standard compressor thanks to its one-of-a-kind sound. Known for being smooth, warm and transparent, the CL 1B can be found rack mounted in major studios all around the world. Featuring a selectable ratio from 2:1 to 10:1, attack times from .5 ms to 300 ms, and release times from .05 seconds to 10 seconds, the CL 1B is one of the most versatile optical compressors on the market.

Amazing unit. Has a magical subtle crunch and sheen, but doesn’t sound like it’s pumping. Worth it.

Works as advertised thank you!!

It’s everything good you hear about on forums
Love it

This compressor is the real deal..it works amazingly with vocals, it’s smooth ,round and punchy just gives the vocals a “finished” sound straight of the bat ... !!!

I loved my LA-2A, but to have more control with attack and release, I had to try it. The vocals I track with it have never sounded better!

Recently I made the plunge in a hardware unit after using the plug-in version for the last few years. The real thing really does step up the sound quality vs. the plug in (which is great for the money). Vocals are now larger than life sounding, exciting, have more cut and a cool distortion vibe to the top end when the compressor is driven. Makes everthing sound "polished" in a way that I couldn't squeeze out of the plug-in. If I had only one vocal compressor, this one covers all the bases, especially for modern styles.

Please fill out the form below and a Vintage King Audio Consultant will contact you with a ship date for the Tube-Tech CL 1B Optical Tube Compressor.

Have a better price in mind for the Tube-Tech CL 1B Optical Tube Compressor that you've been checking out? We're willing to work on it!Please fill out the form below with your contact information.Once the form is submitted, a Vintage King Audio Consultant will contact you as soon as possible with our best price on this product.

VIEW
265
I would like to thank VK for the wonderful sales assistance, service and prices. This was my first purchase with you and it won't be my last. I only wish I'd discovered you years ago!
Matthew R.
I had two Grammy wins this year - Ray LaMontagne & Carolina Chocolate Drops. Both made with help from Vintage King!
Ryan F.
In almost 20 years in Pro audio buying, never did I receive a unit so well packed and exactly as described. Works flawlessly. The whole process has been so smooth. I will never hesitate to do business with you guys in the future and will recommend you to everyone I know.
Martin C.
This was my first experience buying something from Vintage King (although I surf the "used" categories on the website frequently!), and, despite being on the other side of the world, I had absolutely no trouble and everything went very smoothly.
Phil T.
The speed of delivery exceeded my expectations! I was VERY pleased that my shipment arrived in time for a scheduled vocal tracking session. The packing insured that my order arrived safely. And the sales staff responded quickly to questions regarding the product.
James P.
Thank you so much! Vintage King has been so fair and easy to work with. I can't thank you enough. It feels good to trust such a hefty purchase to folks who are so helpful and knowledgeable. Vintage King is a sound designers dream store.
Noa L.
You guys have excellent customer service and I am excited about the next upgrade I complete on my fifth recording facility. I've been in the studio business for forty plus years. The salesman I worked with at Vintage King was the best of the best. You all rock!
Robby T.
I would recommend Vintage King to any one looking for top-class gear, unbeatable customer service and the best prices on the map!
Jake D.
My experience with Vintage King was excellent. The order was here fast considering it was out of stock. The sales person had SKB send it to me directly and I couldn't have been more pleased.
Michael D.
From the minute I placed my order I was kept well-informed through each step in your process. Even though I was buying a comparatively modest piece of gear, your attention to detail made me feel like I was purchasing a six-figure mixing desk.
Thomas W.
I am a new customer of yours. You guys provided me the absolute best deals in ordering all the equipment to power my brand new recording studio. Your customer service is amazing and i will always deal with you from here on out.
Rob M.
Thanks for your great service and getting this out today. You guys really are the Kings!
Alan B.
Better than expected! Truly impeccable service. Your team was professional, knowledgeable, provided speedy delivery above and beyond standard. Vintage King Audio is definitely my go to for all of my audio and information needs.
James O.