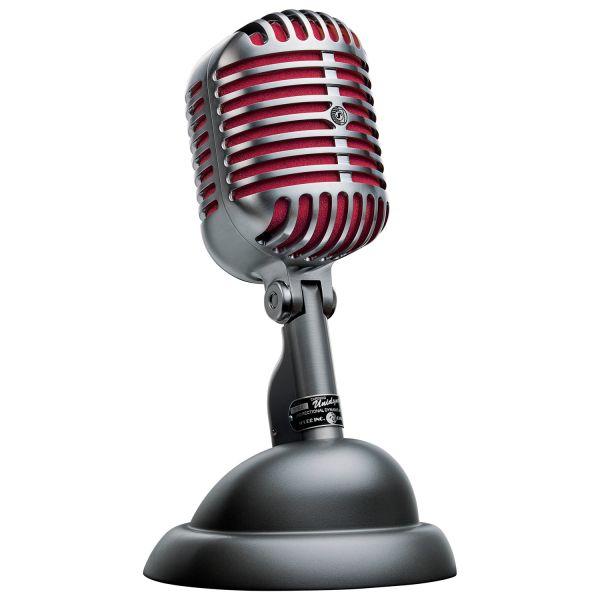 BRINGING BACK A CLASSIC MICROPHONE

Since its inception in 1939, Shure’s 55 Unidyne has been known as the microphone of choice in the worlds of public address, recording and broadcasting. Revitalizing the microphone for a whole new generation in 2015, the world-renowned Chicago-based brand has introduced a special anniversary edition of the microphone that replicates the original design with some modern improvements.

While Shure continues to make direct decedents of the original 55 Unidyne, including the 55SH Series II and Super 55, the 2015 edition of the 5575LE features new advancements to reflect the current state of microphones. With a larger overall size, like the original model from 1939, and a cardioid element, Shure has created a microphone that has vintage look and flavor, while also offering extremely accurate and superior sounds.

Whether you’re looking to use the Shure 5575LE for podcast, stage, broadcast or religious services, the microphone’s cardioid polar pattern is incredibly reliable for capturing vocals. With a Frequency Response of 50 to 16,000 Hz and shock-mounted cartridge, Shure has made it possible to relieve your recordings of outside and undesired noises, leaving you with perfectly recorded live vocals, speeches and voiceovers.

Shure’s updated version of the 55 Unidyne takes the most beloved parts of the original and gives them a slight facelift for 2015. The microphone features a larger body, an original birdcage-like grille and a retro-styled desk stand that fits nicely with the overall vintage aesthetic of the piece. Giving the 5575LE a blast of color, the microphone features a red foam cover that differs from the original’s look.

THE EXCLUSIVE ANNIVERSARY EDITION OF THE 5575

Honoring the 75th anniversary of the 55 Unidyne, Shure has created an outstanding presentation that not only includes this fantastic microphone, but some unique features in the packaging. Loaded into an impressive aluminum flight case, the 5575LE comes replete with a certificate of authenticity and two incredible photo prints of the Unidyne. With only 5575 of these microphones in the world, Shure’s limited edition run of the 5575LE are hot commodities for both their sound and rareness.

Please fill out the form below and a Vintage King Audio Consultant will contact you with a ship date for the Shure 5575LE - Limited Edition.

Have a better price in mind for the Shure 5575LE - Limited Edition that you've been checking out? We're willing to work on it!Please fill out the form below with your contact information.Once the form is submitted, a Vintage King Audio Consultant will contact you as soon as possible with our best price on this product.