The first studio-quality portable solution with 20 analog inputs, 12 mic preamps and DSP effects, with a free suite of over 30 proprietary plug-ins
MFR# Zen Studio
Shop All Antelope Audio
Skip to the end of the images gallery 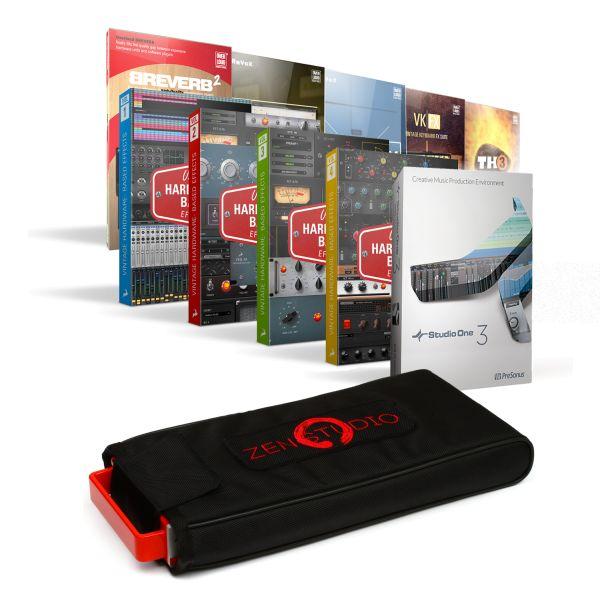 The Antelope Audio Zen Studio is a professional and portable audio interface with the most competitive analog and digital connectivity out there.  With 20 analog ins, 14 outs, along with 12 world-class mic pres, Antelope's signature clocking, the on-board DSP effects with multiple monitor mixers and the proprietary low-latency USB connectivity make Zen a world-class mobile recording system, that can fit easily inside a backpack or gear bag. Zen Studio is designed to meet the needs of the modern day producer or engineer on-the-go, as well as location sound engineers, sound designers, independent bands and musicians in search of greater sound quality and flexibility.

Supreme sound
Antelope Audio Acoustically Focused Clocking guarantees the most authentic analog sounding  A/D & D/A conversion on the market. Antelope's clocking and conversion along with the custom USB technology implemented in Zen are identical to the ones in the top-selling 32-channel Orion interface which is a centerpiece in the playback rigs for artists such as Rihanna, Jay-Z and Justin Timberlake, and inside the mixing and mastering studios of engineers like Eric Sarafin (aka Mixerman), Brian Vibberts, Howie Weinberg or electronic music producers like Robert Babicz and Dusty Kid.

Power and flexibility
In addition to proven sound quality, Zen Studio offers an extremely powerful DSP, based on a custom FPGA device with massive parallel processing capabilities. The proprietary FPGA makes the DSP chip in Zen Studio eight times more powerful than the ones used in similar devices. This allows fast and easy simultaneous processing of multiple effects, enhancing the workflow like no other device on the market.

Unique versatility
All audio I/O is available simultaneously for a total of 38 possible input and 32 output channels, plus 24 simultaneous I/O channels via custom USB, supporting 24-bit, 192 kHz audio. Users can create up to four independent zero-latency mixes assignable to any outputs, including the two independent headphone outputs and monitor outputs. The unit is fully controllable using an intuitive desktop application on both PC and Mac, offering flexible signal routing and DSP-based effects alongside custom presets.

Zen Studio is a versatile stand-alone device as well as a perfect companion to Orion32. Zen was born out of the need for a studio-quality portable solution  that can easily be taken with you, while your main interface remains in the rack. Zen Studio is based on proven technologies used in Orion32. Whereas the rack-mountable Orion32 stands out with its MADI connectivity and unmatched channel count available over USB, Zen Studio delivers a breakthrough number of mic pres and DI instrument inputs for a mobile-sized interface, along with exceptional monitoring and tracking DSP capabilities to be used on-the-go.

There isn't a lot of opportunity in Columbus, Ohio to listen to or test a lot of high end recording interfaces. Even with all the resources online to be able to research products, at some point you have to put your faith in someone that they are going to steer you in the right direction.

I'd heard a fair number of recordings done on other similar units. And I had a lot of choices, obviously. I finally put my faith in Jeff Ehrenberg and Vintage King. For my needs, the Antelope Zen Studio was the way to go. "You're going to love it," said Jeff. But I'm burying the lead.

I do love it. Conversion is stellar. Preamps sound wonderful. Negligible latency recording in Pro Tools 11 (about to go to PT12 in a minute). Clarity but not sterile. Its very "analog" sounding.

Anyway, a great big thank you to Jeff and the folks at Vintage King for setting me up. I'll be calling you soon cuz I think ima gonna need that little bag and the rackmount. - Elisa

Please fill out the form below and a Vintage King Audio Consultant will contact you with a ship date for the Antelope Audio Zen Studio.

Have a better price in mind for the Antelope Audio Zen Studio that you've been checking out? We're willing to work on it!Please fill out the form below with your contact information.Once the form is submitted, a Vintage King Audio Consultant will contact you as soon as possible with our best price on this product.

VIEW
37256
I would like to thank VK for the wonderful sales assistance, service and prices. This was my first purchase with you and it won't be my last. I only wish I'd discovered you years ago!
Matthew R.
I had two Grammy wins this year - Ray LaMontagne & Carolina Chocolate Drops. Both made with help from Vintage King!
Ryan F.
In almost 20 years in Pro audio buying, never did I receive a unit so well packed and exactly as described. Works flawlessly. The whole process has been so smooth. I will never hesitate to do business with you guys in the future and will recommend you to everyone I know.
Martin C.
This was my first experience buying something from Vintage King (although I surf the "used" categories on the website frequently!), and, despite being on the other side of the world, I had absolutely no trouble and everything went very smoothly.
Phil T.
The speed of delivery exceeded my expectations! I was VERY pleased that my shipment arrived in time for a scheduled vocal tracking session. The packing insured that my order arrived safely. And the sales staff responded quickly to questions regarding the product.
James P.
Thank you so much! Vintage King has been so fair and easy to work with. I can't thank you enough. It feels good to trust such a hefty purchase to folks who are so helpful and knowledgeable. Vintage King is a sound designers dream store.
Noa L.
You guys have excellent customer service and I am excited about the next upgrade I complete on my fifth recording facility. I've been in the studio business for forty plus years. The salesman I worked with at Vintage King was the best of the best. You all rock!
Robby T.
I would recommend Vintage King to any one looking for top-class gear, unbeatable customer service and the best prices on the map!
Jake D.
My experience with Vintage King was excellent. The order was here fast considering it was out of stock. The sales person had SKB send it to me directly and I couldn't have been more pleased.
Michael D.
From the minute I placed my order I was kept well-informed through each step in your process. Even though I was buying a comparatively modest piece of gear, your attention to detail made me feel like I was purchasing a six-figure mixing desk.
Thomas W.
I am a new customer of yours. You guys provided me the absolute best deals in ordering all the equipment to power my brand new recording studio. Your customer service is amazing and i will always deal with you from here on out.
Rob M.
Thanks for your great service and getting this out today. You guys really are the Kings!
Alan B.
Better than expected! Truly impeccable service. Your team was professional, knowledgeable, provided speedy delivery above and beyond standard. Vintage King Audio is definitely my go to for all of my audio and information needs.
James O.