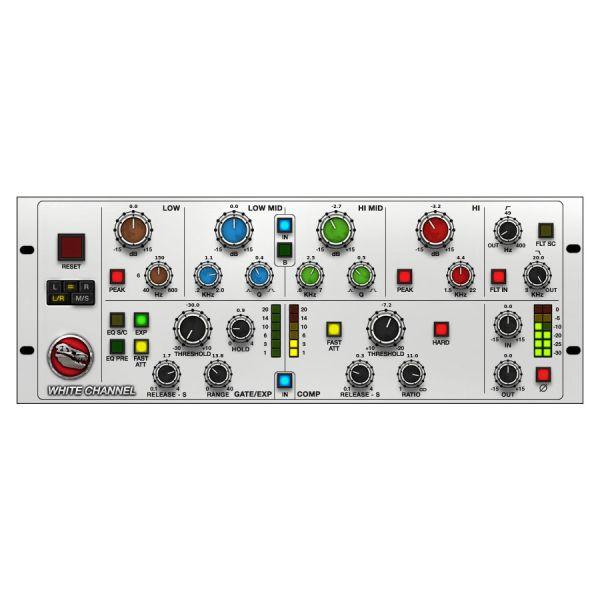 The IK Multimedia White Channel is the modern counterpart to the acclaimed British Channel, and is a dead-on recreation of a contemporary, high-resolution large-format analog console's channel strip. The facilities of this plug-in are quite the same as in the British Channel, but the circuit design of the original hardware was conceived with a more modern approach to high bandwidth and signal to noise ratio. IK paid special attention to have these features closely matched in our model.

As in its vintage sibling the EQ section features a dual-mode operation for maximum flexibility and tone, so Black and Brown circuit designs can be accessed on the fly (and as in the British Channel they are reflected by the low shelf EQ knob color).

The gate-expander/dynamics section has all the power to put you in control of your tracks, as it was designed with flexibility in mind; it can be placed before or after the EQ section or used in sidechain mode with the EQ or filter section. This feature is one of those that make this channel strip super flexible: compression placed before or after EQ can dramatically alter the way a track sounds; radically changing the EQ of the track before compressing it (like boosting large amounts of low end) will make the compressor “sense” different frequencies first, thus reacting in a different way compared to how it would behave if placed before EQ. This can be used very effectively to shape the track's sound, to the extremes of turning it into something radically different, a necessity often encountered in mixing.

Gating is very effective to keep noisy tracks at bay; one of its main uses is on drums and percussion sources: in a multi-mic’d kit there could be excessive bleed from one channel to the adjacent one. The wealth of controls of the gate section allows to reduce the unwanted noise between tom channels (a classic use of the gating), in order to bring it to a more manageable level, still keeping enough of it to add fullness to the sound of the kit and its elements resonating together. It can also be used with extreme settings to abruptly cut out tails or low level noises in a track, in case more precise or processed tracks are needed. It's also very useful to give percussive tracks sharp attack and “snap” in the forefront.

Countless Hip Hop and R&B hits have been crafted on the console this processor was based on: its extended bandwidth makes it downright perfect on drums, guitars, bass and each track needing a full set of controls in one single module.

Please fill out the form below and a Vintage King Audio Consultant will contact you with a ship date for the IK Multimedia T-RackS White Channel - Electronic Delivery.

Have a better price in mind for the IK Multimedia T-RackS White Channel - Electronic Delivery that you've been checking out? We're willing to work on it!Please fill out the form below with your contact information.Once the form is submitted, a Vintage King Audio Consultant will contact you as soon as possible with our best price on this product.